Cloudy memories: Crystal Palace in the fog throughout time

Fog is rarely an issue for English football in the 21st century, with Crystal Palace not having a game postponed due to it in years.

However, in their 0-0 draw with Manchester United, the thousands confined to watching on TV were made to squint as the ball rolled along the far touchline, almost disappearing in the fog around the dugout.

Thankfully the game was able to continue without much issue, but the dense cloud hanging over Selhurst Park provided a unique and atmospheric sight.

Over time, of course, fog has provided a much more real threat to matches in England - particularly during the 1950s, when London was immersed in 'pea souper' smogs.

It was not uncommon for games in this era to be cancelled barely minutes from kick-off or, worse still, mid-game. One such occurrence in 1935 saw Palace and Bristol City made to leave the pitch after a staggering 80 minutes with the game at 1-1 before visibility became too poor to continue. 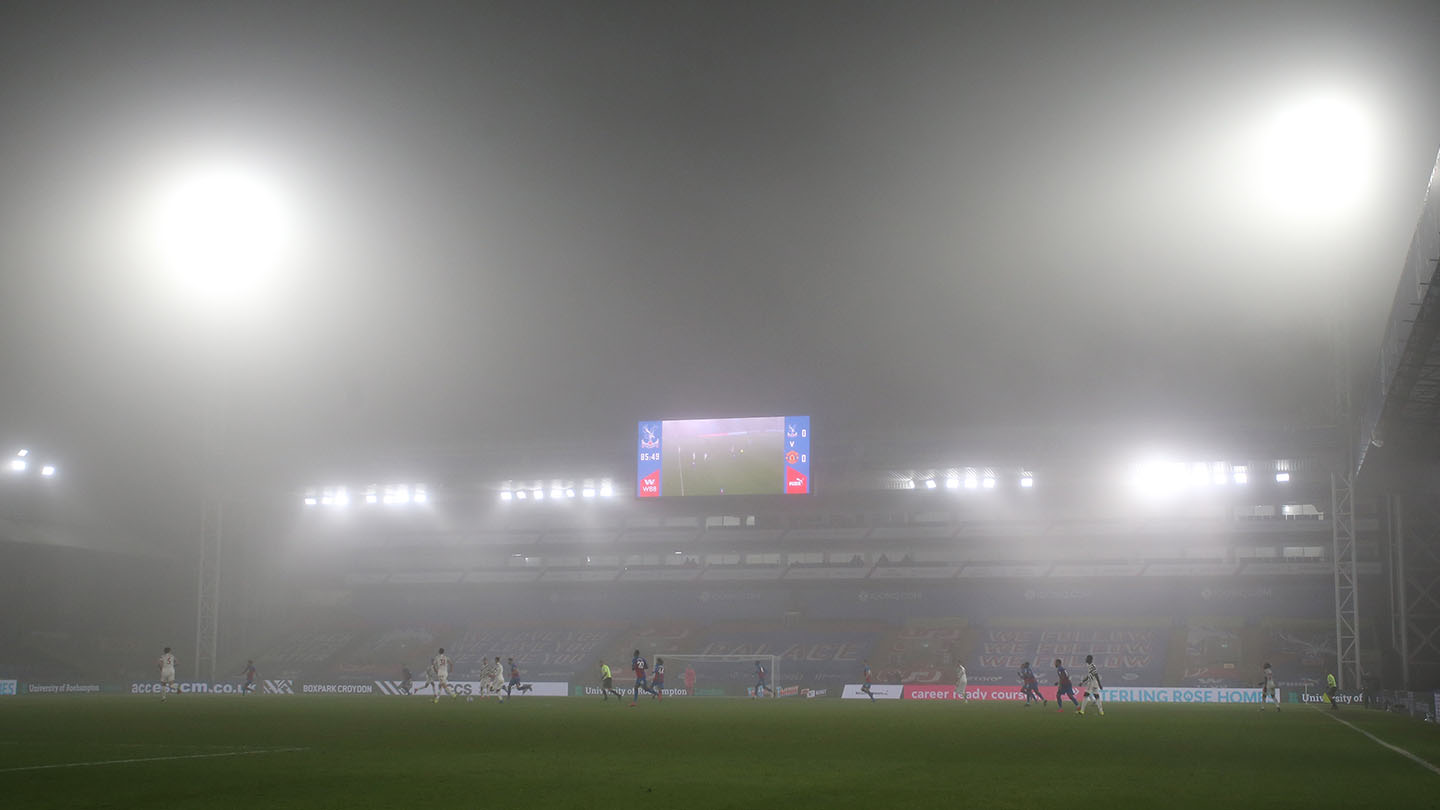 The FA Cup appears to attract such events, too. Palace hosted Millwall in the 1950/51 tournament before the game was abandoned in the 34th-minute. Naturally, south London's No.1 side went on to lose the replay 1-4.

Years later, in the 90/91 FA Cup, supporters were well on their way to Nottingham Forest's City Ground when news spread that fog had forced the game off for a third time. Each postponement was caused by a different issue in 1991 - with rain and ice delaying the meetings before this instance.

All in all, the Eagles arranged seven fixtures with Forest between 6th January and 2nd February, fulfilling four.

The FA Cup continued to produce fog-related drama, perhaps none more so than in December 1952, when the Great Smog of London brought the city to a halt.

Palace - or at least parts of Palace - travelled to north London's Finchley Town for an FA Cup clash on December 6th, 1952.

But not everyone made it as far as N12. Two Palace players and a linesman ended up stuck on the North Circular with the fog too thick to drive through and so appeals rang over the Tannoy system for officials or players to take their place.

The reseve-team's Bob Bishop happened to be watching that day and stepped forward for his first-team debut at centre-forward. The tie began on a frozen pitch and, with Finchley 3-1 ahead in the 63rd-minute, the refereed halted play to wait for visibility to improve.

After a short pause, the game was abandoned and Bishop saw his only senior appearance expunged from the records. That didn't limit his passion for the club, however, as he went on to become a club director in the 1970s.

Another notable Palace man, Ronnie Rooke, who managed the club in 1949/50, endured an undignified experience while representing Arsenal as a guest shortly before moving to SE25.

The Gunners were facing a touring Moscow Dynamo, with a dense fog enshrouding the pitch and their team - featuring just five actual Arsenal players and six ‘guests’, including Stanley Matthews and Stan Mortensen - were astonished the game went ahead at all.

Even before kick-off, signs of a farcical 90 minutes to come were prevalent when the tradition of presenting flowers from the visitors to the hosts was abandoned. The crowd, it was reasoned, wouldn’t have seen the centre-circle spectacle through the cloud in front of them.

During the match, officials missed countless decisions in the fog and, when Vasili Trofimov stayed on the pitch for 20 minutes after being ‘subbed off’, no one was any the wiser.

Battling to heave his host club into the ascendancy having scored the Gunners’ first goal, Rooke found himself carrying Dynamo’s Mikhail Semichastny on his back as the Russian sought to prevent the forward from striking.

Trying to lodge Semichastny from his body, Rooke swung an elbow back and caught Semichastny square in the face. Leaving his marker with a black eye, Rooke went on to bury the ball only for referee Nikolay Latyshev to disallow the effort for foul play on the striker’s behalf.

In the gallery above, you can see other, more recent instances where fog has troubled fans and players alike at Palace games.

For more on the United clash, squint through the highlights below!

READ NEXT: Long read - When Puskas came to Selhurst Park