James McArthur looked back on some of his favourite memories so far as he became the latest player to reach the impressive milestone of 300 Premier League appearances.

The tireless midfielder spoke with Palace TV to recall some of his favourite games – as well as a less-than-fortunate debut in the competition.

“There’s a good few to be honest,” he said. “Beating the Manchester clubs has been amazing – whenever you beat the bigger boys.

“Scoring away to Arsenal when we won 3-2 was a nice moment. There are a lot of nice moments. 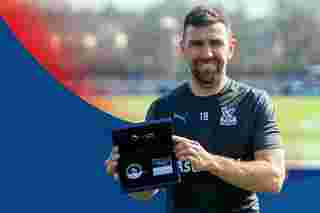 “[On my debut] we got beat 4-0 off Blackpool when they first came up! It was a bittersweet moment for me really to make your Premier League debut.

“You obviously grow up watching it and to make your debut is great, but to lose 4-0 is disappointing.”

More than a decade of Premier League experience has taught McArthur a great deal, and he explained how his game had changed over the years – as well as admitting a simple ambition for the rest of the season.

“I’ve learned the game a lot more,” he said. “I was going to say when you’re a young kid, you run about like a young kid – but I still try to do that now!

“I’ll look back on [reaching 300 games] when I’m finished and appreciate it, but now I’m just trying to get fit and get in the team to play more.

“Get fit, play games and hopefully win against Chelsea and get to another final.”