Last season, Crystal Palace staked its claim to be recognised as the oldest league club in existence still playing professional football – with new research showing a direct lineage between the professional club thought to have been founded in 1905 and the amateur side formed in 1861.

October 26th is the anniversary of the Football Association's founding, with the formation proposed, seconded and carried at the first meeting 158 years ago that day. Established in 1861, Palace was a fully formed club by the time 12 London and suburban teams met to devise “a definite code of rules for the regulation of the game” in 1863.

Meeting at the Freemasons’ Tavern (above image) on October 26th, 1863, those 12 clubs formed the FA, English football’s governing body.

As the FA formulated its rules, five further meetings followed and Crystal Palace sent more delegates (seven) than any other club – helping to push through association football against stiff opposition from rugby-favouring clubs.

After the first meeting, Frank Day handed over to James Turner, Crystal Palace’s captain in 1863. Today, Turner is regarded as a ‘founding father’ of the FA, and his name first appears in the FA minutes book when seconding a proposal to adopt ‘Cambridge rules’ style football. 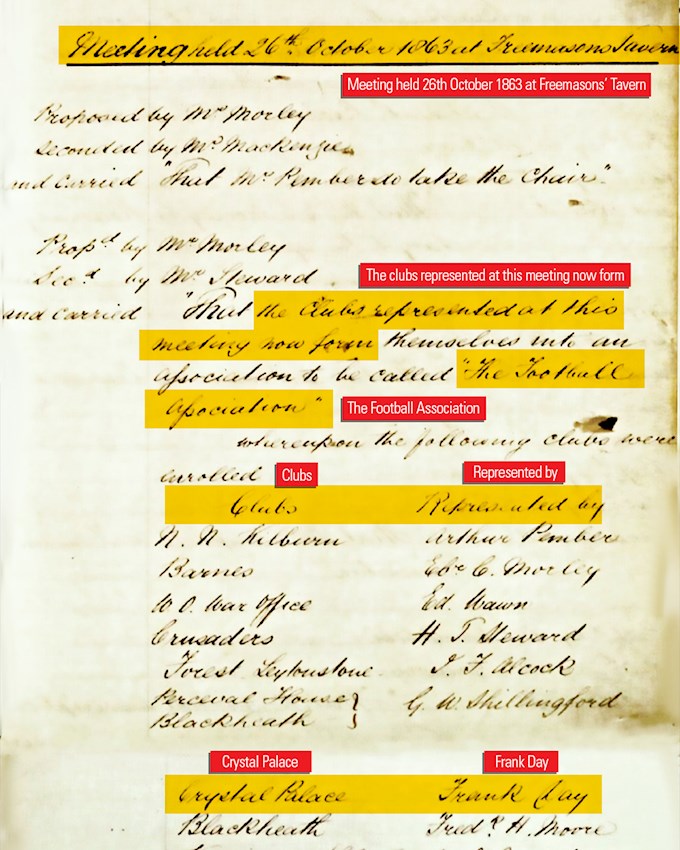 This proposal resulted in the FA banning ‘hacking’ (kicking in the shins) and ‘carrying’ (holding the ball in one’s hands) from its laws, creating the style of football seen today and triggering the resignation of three rugby clubs from the FA.

The first match using the new association football rules was meant to be played in January 1864, but Barnes and Richmond F.C. jumped the gun and applied them on 19th December 1863 in what was reported to be a good-natured game.

However, when the official inaugural match went ahead in Battersea Park on 2nd January 1864, Crystal Palace provided at least three of the players in the historic 14-a-side game between the President’s team and the Secretary’s team.

But Palace’s involvement in modern football history doesn’t end there.

The FA was very fragile in its early years and its new Secretary, Charles Alcock, was always looking for new ideas to expand association football. In 1871 he came up with the idea of a Challenge Cup open to all FA members across the country, to be called the Football Association Challenge Cup.

By 1871/72, the inaugural FA Cup had been born, and Palace competed in its first round with a victory over Hitchin F.C. In fact, the club even reached the semi-finals that season, falling to Royal Engineers in a replay on 9th March, 1872.

Over 30 years later, by the time Crystal Palace turned professional in 1905, they played at the same stadium which hosted the nationwide FA Cup as England became gripped by football.

Right from the start, Palace had a hand in it all.