Fan Memories: Half a century on from Crystal Palace 3-1 Stoke City

Most Palace fans remember their first match and mine happens to be 50 years ago this week. To give younger fans a bit of context, this was the week the movie Butch Cassidy and the Sundance Kid hit the cinemas and the No.1 single was In The Year 2525, which sounded like science fiction back then, but is now frighteningly just around the corner. Well, it’s a bit closer.

Palace had won a first ever promotion to the old Division One and my father (a parsimonious Scot straight out of central casting) manged to borrow two season tickets from a holidaying workmate and we set off from deepest Essex on the journey to SE25.

Brought up within spitting distance of Upton Park (and God knows I tried) I should have been a West Ham fan, but this workmate (let’s name names – thank you Bill Blacker) had been sending me home programmes since the mid-sixties (an obsession I continue to this day) and I was hopelessly hooked. 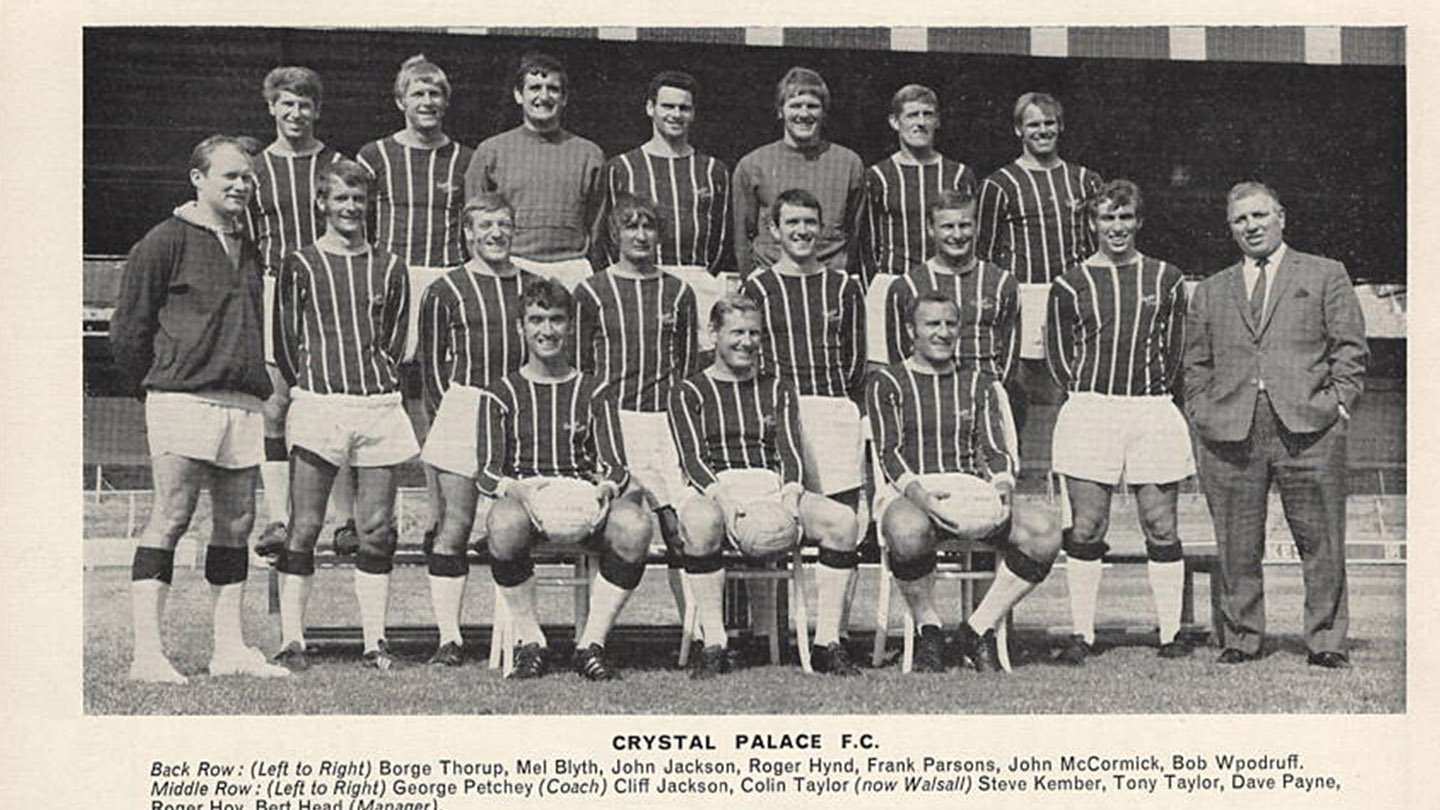 My first game was against Stoke City, whose line-up included the world’s greatest goalkeeper Gordon Banks and a pack of names and faces I knew only from my rabid Soccer Star collecting – Ritchie, Eastham, Greenhoff, Dobing and an agricultural centre half called Denis Smith whose job was to kick anything that came within a yard of him. Even his own players. And very occasionally, the ball.

Years later I read Nick Hornby’s book Fever Pitch and smiled at the description of his first ever game. Like him, at Selhurst Park that day, the sky was azure blue, the pitch immaculate and vivid green; the fans laughed and sang for 90 minutes and Palace played like Brazil.

It’s fun to compare those far away recollections and the actual facts. In a dreadful first season in the top-flight this would be just one of six wins – this one being a 3-1 victory and the only time we scored more than a couple of goals in a game.

We survived in the top-flight by just a single point. My version of the game had the claret and blue army peppering Banks’s goal with chance after chance. We were impossibly quick; John McCormick and Mel Blyth unforgivingly rock solid in defence; little Stevie Kember covering every blade of grass; Mark Lazarus dashing down the wing like a whippet; Bobby Woodruff taking throw-ins that could hit the next postcode and big John Jackson standing like a great green colossus in goal, stopping anything the Stoke front line could throw at him.

Not that long ago, a friend at the BBC managed to retrieve a grainy black and white video of the game that played on the regional version of that night’s Match of the Day. Imagine my surprise when I realised that the game in my memory and the actual game itself were quite different. 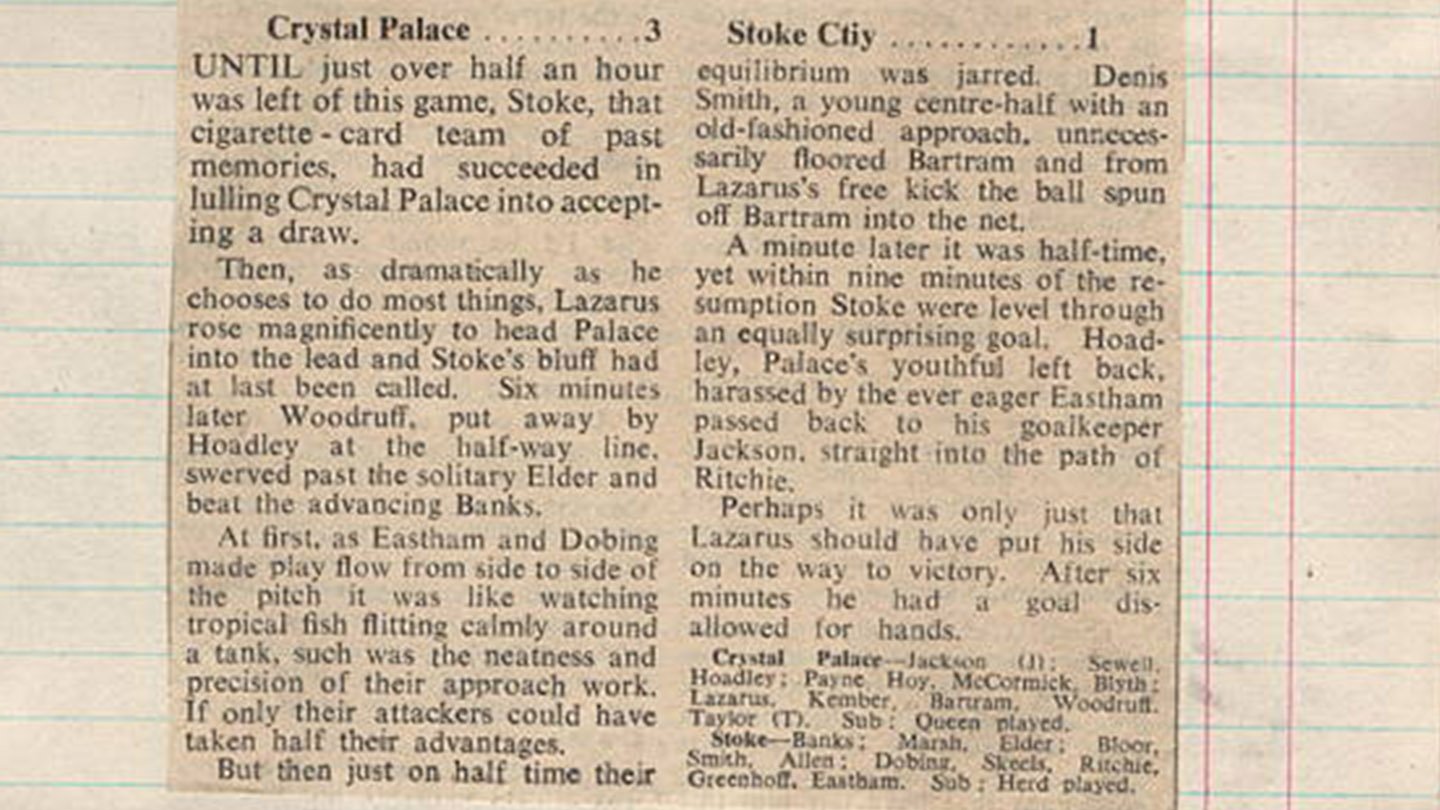 In truth the Palace side of 69/70 was an incredibly tight, hardworking, but largely limited bunch of players and they found the jump to the First Division hard going. To me, back then the crowd seemed huge, but it was only just over 26,000 in a stadium that boasted a few 48,000-plus attendances that season.

So it’s hardly a surprise that the game wasn’t exactly how I remembered it either. For an hour or so Stoke played us off the pitch and only Jacko’s reflexes kept us in it.

Maybe our lack of ideas lulled them into a false sense of security because just on half time Smith flattened our new Danish centre forward Per Bartram and from Lazarus’s free kick the ball cannoned in off the surprised Dane’s arse for 1-0. The half time talk clearly did the trick (at least for Stoke) and they were level nine minutes into the second half.

But on the hour Lazarus rose to meet Tony Taylor’s cross and head us back in front. Stoke went all out attack and helpfully left acres of space behind them. Woodruff took full advantage on the break, latching on to 17-year-old Phil Hoadley’s 40-yard pass (yes, it actually was), slipping a defender and sweeping the ball past the advancing Banks for 3-1.

Delirium. No-one was quite sure how we’d done it. But we’d done it. There was no hanging about for autographs, Dad wanted to get home for tea or Dixon of Dock Green or something grown-up, so it was a route march back to Norwood Junction and the long haul home. But I’ve never forgotten that game.

Well, quite clearly I’d forgotten quite a lot of it actually. But I still have the scrapbook and the actual programme from the day (one shilling) with Dad’s team changes in it. The old man passed many years ago and, I suspect, his friend the season ticket holder, too. But along with my own son we’re keeping the tradition going (though I pay for our season tickets).

With thanks to Palace fan, Neil Duncanson, for sending in this wonderful trip down memory lane.