The club received hundreds of tweets and emails after the launch of our Palace in the Attic campaign – it was great to see, read and share so many wonderful and unique items that make up a part of fans’ connections to the Eagles and the history of our proud football club.

One fan in particular sent in tens of items, some over 100-years-old to more recent memorabilia from play-off finals.

We reached out to this fan, David London, and he revealed that he had only sent in a handful of items from his wide-ranging collection.

“I've been collecting Palace memorabilia keenly for 30+ years and I think I have a good eye for rare and unusual stuff that doesn't come up very often,” he explained. “But collecting really doesn't always have to be expensive - sometimes I come across a retro 1970s souvenir item and just have to have it - it usually costs me very little.

“I have some ghastly pottery I could share. That is worth under £20 whenever a similar item appears online, yet I couldn't bear to part with it.”

Ghastly pottery from the 1990 FA Cup final? We knew what we had to do. Therefore, we tasked David with selecting 10 of his most favoured Palace in the Attic items.

Enjoy his choices and the story David reveals behind each fascinating artefact – and don’t forget, if you’ve got something you like to share then tweet us using #PalaceInTheAttic or email us: attic@cpfc.co.uk.

Most Crystal Palace supporters of today will no doubt have enjoyed several exciting cup runs where they wondered if 'this was to be the year!’

The FA Cup run presented an opportunity to play the biggest clubs in the land. Palace beat Rotherham, First Division giants Newcastle United, Fulham and then Brentford, to find themselves in the quarter-final.

A 1-1 draw at the Crystal Palace meant a lucrative replay at the finest club ground in the country: Goodison Park.

Sadly, it was no fairy tale ending as Palace lost 4-0 but the programme itself, dating from 13th March, 1907 was actually a joint-issue, and also covered neighbours Liverpool reserve’s home game the same weekend. 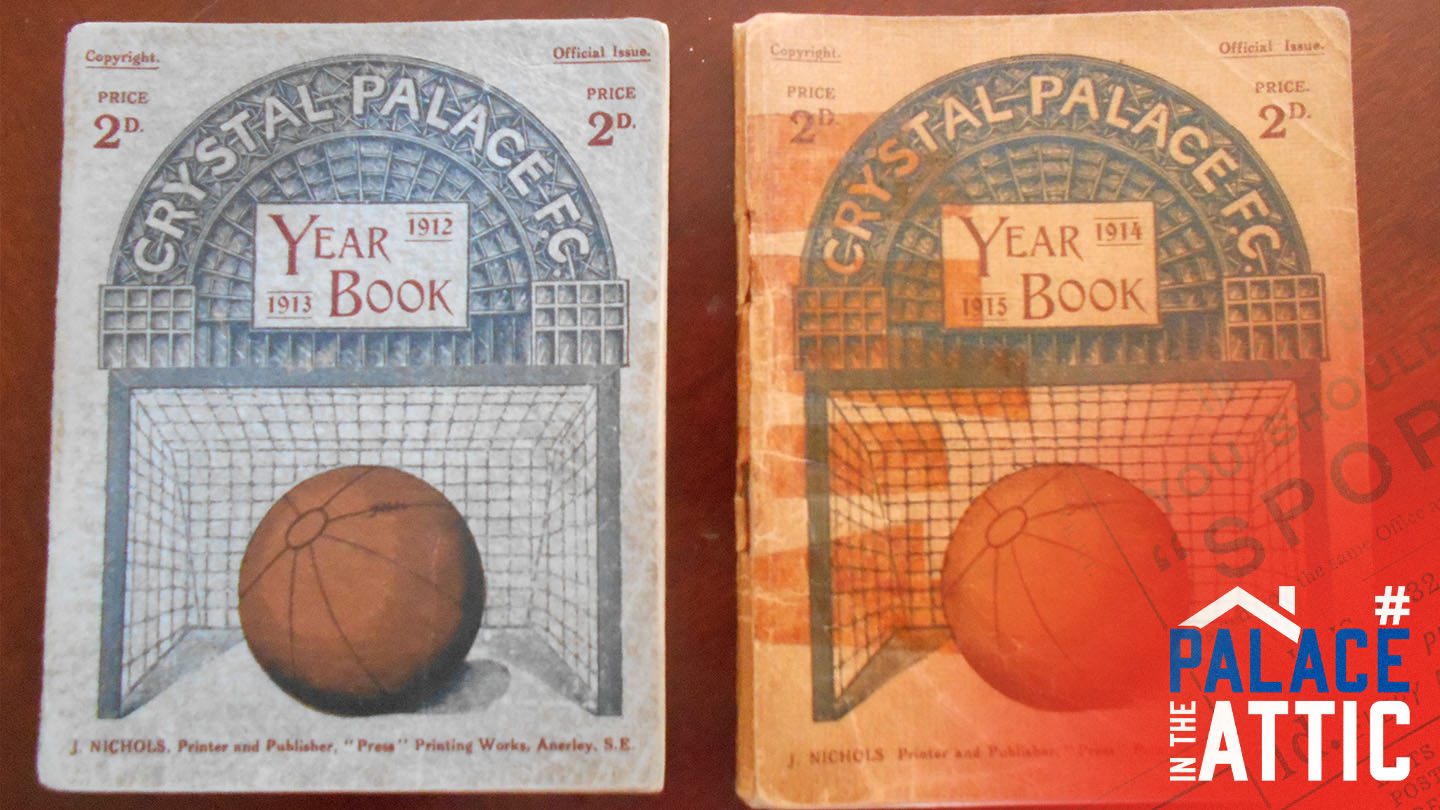 Before World War I, Crystal Palace played at the Cup Final Ground in the shadow of the vast glass exhibition building.

The main shareholders were the Crystal Palace Company, and they had ambitions of the club becoming one of the biggest in the country, and making it a real money-spinning attraction for their pleasure grounds.

These two yearbooks from 1912/13 and 1914/15 showed a desire for greater attendances, with the Chairman saying "our unwearying efforts to keep up a high-class team, and provide Saturday afternoon football of the very best sort, is deserving of better all-round support.”

Amongst the fixtures, results from the previous season and photos of the players was an advertisement for cannabis: ‘The certain cure for corns!’ – programme adverts have changed somewhat over the 100+ years…

The latter of the two handbooks was originally the property of goalkeeper Josh Johnson, who made 295 appearances for the Glaziers.

Original programme from the first game at Selhurst Park 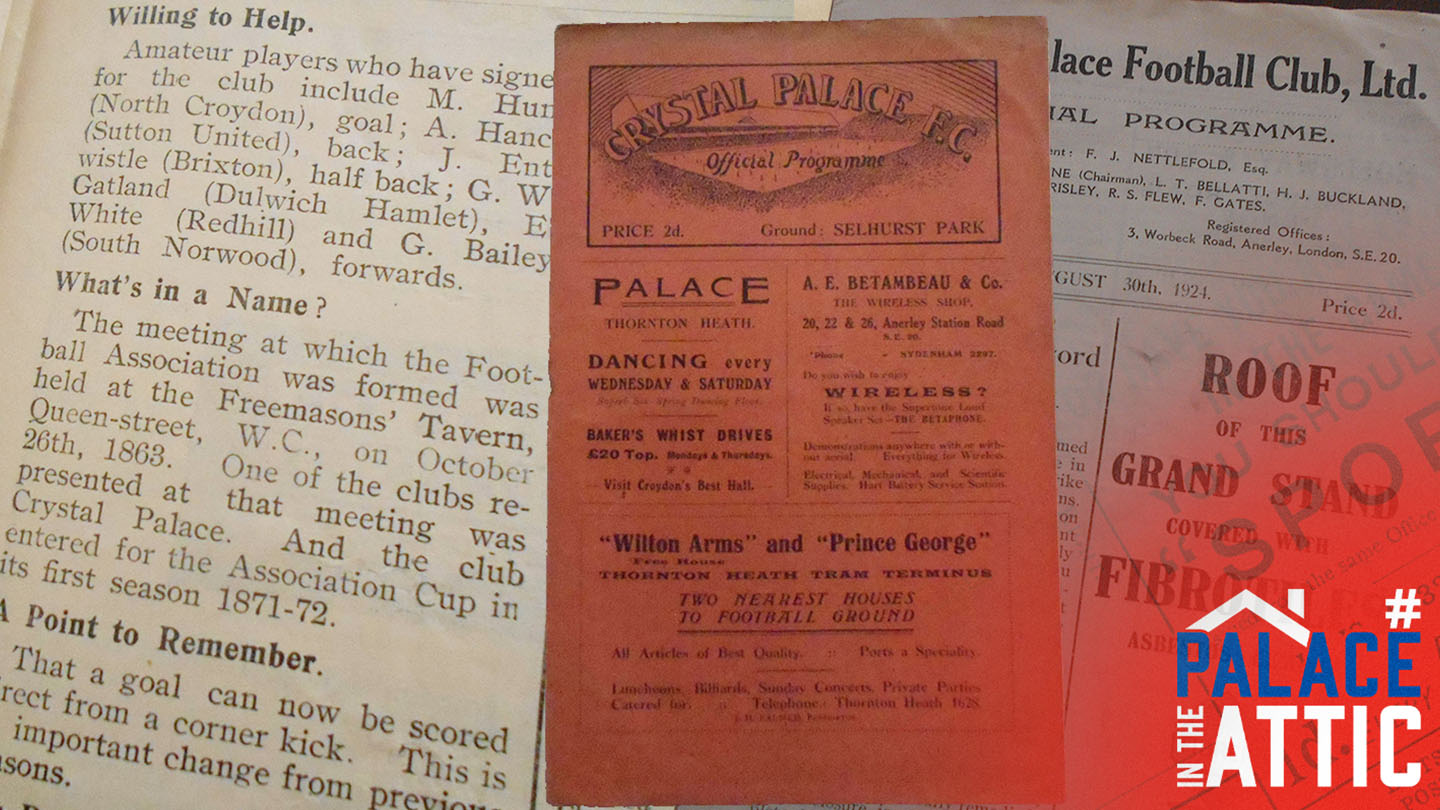 The first game at Selhurst Park was on the 30th August, 1924: a Division Two match against The Wednesday (now Sheffield Wednesday).

The programme featured an advertisement that advised that the roof of the grandstand was constructed with asbestos tiles - although readers will be pleased to know that these were since removed several decades ago! 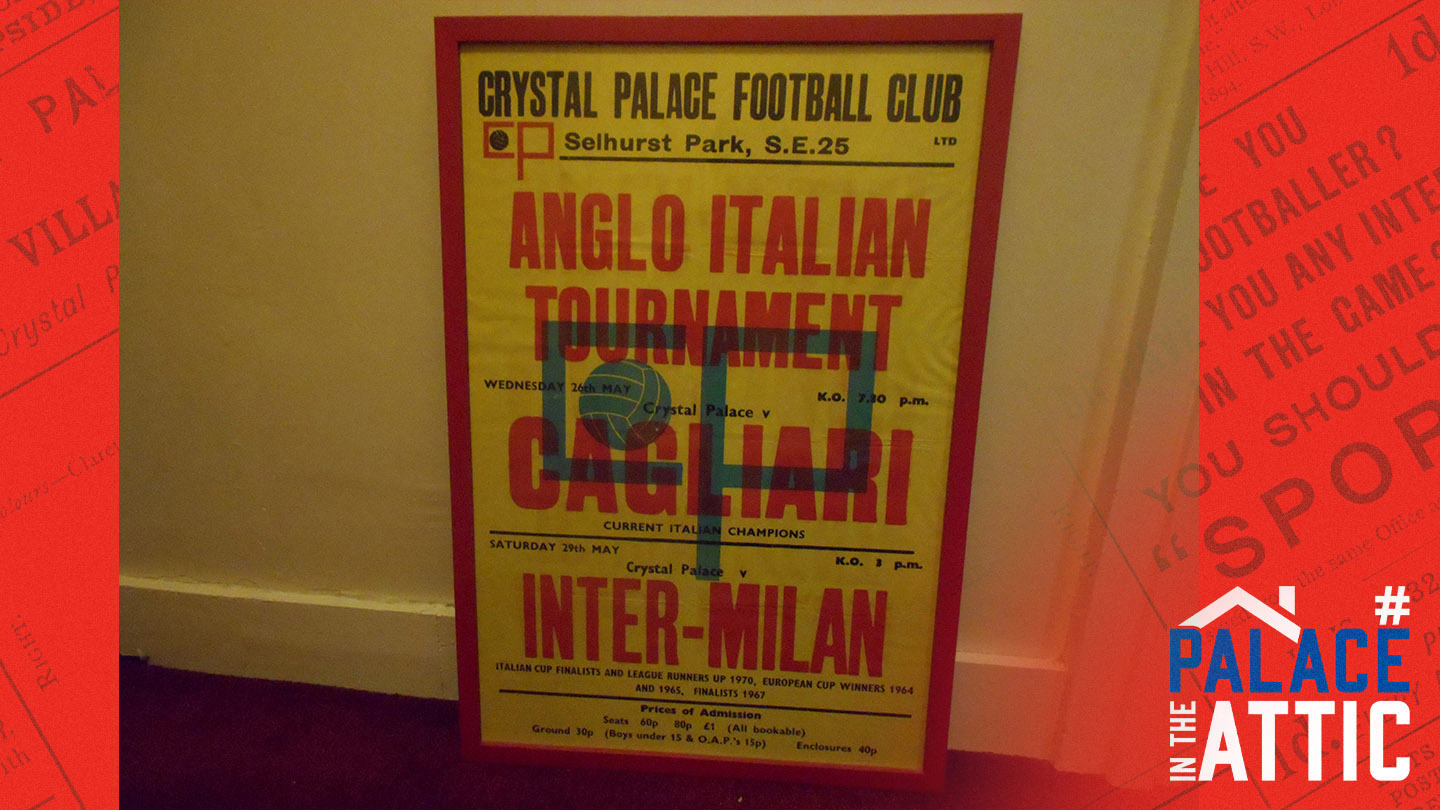 Crystal Palace have had few competitive matches against overseas opponents. However, the first big experience of a competitive international competition was their entry into the Anglo Italian Cup in the summer of 1971.

Palace were drawn to play 1971 Italian champions Cagliari and European giants Inter Milan, with games against both teams home and away.

This is a fixture poster for the two home games played within a week in June 1971 at Selhurst Park, giving details of the dates and ticket prices for the games.

Posters would have been pasted around the ground to publicise the games: 15p for under-15s was an absolute bargain, I would imagine!

Palace beat Cagliari 1-0, drew 1-1 with Inter Milan, and even won away 2-1 at the San Siro, but were narrowly eliminated from the competition at the end of the group stage.

I have had the poster framed because it really is a colourful item that certainly brightens a wall at home! 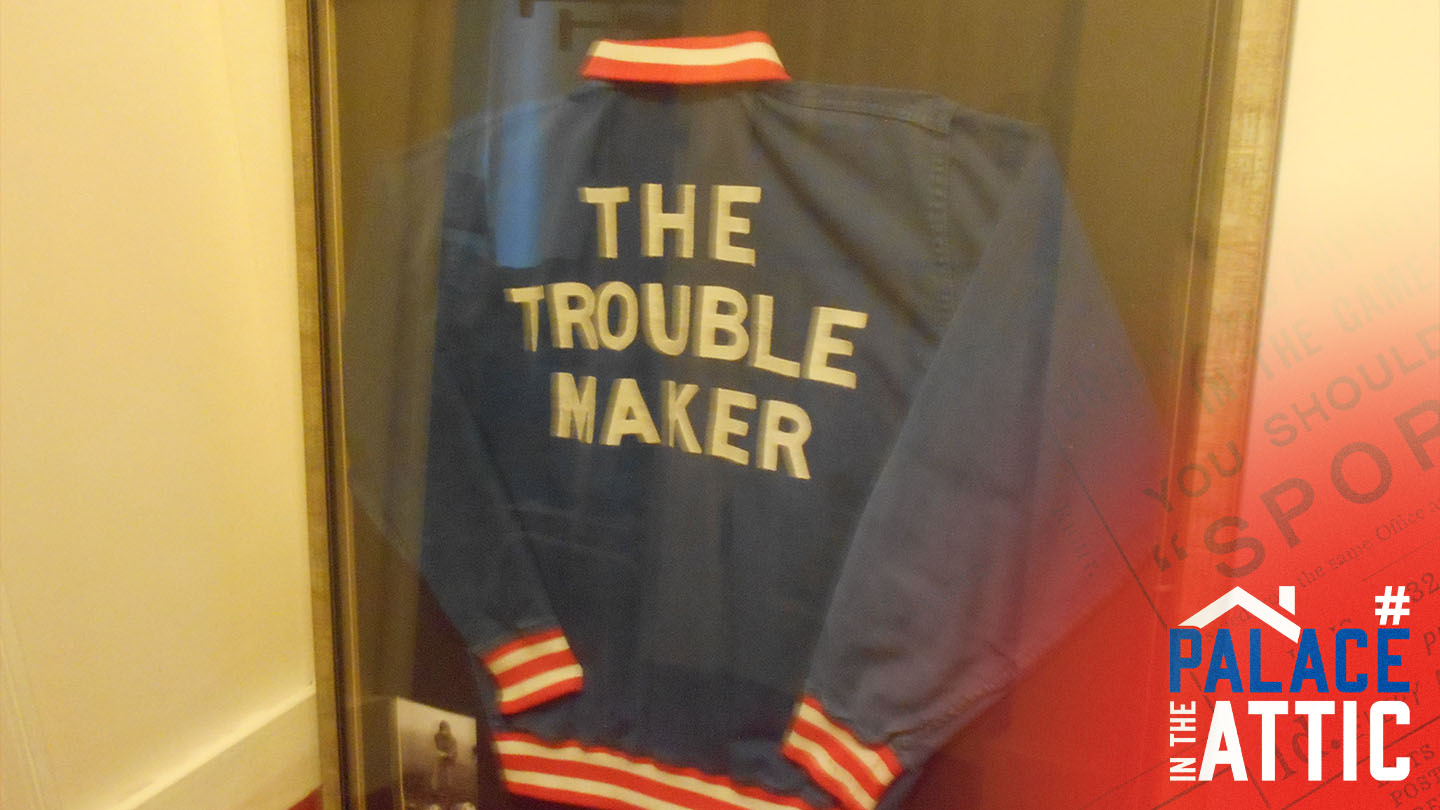 In the spring of 1973, Crystal Palace replaced legendary manager Bert Head with the flamboyant Malcolm Allison. Previously part of a successful Manchester City management team, Allison came to the club with many bold new ideas.

Allison replaced claret and blue with bright red and blue striped shirts, and also introduced an idea to raise the profile of the players by giving each one a nickname, which was not only listed on the matchday programme team line-ups page, but also on the back of each players warm-up jacket. Bobby Bell was the ‘Block Buster’, Tony Taylor the ‘Road Runner’ and so on.

This jacket was the one worn by star forward Don Rogers, and his nickname was the ‘Trouble Maker.’

The marketing gimmick was soon shelved when Palace found themselves near the bottom of the Second Division table, and at the end of the season the club were relegated to Division Three.

I framed the jacket myself inexpensively using a second-hand shirt frame which I picked up for a bargain £5 in a junk shop in Great Yarmouth. 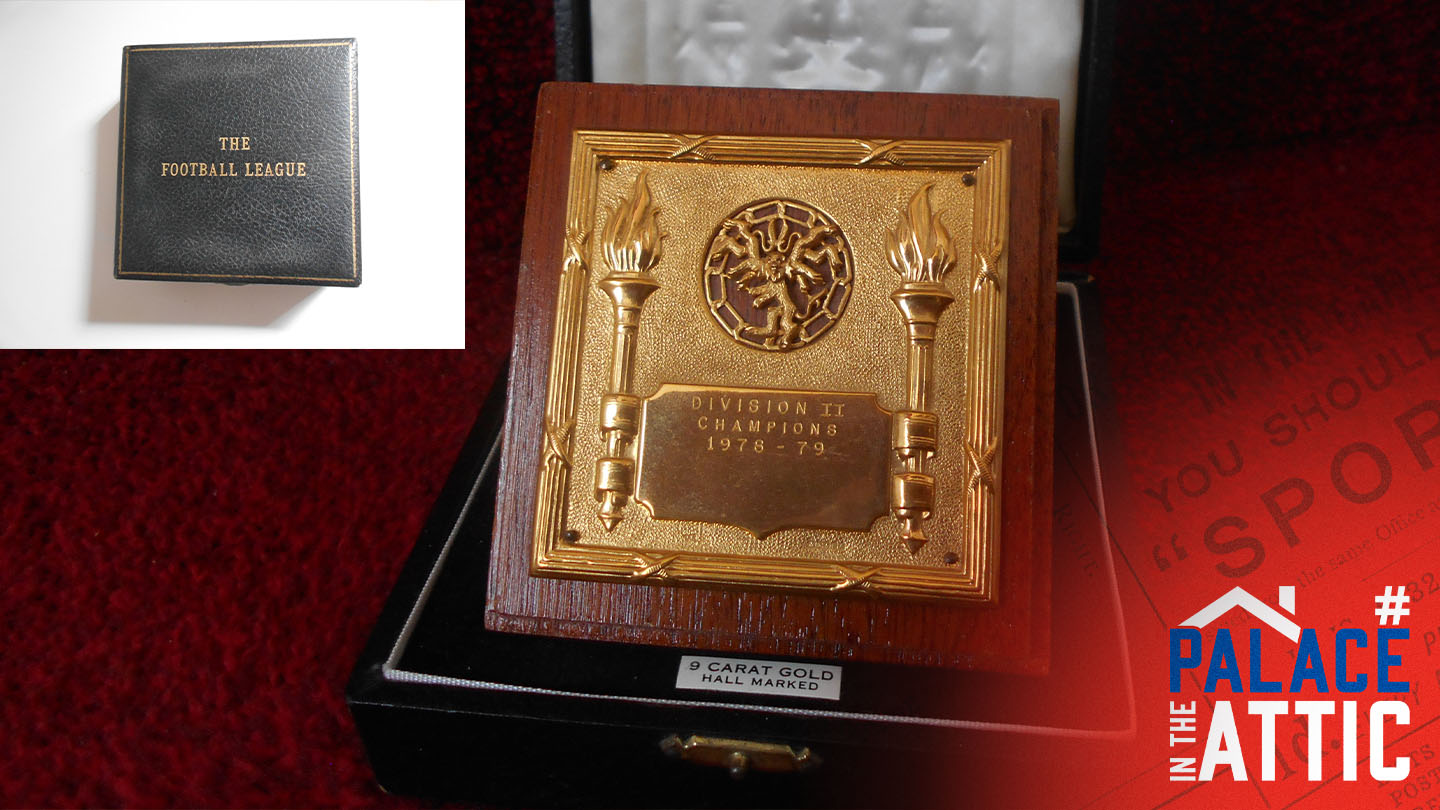 The 1978/79 season was a real tour de force for Crystal Palace. Losing just four of 42 games and conceding just 24 goals all season culminated in the Division Two title being memorably won at home against Burnley on 11th May, 1979.

With thousands of fans swarming the Selhurst pitch at the end of the game, the trophy and medals were not presented until before a pre-season match ahead of the 1979/80 season.

Unusually, instead of medals, for a few seasons in the late ‘70s the Football League issued boxed plaques to title-winning players. Manufactured by highly regarded company Vaughton's, this one belonged to the late Alan Leather, the long-serving CPFC club secretary. 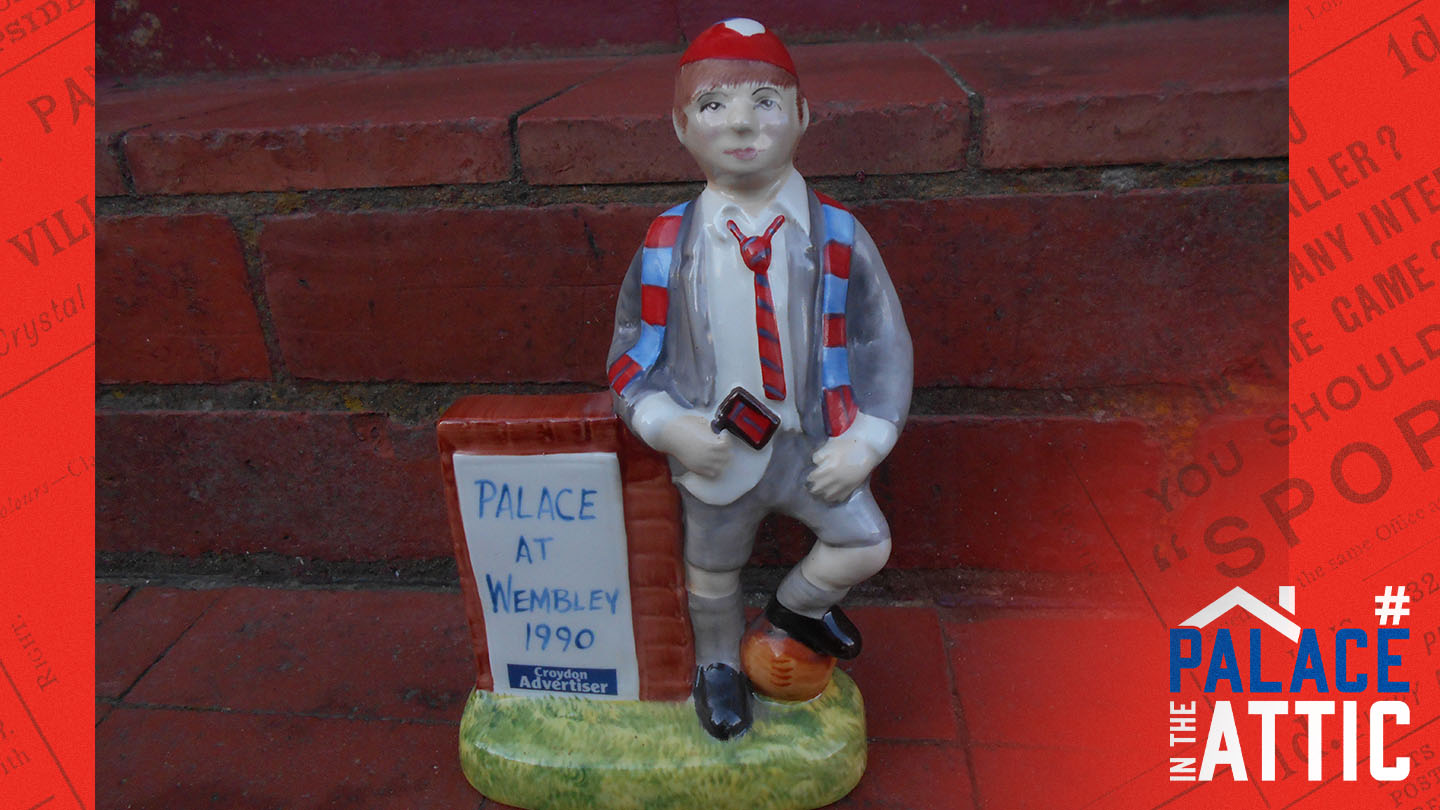 Reaching the 1990 FA Cup Final was a truly historic occasion for Crystal Palace and its supporters. The club shop was awash with commemorative merchandise to mark the occasion, and all manner or t-shirts, scarves, hats, badges and so on were produced and snapped up by fans eager to mark the occasion!

This particular item was one of the more peculiar, however. A china figure of what can best be described as a 1950s paperboy next to a billboard. The Croydon Advertiser were responsible for commissioning these figures, from a pottery in Stoke, and to this day this rather tacky and, to be honest, hideous item remains in my display cabinet - I cannot bear to part with it in spite of its rather unusual and quirky charm! 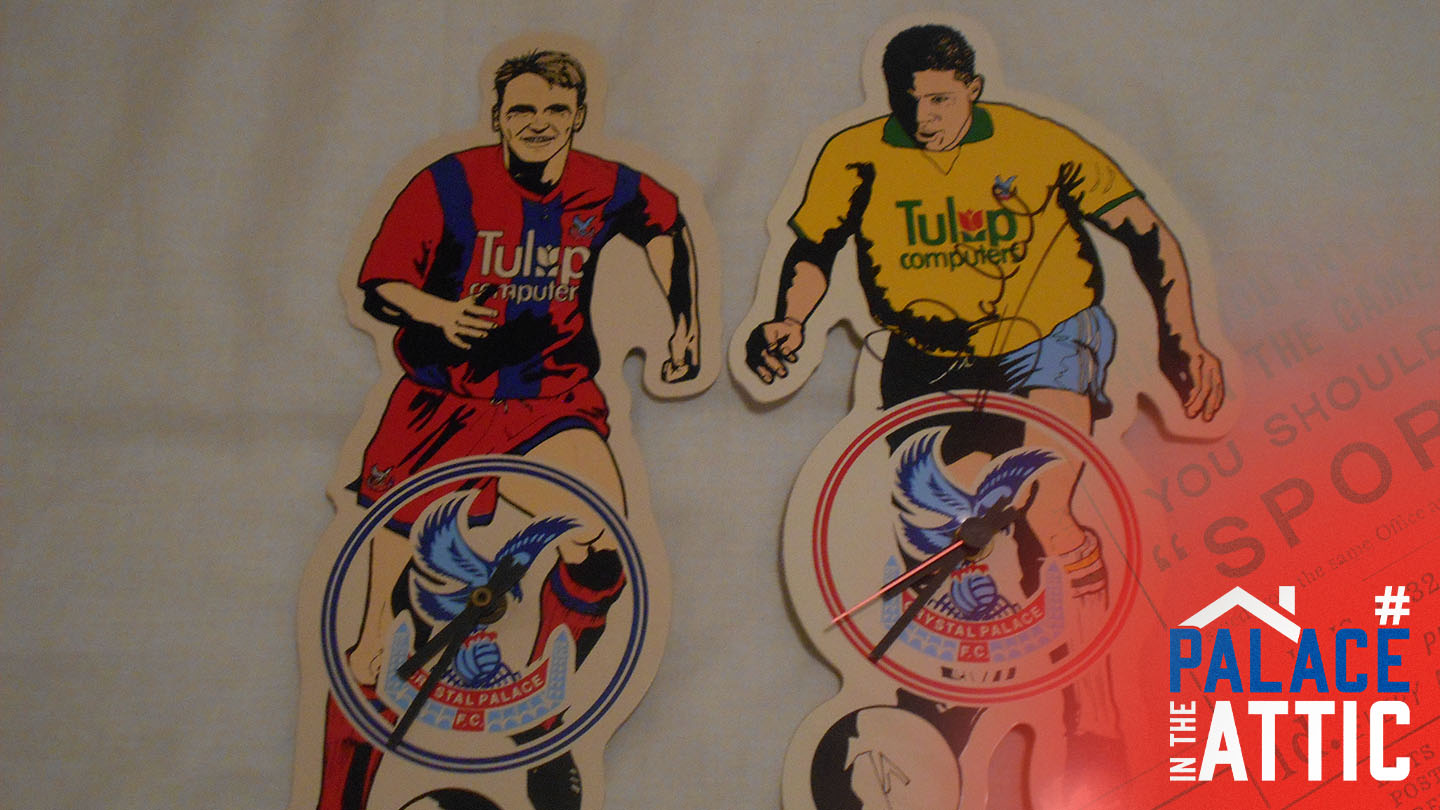 In 1991 Palace really were going places: a third-place finish in the First Division, a Wembley win in the Zenith Data Systems Cup final and seemingly limitless potential.

What more would youngsters want in their 1991 Christmas stocking from the official club shop, than one of these smart clocks?

Cheaply made from a thin sheet of plastic, they featured not only clearly recognisable illustrations of our England stars Geoff Thomas and John Salako, but also two of the nicest, most iconic Palace kits of all-time. Probably worth less now than they originally cost but, to a collector of Palace memorabilia, these are priceless! 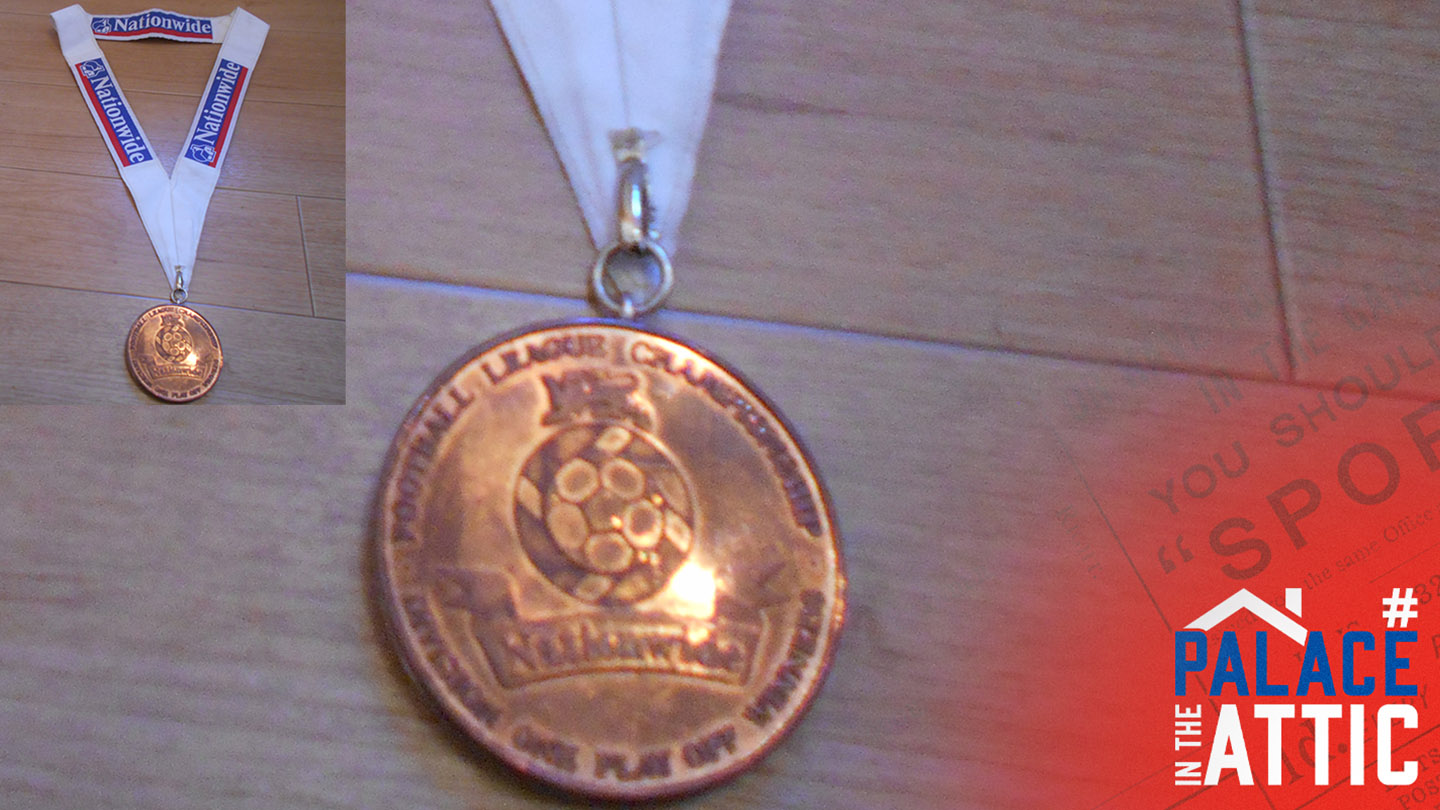 In 2004, Wembley was being rebuilt, all major finals were played at the Millennium Stadium, Cardiff, and Palace were on an unstoppable run to the Premier League.

Iain Dowie was the managerial hero, as he took Palace on a meteoric rise from the bottom three of the Championship on Boxing Day, to sixth place at the end of the season.

Palace squeezed past Sunderland on penalties at the Stadium of Light in the semi-final, to set-up a meeting with West Ham in the final. Palace held their nerve and won the final in front of their jubilant fans on one of the greatest days for the club! 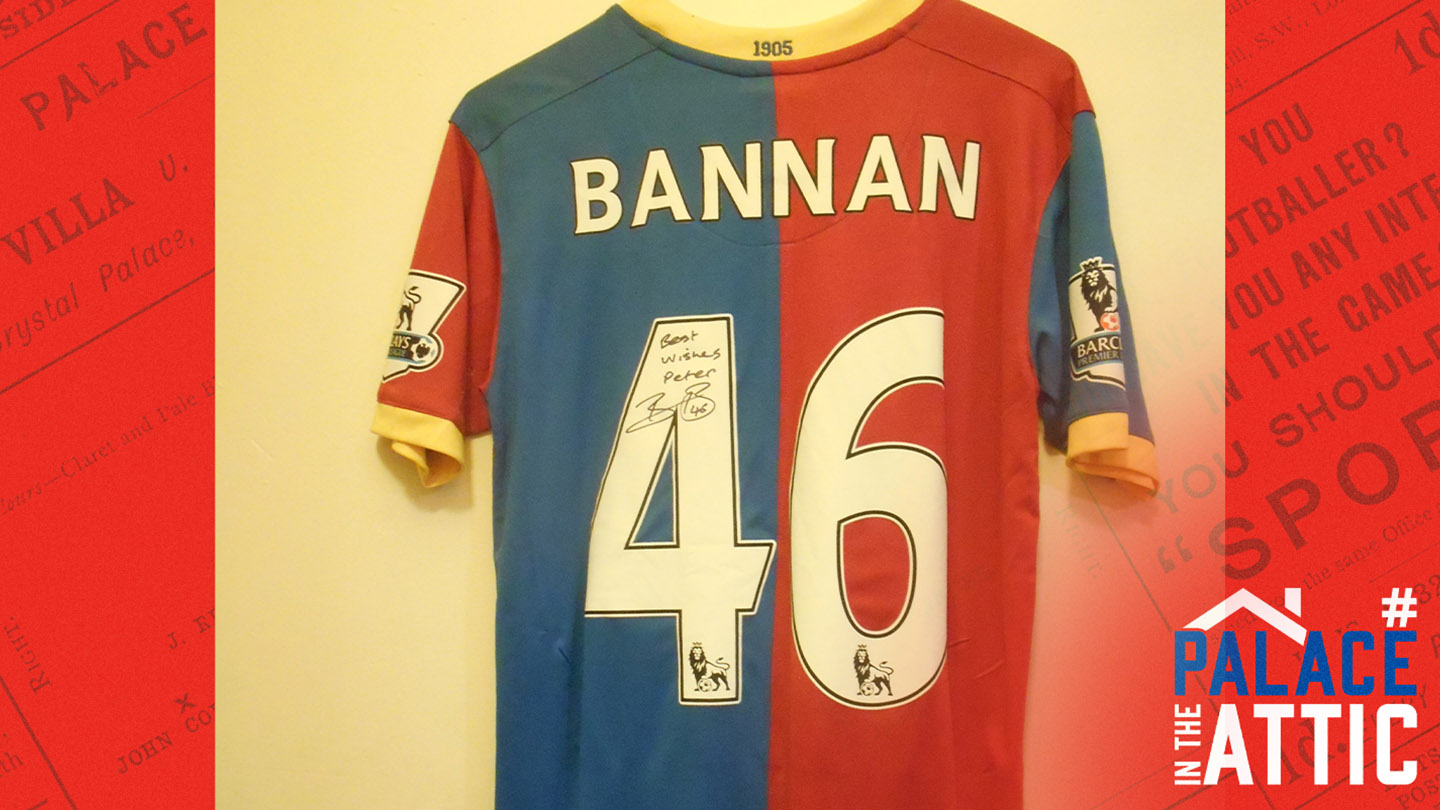 In the history of Crystal Palace there have been many legendary and heroic player, therefore, perhaps it is unusual that for my last choice I haven't chosen a shirt worn by Attilio Lombardo, Ian Wright, Geoff Thomas or Gareth Southgate, all of whose I own.

Instead I have chosen one worn by Barry Bannan, a player we signed following promotion to the Premier League in 2013. He only made 22 appearances for Palace and scored one goal before being sold to Sheffield Wednesday in 2015, where he is already a fan favourite having captained them to a Wembley play-off final.

So why Barry Bannan? Well, on 23rd November 2013, Palace were bottom of the league table, six points off safety. Manager Ian Holloway had chosen to leave the club and Palace faced Hull City away from home and it was fast getting to the point where we needed a win, any type of win at any cost.

The game was not pretty - to be honest both teams looked nervous and with 12 minutes to go Yannick Bolasie was sent-off. Down to 10 men, most teams would have sat deep and settled for a point.

All 5 ft 6 in of him somehow got onto a ball and he slotted home for a late winning goal. 1-0 to caretaker Keith Millen's Palace - the great escape was on!

At the end of the game, Barry came over to the front of the 900 strong away section and handed my then-four-year-old son his shirt, which was really special.

Apart from the shirt meaning so much to my son, it still means so much to me as well. To me there is also a symbolism - in a small way it stands for everything Crystal Palace stands for: the little man, the underdog and (a man down) fighting and winning against the odds!