Patrick Vieira has said Crystal Palace must remain compact in their FA Cup semi-final against Chelsea, but must also play proactive football on the front foot.

Palace lost 1-0 against Chelsea last time out in a very even game. Vieira looked at the Wembley clash on Sunday and stressed that his side must remain structured without shackling their offensive ability.

"We can express ourselves and be compact at the same time. It will be about managing those good or bad periods as a team. To get the result we want we will have to be well-coordinated and play a team game.

"It will be really important for us to play well as a team regarding what we want to achieve, if we want to stay deeper or go higher. But we will have to be compact one way or the other to not allow them to play around, because when they have the possession they are good.

At his disposal is a squad mixing youthful verve with experience, with the likes of Michael Olise, Tyrick Mitchell and Marc Guéhi having lined-up alongside James McArthur, Joel Ward and Cheikhou Kouyaté this season.

Among Palace's ranks are players like Ward, McArthur and Wilfried Zaha who have competed at Wembley before, with McArthur even having won the FA Cup with Wigan in 2013. 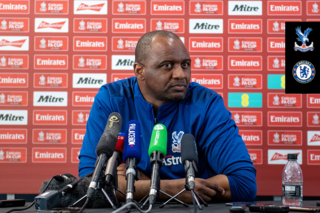 Vieira said he will rely upon his senior players to nurture the younger ones, but that he has no concerns with how they'll handle the occasion.

"They [senior players] will have a massive role to play because they’ve been there and know how to manage this kind of excitement," he said.

"Those players who’ve played semi-finals or won the cup will have a responsibility to look at those young players around about how they conduct themselves.

"What I’m really pleased about with the squad is the role and responsibility of every one of them. There is a good spirit around and I’m really glad because we are where we are because those experienced players take responsibility to guide those young players.

"There is a really good mix between those young and experienced players and everybody understands where they are and that what is important is the team performance.

"This is what they want. This is what they aim for. This is just the beginning for them, I hope. When you are a football player you want to be in this situation, this is what those players want, to reach the level of these kind of competitions. They will be up for it and I don’t have any doubt of it."

Finally, in his own playing days Vieira won the FA Cup five times, firstly when beating Newcastle United with Arsenal in 1997/98.

Having moved to England less than two years before, Vieira says this was the moment he realised the FA Cup's significance:

"It is a special competition and I really loved that day against Newcastle. I loved the atmosphere, the celebration after. This is when I realised the competition means a lot to the English people and even the players in this country.

"Because the way we’re celebrating and looking at the English players, the way they were celebrating, this is when I realised how important it is, this cup. Coming from Italy, the Italian cup [Coppa Italia] is less important for the players than the FA Cup can be for British players.

"The happiness, the excitement and the expressions, just to look at them. [Ian] Wrighty, he was just crazy about winning the cup and this is when you are a foreign player, you look at him and say: ‘This is big.’ It made it exciting.

"I will love us to play with a lot of enthusiasm, to be free in our mind and to really enjoy that moment."