Few players can be credited with securing a league championship after just 18 matches. Fewer still can be a reason for relegation after none at all. But Paul Stewart, Palace’s star loanee of 1993/94, will always be that player.

As 1993 moved into ‘94, Crystal Palace were flying high in the First Division - on course for at least promotion to the Premier League, and possibly topping the entire table.

Their young, homegrown squad was led by a former youth team coach - Alan Smith - and had the energy and ambition to push for an immediate return to the country’s top flight.

But at the dawn of the new year, they still faced some doubt. The Eagles had lost seven of 25 league games up until 24th January, 1994. Smith knew he needed an experienced, level head to settle the team and help hold their nerve through to winning the league.

Paul Stewart was “languishing in the Reserves at Liverpool” when Palace got in touch. He was a former England international, had broken several transfer records and had scored in a victorious FA Cup final. The Liverpool Reserves was far below his grade.

“Liverpool were probably trying to offload me, in truth,” he recalls over 25 years later.

“I had the opportunity to come down to Palace on loan. I knew Steve Harrison, who was first-team coach under Alan Smith, the boss… he’d been a friend for a long time.

“Palace never said they were going to get me permanently - they wanted to see how the three months went. I was hoping it would go well and maybe Palace would make an offer for me. They were feeling me out and I was looking to hopefully impress them enough to get a contract.” 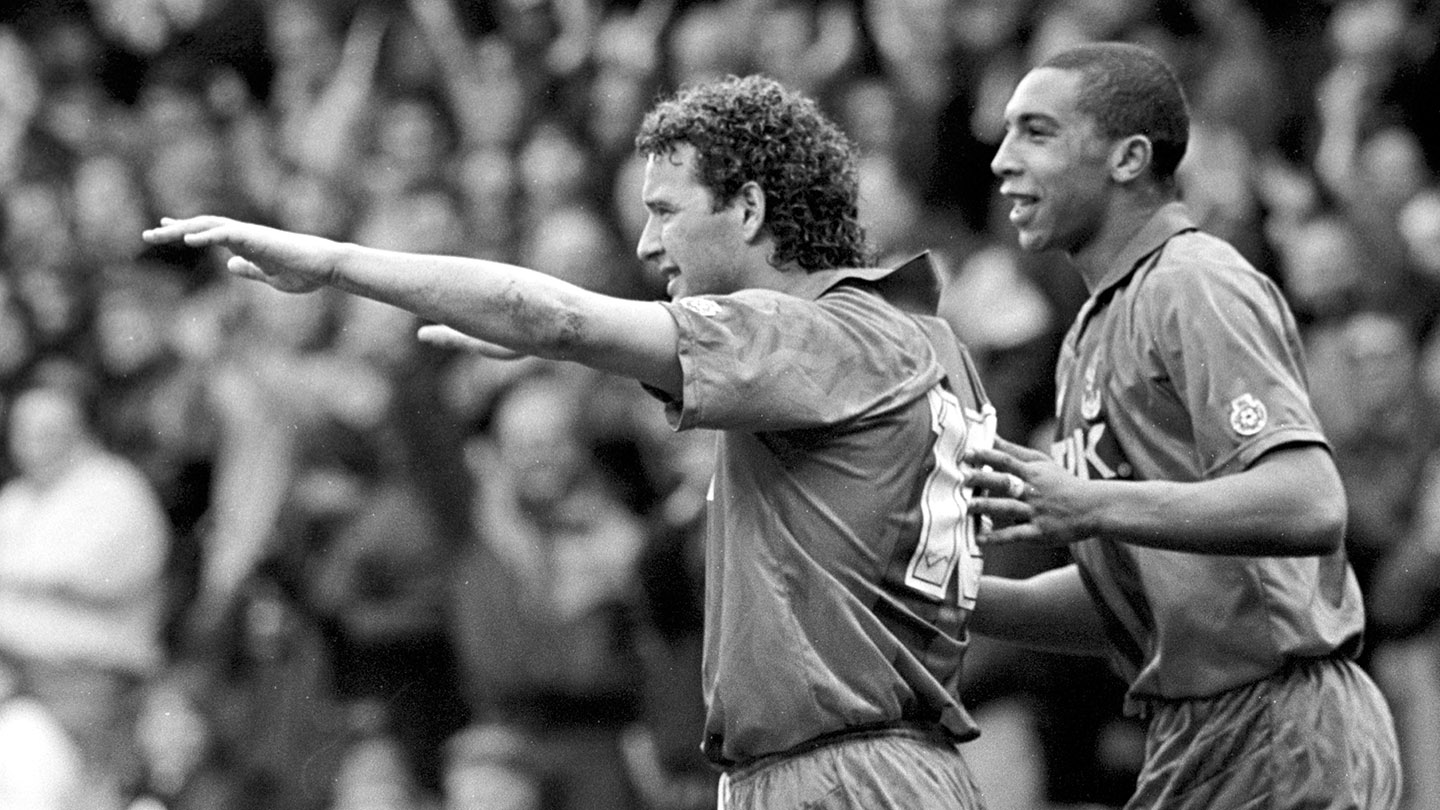 Stewart was a highly regarded professional, with experience at Blackpool, Manchester City, Tottenham Hotspur and Liverpool. He was approaching 30 and injury began to affect his game, but Palace provided a unique opportunity for the talented frontman.

“I went and stayed with Alan before I went into a hotel. I liked him straight away. He was straight with me, that was one thing. I trusted him, which I think is a major thing.

“We had a glass of wine, talked about football, his philosophy. He said he thought he had an excellent bunch of young players that were just short of that experienced head and he would like me to bring that to the party.

“Alan wasn’t a manager that got flustered very easily; he was very laid back but also very knowledgeable. I think he put a good team together in terms of his backroom staff: Steve Harrison, David Kemp.

Stewart was sold - “I didn’t have to think twice,” he says - and from his signing onwards, Palace lost just three of 21 league matches.

“Straight away, I felt I got on with them [the other players]. I wasn’t shy when I went into the changing room. I would speak my mind whenever I thought it was right, but tried to be respectful.

“You had players like Chris Armstrong, Chris Coleman, Gareth Southgate, John Salako. These were quality players in their own right, but also as a team. Gareth was an accomplished player even then, at the tender age of 23/24. And he was captain. Then, of course, you had ‘Cookie’ [a nickname inspired by a certain tattoo], Chris Coleman, who was again accomplished.

“I was just that final piece. When you needed to dig a result out or get players playing, I was able to offer that to the youngsters. It kept them on track when sometimes things went against them. It’s always easy getting to the top of the division but staying there is a different matter.”

One of the keys to Palace’s success in ‘93/94 was, of course, Chris Armstrong’s incredible form. Bagging a league-topping 23 goals, Armstrong enjoyed one of the best seasons in his career. With Stewart holding seven years more experience alongside him, Armstrong was able to flourish even further and maintain his free-scoring heroics.

“That was one of my qualities: when somebody knocked the ball up, I could make it stick and I’d also take more than one defender. I’d make them mark and concentrate on me, giving Chris more space to do what he did best, which was goalscoring.”

Of course, Stewart and Armstrong helped guide the Eagles to win the division with a game to spare, and the Liverpool loanee had returned to his best.

“I’d done what Palace had got me in to do, particularly the gaffer, and I was content that I’d proved to myself I was still good enough to do a job. I was then hoping something would happen in the summer that would take me there full time.

“I got on with everyone at the club; I’d really enjoyed playing with the players. We’d come back to the top division and I’d helped them do that - it would be a really, really good move for me considering I wasn’t playing at Liverpool. I fully expected to be going down there and to play for Palace the next season.”

But, much to his disappointment, things didn’t turn out as Stewart expected.

“We never even got to discuss it. For him to turn it down on the basis we never even got a discussion in place was disappointing. It was a bit of a kick in the teeth, if I’m honest… I was devastated when it never happened and I think Alan was disappointed that his Chairman would allow the deal to fall through.

“Alan’s often said: ‘If we’d got you and I could have done the deal, we would have stayed up in the top division.’”

Stewart was knocked upon his return to Liverpool but, following loans with Wolverhampton Wanderers and Burnley, worked his way back to the top flight with Sunderland. “It worked out,” he says gladly.

After retiring in 2000, Stewart could look back on a career as one of the finest Englishmen in his position from that decade.

And, nestled amongst it all, 18 crucial games for Crystal Palace still stand out.

“I loved it. I loved every minute of it. I wish the deal could have been done and I could have played under Alan Smith, because I found him to be not just a decent coach but an honourable man, and there are not that many in the game.

“I’d have got to play alongside some future stars and had even more involvement in the development of them as a senior player. I like to think I did a little bit and showed them the right paths and the right ways to go whilst I was there, but it would have been nice to join permanently and been a part of bringing the players through, seeing them develop and seeing them have the careers they had.

“I’d just like to say it was a pleasure to play for Crystal Palace Football Club.”

READ NEXT: Top of the Football League: Palace icons on winning Division One in 1994 at 'Boro