“I’d not watched it back until I caught up with the re-run on Palace TV,” Shaun Derry reveals that the 10th anniversary of Hillsborough 2010 was the first time he had relived that era-defining match.

And you can be certain that our current Under-23s manager will be tuning into to Palace TV again, today, for the live watchalong of the 2004 play-off final against West Ham; another huge moment for the Eagles that Derry played in every second of.

That day, Derry would line-up in the Millennium Stadium on the left-side of midfield, a position he’d never played before but a role he was very willing to carry out: “I was just delighted to be pulling on the shirt,” he says.

“When Iain Dowie came in towards the end of December as manager we were 19th, and Iain obviously needed to find a new formula that was better than the one before,” Derry begins to detail what would ultimately be a frustrating season for him but one that would end perfectly for the team.

“Aki Riihilahti and I both played similar positions but Iain wanted one particular player to be in the holding midfield position,” Derry explains. “Therefore, I did find myself on the bench for about 60% of the remainder of that season.”

Losing out to one of Palace’s finest midfielders of the 21st Century is understandable. And that battle between Derry and Riihilahti was just one of several going on throughout the squad:

“The competition for places all across the team was fierce because Iain had come in with a new training methodology and our results were incredible.”

Derry, having been a used substitute in the first and second legs against Sunderland in the semi-final, was handed a starting berth in Wales after Julian Gray had been sent-off in the second leg against the Black Cats.

“I got pulled to one side three days before the final,” Derry recalls. “Iain informed me that he wanted me to fill in on the left-side of midfield but explained how he wanted me to play narrow.

“We played with two narrow banks of four and I think that’s why he picked me because, defensively, I’d be reliable. He could’ve picked a more out-and-out winger like Tommy Black but Iain had a game plan.”

Heading into the game against the Hammers, the teams had one win a piece in the Championship head-to-head for that season. However, Palace’s victory over Alan Pardew’s side had come just the month before.

But Derry admits “Palace were underdogs for the final and we were throughout the season. No one saw us coming up the league table and we slipped in the through the back door.

“Even when you consider the difference in our preparations: West Ham flew to Cardiff a few days before. Whereas we took our normal bus on that long journey.

“I remember we wore our away kits and mine was ripped around the collar and the kit man had sewn it up.

“But that was Palace and that’s what helped us reach the Premier League. We approached the game as we approached any other match in the season.” 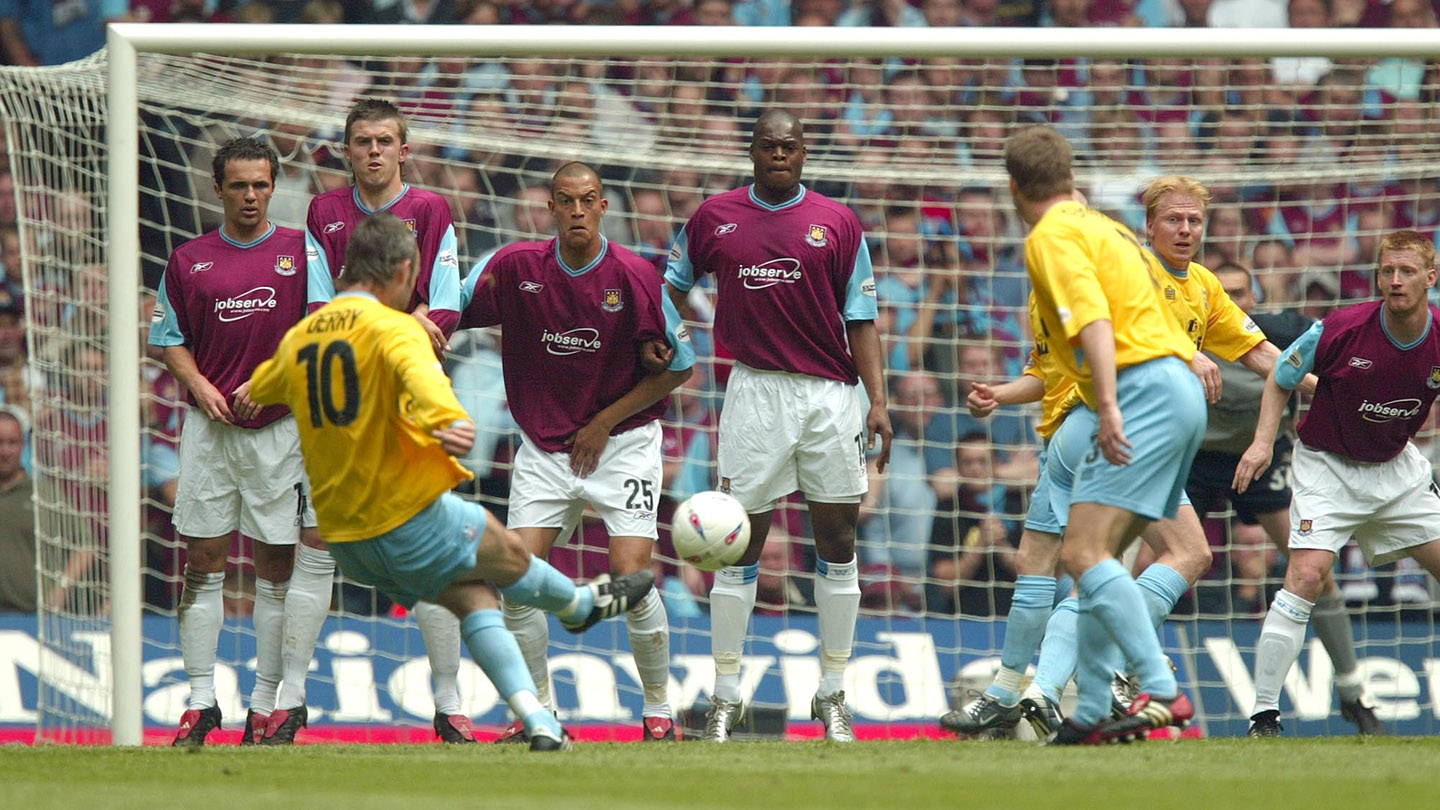 If you’re yet to witness Palace’s performance in the sun in Cardiff on May 29th, 2004, then you can certainly envisage it: hearts on sleeves, hardworking and resolute for the whole 90 minutes.

And Derry is the first to admit it probably wasn’t one for the neutral: “When you look at standout performances, I don’t think you tend to get too many top-drawer finals nowadays; they’re all tense.

“With the way that our group of players were, and the fact that the game plan changed due to Gray being unavailable, meant things were always going to be different.

“When you lose the outlet of having him [Gray] and Wayne Routledge on both wings, crossing into the box as we had done for the previous 26 games or so, you have to readjust – and that meant that we needed to just make sure we were in the game constantly.

“And we were,” Derry proclaims. “We never really got broken down by West Ham; I never felt under pressure.

“I knew that as soon as we got a foothold on the game it was only going to be a moment of individual brilliance and it never felt like West Ham were going to have the capabilities to do that to us on that particular day.”

Palace had the capabilities, though, and it wasn’t through the expected source of Andy Johnson, who had 28 league goals in the 2003/04 campaign – although AJ played his part.

“It was a stereotypical big man, small man combination goal but it was the other way round,” Derry recalls. “Everyone would’ve expected it to be AJ to finish it off and Shipps [Neil Shipperley] to have been the one to lay it on a plate.”

The referee’s whistle went 29 minutes later: Palace’s unexpected return to the Promised Land, for one season at least, was confirmed. 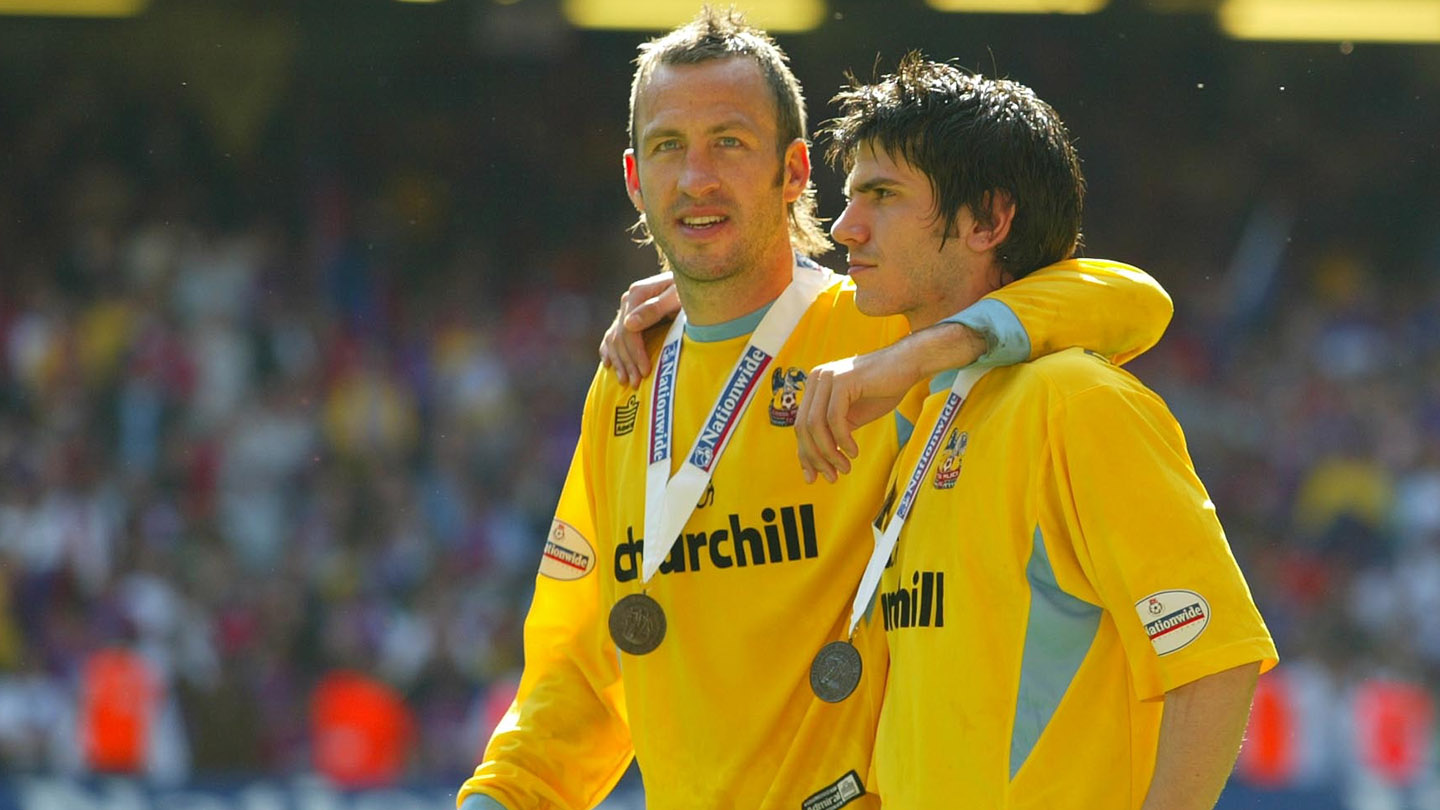 But if everything on the pitch was planned and the players well-drilled, off of it no one was ready to celebrate.

“They were absolutely bizarre,” Derry starts to remember the post-match celebrations. “Because we hadn’t planned anything in particular, as we weren’t wanting to look any further than just the 90 minutes ahead.

“We went back to our hotel, with no party arranged, and just ended up hiring a local DJ from the Cardiff area – you know the type: from a TV sitcom, it was something like out of Phoenix Nights with a party in the basement.”

But as tends to be the case with impromptu nights out: “It was brilliant.

“I remember one of the lads being in the DJ booth after we’d paid the DJ to leave his equipment behind for us. He took control and led the party.”

Glad All Over on the pitch and the dancefloor.