There were some stunning strikes across Crystal Palace’s men’s, women’s and youth sides in March, and you can vote for your favourite as Goal of the Month now!

Jairo Riedewald got the month off to a special start, controlling a difficult ball from a corner and firing beneath a sea of bodies to send Palace to the FA Cup quarter-finals.

There were some crackers at youth level too, Fionn Mooney pulling off a clever free-kick under the wall to help the Under-18s to victory over Leicester City. 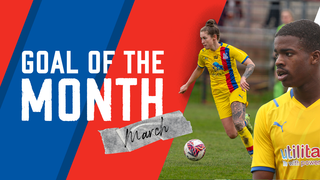 Victor Akinwale took matters into his own hands against West Brom, cutting inside and smashing into the bottom corner to score yet another in a prolific season, while Nya Kirby's scorching effort into the top corner was a highlight for the Under-23s side.

Finally, Coral-Jade Haines fired the Women's side to victory over Charlton Athletic with a thunderous strike from distance, nestling perfectly in the top corner with the 'keeper given no chance.

Pick your favourite goal from the five contenders and vote for Palace's Goal of the Month in the poll!