The FA Cup celebrates its 150th anniversary this year, having first started in 1871/72. Only one of its original clubs remains in professional football today, with Crystal Palace having been integral to the Football Association and FA Cup’s creation.

Fittingly, as the club celebrates the 160th anniversary of its founding in 1861, Palace have again reached the FA Cup semi-final; as they did in 1872.

One-hundred-and-fifty years on from that very first cup run, historian and author Peter Manning, who proved the club’s links to the 19th century team, explains our role in knockout tournament history.

Supporters who have followed Palace’s history at their spiritual home, the Crystal Palace, will know they were one of the most important clubs of the time. They helped to found the FA in 1863 and took an active part in its management in the difficult early years.

Football in those days was an entirely amateur game and there were no football leagues, just local friendlies. In an attempt to broaden football’s appeal in July 1871, the dynamic FA secretary, Charles Alcock, proposed at an FA committee meeting that a “Challenge Cup should be established in connection with the Association.” This would become the world’s first national knockout cup competition now known as the FA Cup.

Alcock, who lived in West Dulwich and occasionally played for Crystal Palace, was a good friend of Palace captain Douglas Allport, who was a member of the FA committee. Allport was directly involved in the FA Cup’s founding, having been at the July 1871 meeting that approved it. That October he then proposed the establishment of a sub-committee to create the cup’s rules. 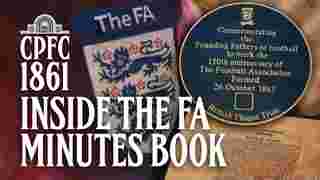 He would almost certainly have been at the meeting four weeks later which approved the new rules and made the draw for the first round of the inaugural FA Cup. It is not known how the draw was made; it was almost certainly not with numbered balls from a velvet bag, but more likely to have been on slips of paper, maybe drawn out of a hat.

Crystal Palace were drawn in the third tie and were to play a team they had never played before: Hitchin.

Fifteen clubs entered the first competition (the odd team out, Hampstead Heathens, were given a bye) and Palace were one of four matches played on Saturday, 11th November. We know with certainty when three of these games kicked-off: the press reported that two began after three o’clock, that Palace v Hitchin was three o’clock and Civil Service v Barnes had no reported kick-off time.

In drizzling rain Palace battled out a 0-0 draw at Hitchin, the only drawn game of the day and the first ever drawn cup tie. Under the rules at the time both clubs resultantly went through to the second-round.

Palace’s second-round tie was at home to Maidenhead on the notoriously muddy Crystal Palace pitch which “was not at all in a good state for football, being very heavy from the recent thaw.” Maidenhead held firm for an hour but with three goals in 20 minutes Palace ran out easy winners and qualified for the quarter-final.

Palace drew the Wanderers next for a match on Clapham Common on January 20th, 1872. Charles Alcock captained Wanderers, the leading club of the day, but Palace fielded a very strong side themselves that included two future England internationals, Frederick Chappell and Cuthbert Ottaway.

The press reported that the Wanderers had the better play but were held back by excellent goalkeeping from Palace’s Alex Morten, and the match ended 0-0.

It was decided a replay wasn’t necessary at an FA meeting, because the Scottish team, Queens Park, had reached the semi-final without playing a match. Through happenstance, they were given a bye in every round. Both Palace and the Wanderers went through into the hat with Queens Park and the Royal Engineers, the other semi-finalists.

At the same FA meeting, a sub-committee of Alcock, Palace’s Allport and Alfred Stair of Upton Park was set up to choose and purchase the first FA Cup trophy

Crystal Palace drew the Royal Engineers for their semi-final. Their match, the first FA Cup semi-final in history, took place on February 17th, 1872 (the other semi-final was on March 5th) at the Kennington Oval. Palace were again able to field their strongest side, including Chappell and Ottaway, but they were up against very fit military men who had not lost a game all season.

Palace gave the Sappers a good game, however, with Ottaway and England international Charles Chenery creating chances up-front and the defence holding out at the back. At full-time the score was 0-0, so the match would have to be replayed!

Palace looked sluggish in the replay at the Oval, playing against the young soldiers and without Ottaway. The Engineers employed very different tactics this time around, playing a very physical game, targeting Palace’s goalkeeper, Morten, who was “severely mauled” several times.

Palace were unable to stem the tide this time and the fitter Royal Engineers cruised to a 3-0 win to dash Palace’s hopes of appearing in the first FA Cup final.

Palace’s adventure in the first FA Cup was over but along the way the club, and particularly its captain, Allport, had been involved in many milestone moments in that first competition. Here we are, 150 years on, with Crystal Palace in the semi-final again.

Those early Palace players will no doubt join the team in spirit on April 17th to see if today’s outfit can go one better than they did and reach the final. Maybe they could even score another Palace ‘first’ and this time lift the cup…