Former Crystal Palace striker Glenn Murray recently announced that he has retired from football aged 37, bringing an end to an almost 20-year career.

Murray, who played 125 games for the Eagles and scored 47 goals after signing from Brighton & Hove Albion in 2011, sat down with the club to reflect on his time in south London and discuss his post-retirement plans.

The decision to retire was a straightforward one for Murray, as he explains: “I just sat down with my family and felt as though the time was right. The last two years haven’t been particularly good ones, especially without fans as well - that’s added into the mix.

“I turn 38 in September. Though my body’s still in good nick, so to speak, it was starting to hurt a little bit and I thought it was just to get out while everything was still intact.”

Remaining "in good nick" is quite a feat for Murray now, and retirement at 37 in the second-tier is a rare achievement even in the modern game. Perhaps more remarkably though, the forward managed over seven years' playing having recovered from an ACL (anterior cruciate ligament) injury which kept him out for 10 months while at Selhurst Park.

He crossed the border and became a Palace hero ❤️💙

“I think obviously that goes down to a lot of the work at the club, [from physio] Matt Roberts. I had good physios around me to help me rehabilitate my knee.

"I had a lot of question marks over my career at that point - would I be the same player? Would I lose any more pace? Those were the questions in my mind, but I think I probably came back a better player and that is thanks to the help that Crystal Palace gave me around that time."

On his time at Palace, Murray is nostalgic and fond of what he achieved in red and blue, despite setbacks along the way: “The first year [at Palace] I found it really difficult. After that, the following three or four years [were good], even though I had an ACL injury in there, which was probably the lowest point of my career.

“All I can remember from Palace are good times and just great people, the fans, players, managers. I just thoroughly enjoyed my time at the club.”

The 2012/13 season in particular is considered Murray's finest season by the man himself and Palace fans alike, as he netted 30 goals in 42 league games to help Palace’s promotion to the Premier League via the play-offs.

“The whole season, the atmosphere, the group, it was just an amazing season. Once in a lifetime for me, a 30-goal season for a striker - I don’t think they come around very often unless you’re the very, very best.

“For me it was really magical on that part, but also the group that I did it with and the achievement we made together. I think that the good foundation that we gave the club going forward were and that group that were about then.

“I think my job was made much easier by having Wilfried [Zaha] and Yannick [Bolasie] on the other side who created a lot of opportunities for me. I think that they made me look good, to be fair to them, but it was just such an enjoyable time to play there.

“I suppose the club were off the back of some bad times - through administration and things - and was a little lost and maybe a little bit neglected. Then, to be part of that group, at sort of the beginning of what Crystal Palace has grown become now, has such a place in my memory and my career.” 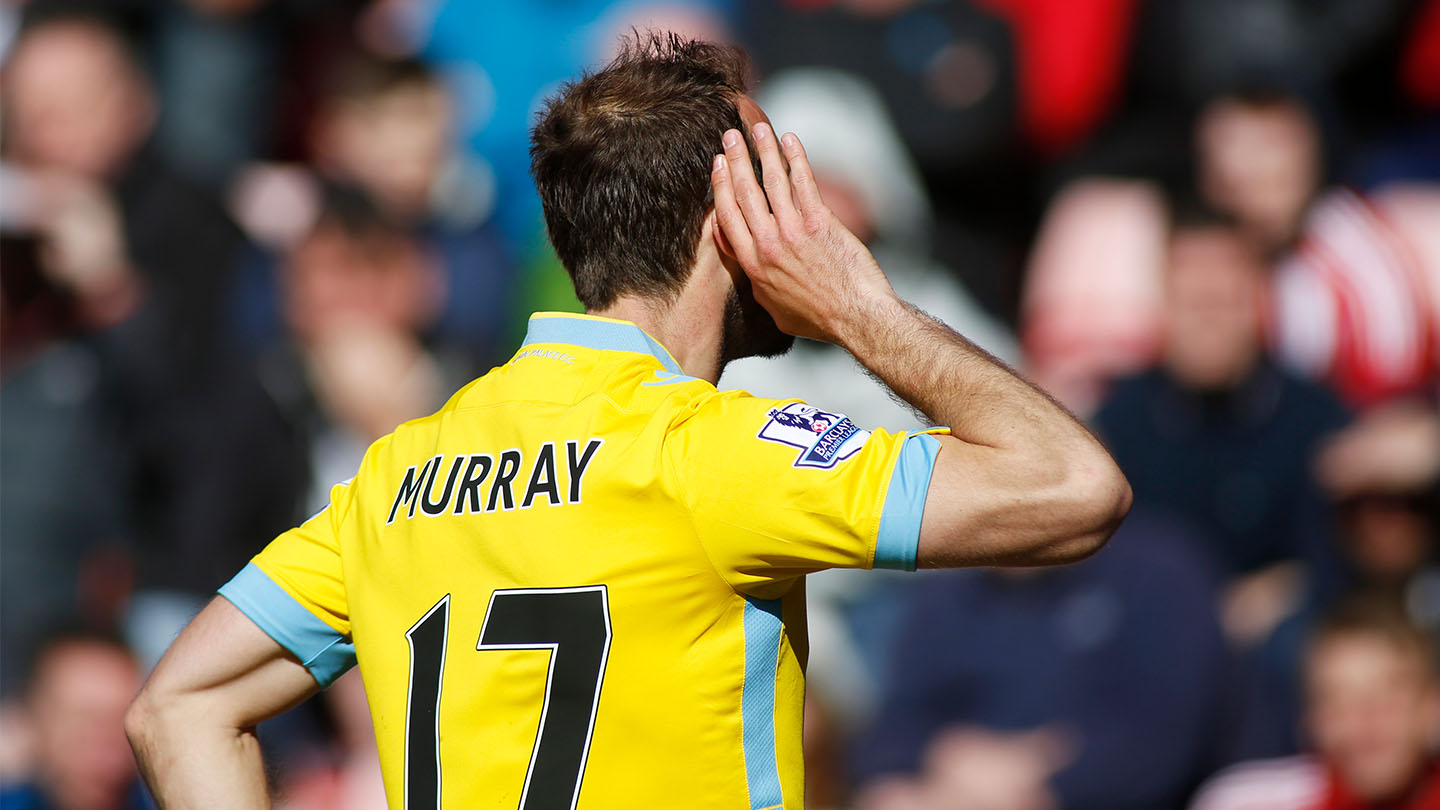 Murray likens the promotion squad to a ‘bunch of misfits, with a point to prove’ though this ultimately worked in their favour, as he explains: “I think we have a great connection with the fans, just because, thinking back to that 12/13 season, we were probably a bunch of ‘misfits,’ I suppose, with a point to prove.

“We were all from working class backgrounds and I think we represented that local community of Crystal Palace really well.

“We had Mile [Jedinak] and KG [Kagisho Dikgacoi], two rocks behind me. Mile’s a good friend and he went on to have a good career both internationally and personally. Peter Ramage, who I’m still in touch with, Damien Delaney at the heart of the defence, Jules [Speroni]. Honestly, just everyone. That was the real special thing about my time at the club, it was the group more than anything.”

Murray's ACL injury occured in the first-leg of the play-off semi-final against his former club and Palace rivals Brighton, as he fell while turning on the ball. Though he came from a rival club, the frontman never experienced the rivalry itself until he was in a Palace shirt.

“Pre-going back to the Amex [in 2011], that evening where we won 3-1, even though I spent three and a half years at Brighton, I didn’t really know the extent of the rivalry.

"It had been mentioned in passing, but I’d never came across Crystal Palace as a Brighton player. To return four to five weeks after signing for Crystal Palace I soon found out the extent of the rivalry and obviously I found it out again once I returned to Brighton for a second time."

Palace eventually overcame Brighton thanks to two goals from Zaha in the second-leg of the play-off semi-final and they also surpassed Watford in the play-off final to secure promotion to the Premier League.

Murray had to miss the majority of the 2013/14 season due to the injury, but that didn’t stop him from coming back stronger. 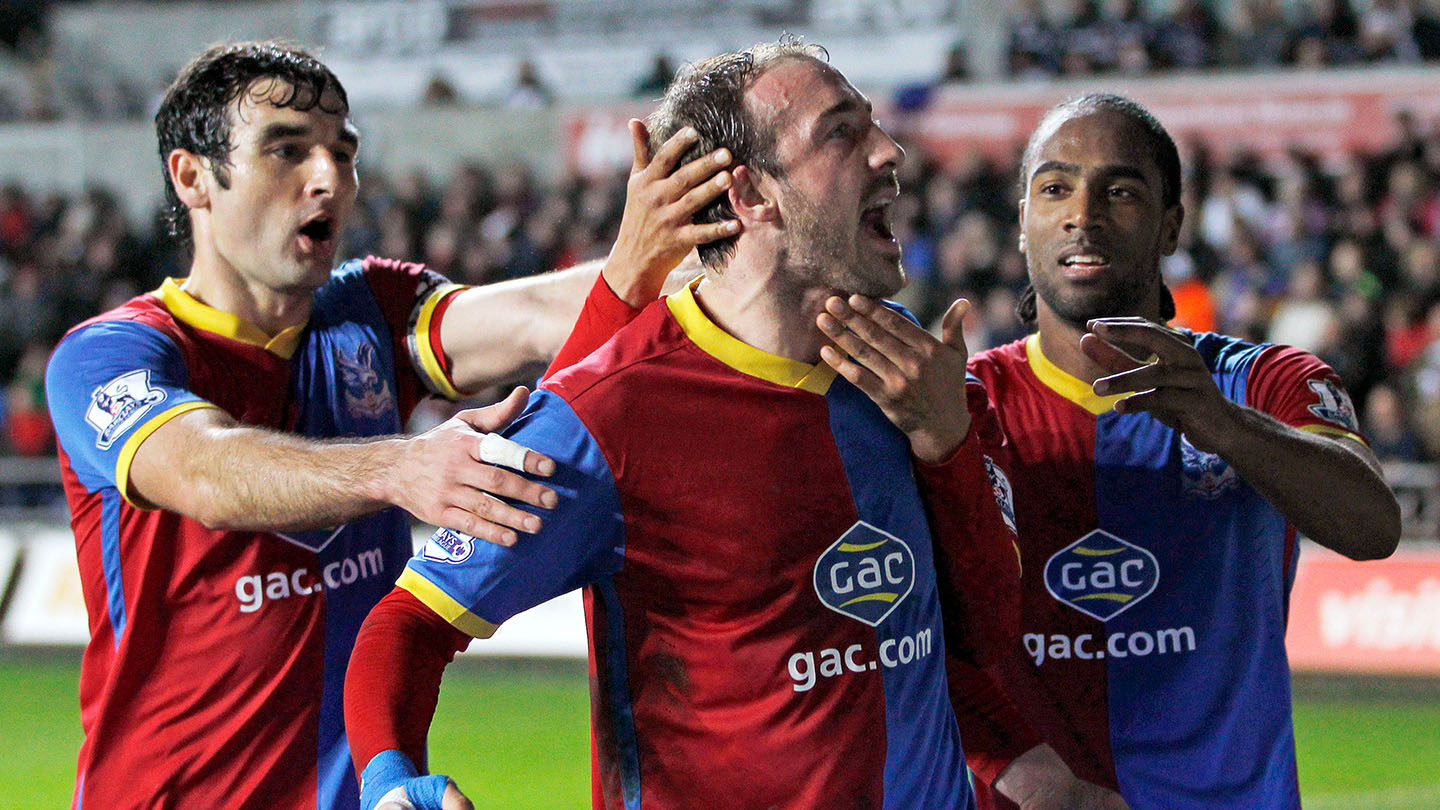 "People think that the injury is probably the ultimate low point of my career, and it probably was at that moment, but looking back in hindsight it was the best thing that ever happened to me, because it changed my ways as a professional footballer. I think, from that injury, the changes I made around that time have led me on to have a longer prolonged career."

Murray made his comeback in arguably one of the toughest matchups he could’ve asked for: “I hadn’t had a reserve game or anything and Tony Pulis decided to put me in against Manchester United - against Rio Ferdinand and Nemanja Vidic! It was some welcome to the Premier League and it was a tough test.”

“Once I was at Palace and I was doing quite well in the Championship, sort of halfway through that promotion season I did think to myself that if I never got promoted with the team into the Premier League then no one would come out and buy me because I wasn’t a 'fashionable forward,' I would say.

“I knew that the only way to get there was to get promoted and luckily we managed to achieve that together.”

Promotion to the Premier League was the culmination of three turbulent years at Crystal Palace, from 2010 to 2013. You can find out more in the new docuseries When Eagles Dare, which Murray features heavily in.

The trailer has landed.

"It’s nice to sit back and relive those moments, because as a footballer you never really stop," he said, when asked about When Eagles Dare.

“One season finishes, you have a few weeks off, then another season starts and you never have time to reflect. That [documentary] has given me time to reflect on that season, that group of players. It’s nice to sit down and take it all in and sort of almost relive it a little bit.”

Finally, his features in When Eagles Dare may be the start of a brand new career for Murray, as he reveals his intention to go into the media after his retirement.

"I suppose it’s a strange situation to be in for a 37, nearly 38-year-old to be finishing one career and starting another, but it’s an exciting time and it’s an opportunity to do something else with your life, so it’s a stage of my life that I’m looking forward to - doing something new."

Best of luck, Muzza. And thanks for everything.

READ NEXT: Ambrose opens up on mental health strains in football