Coppell: How Italian meals and a bar in Cheam helped Palace win at Wembley

Crystal Palace's most successful season is most widely accepted as 1990/91: the campaign they finished third and won their first major tropy, the Full Members' Cup.

Thirty-one years from lifting the title, then-manager Steve Coppell reflects on one of the highest and lowest times in Palace history as the club again hurtles towards Wembley stadium.

This interview was originally published in the Palace v Chelsea programme in April 2021. It is republished in full below. Get your hands on Palace programmes here.

When Steve Coppell entered the Kenilworth Road dugout for Crystal Palace’s league opener against Luton Town in August, 1990, he had one simple goal: to improve on the season before.

For a man who transformed the club from cash-strapped Division Two survivors to FA Cup finalists, the intention was simple and modest. Even Coppell regarded the upcoming months conservatively, by his own admission “optimistically looking forward to the new season without having great expectations.”

As the Eagles took a single point from Bedfordshire, few could have imagined a significantly improved campaign should Coppell’s prediction prove true.

“We had the mentality to a certain extent which was a little bit non-league - something to prove,” Coppell says today. “We all appreciated we weren’t a bad side, which is not a bad starting point.”

That starting point swiftly developed when Palace opened their campaign with a 10-match unbeaten run, moving to the top spots almost instantly and staying there stubbornly. (The club would sit third from December 16th onwards – not dropping or climbing a single place throughout 22 rounds.)

Two defeats in their opening 20 games made Palace one of the league’s most competitive outfits and an 8-0 victory over Southend United in the League Cup set out their stall: the Eagles were there to fight.

“We were really fit and wanted to play at a tempo not many teams could handle,” Coppell says.

“When you’ve got a strike partnership of [Ian] Wright and [Mark] Bright, people loading the bullets like [Eddie] McGoldrick and [John] Salako, when you’ve got a real solid back four of Eric Young, Andy Thorn organising, two really good full-backs and a top, top quality goalkeeper – an awful lot of good things can happen. And they did that year.

“The one thing I remember about that season more than anything was we didn’t make many changes… We had [a squad of] 17, 18 or 19. It wasn’t as if you could make wholesale changes, and the players wanted to play rather than run up and down Farthing Downs [then the club’s rudimentary fitness routine].

“We all appreciated we weren’t a bad side, which is not a bad starting point.”

“I think it was very much a rolling stone. The way we played at that time was almost clockwork; we had a style of play which was direct, I’d be the first to say that.

“We had a mentality… We trained on Saturday mornings before games. Things like that just don’t happen anymore. We went to a lovely Italian restaurant for the pre-match meal after we trained; we drove from the ground to the restaurant in Thornton Heath and then drove back.

“It seems like a lifetime ago, but it worked for us. We got into a routine with all these games where we just felt we could beat anybody.”

Coppell calls winning “a lovely habit to have” and explains that his gritty squad, gleaned from the cut turf of lower league football, regarded each and every game as a chance to sustain their momentum. That included the Full Members’ – or Zenith Data Systems – Cup, a tournament devised partially by Chairman Ron Noades for clubs in the top two flights.

Thirty-nine teams took part in 90/91 with a Wembley clash at stake – but the competition’s significance was open to debate then as it is now. For Coppell, none of that mattered. There were matches to win.

“I wasn’t bothered what competition we played in because we wanted to win the game, whoever we played against, whenever.

“It wasn’t a question of: ‘Let’s target this because it’s a route to Wembley.’ I think everyone was aware that it’s the ZDS, it’s not the FA Cup, but let’s just go in trying to win the games.

“When you’re winning you enjoy playing and you enjoy winning. You want to keep it going – you don’t want to fall off a cliff in a game which might be perceived as lesser.”

With that mindset the Eagles dispatched Bristol Rovers, Brighton & Hove Albion, Luton and, over two legs, Norwich City. The rolling stone was going to Wembley.

“We knew Everton under Howard Kendall were an entity,” Coppell says of his second final in two years – facing the Toffees on April 7th, 1991. “They had real good players – a very, very capable team. I would say they would have expected to win.

“Similarly, for us to return to Wembley - although it wasn’t obviously the big game - was a chance to put things right and it was possibly very close to the team that should have played the year before, with Bright and Wright up front. He [Wright] was a cat on a hot tin roof at the best of times, but he felt this was very much his chance to prove himself to everybody… Going in to it was almost redemption.”

The Wembley turf still vividly bore markings from an American football game the night before and the final itself was a dogged affair, with both sides collecting cards and, in Martin Keown’s case, a broken nose. 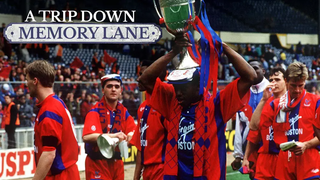 Coppell recalls: “If you’d have said to our players ‘you’re playing extra time,’ they’d have said: ‘Well, it doesn’t matter. We’re fitter than everyone else.’ It was the mentality we had.

“I would have hopefully confidently spoken about our full repertoire of scoring goals and given them confidence to maintain the way we played. We didn’t really have a Plan B, I’d be the first to admit that.

“We played our way. We had a Plan A and our Plan B was to play Plan A better. We didn’t defer to: ‘Well, we’ve tried this way of playing so now we’ll knock it around and keep possession forever.’ No. We wanted to score goals.”

Eventually, Saturday morning sessions and tackling Farthing Downs guided Palace through a dominant 30 minutes: Wright bagging either side of a Salako header.

Trophy secured, history made, Palace reacted as only Palace could: “After that final,” Coppell remembers, “we hadn’t planned a celebration or banquet dinner or anything like that. I seem to remember meeting up with quite a few of the players at a bar in Cheam just to have a few beers. And that was somehow typical of the team.

We played our way. We had a Plan A and our Plan B was to play Plan A better.

“It wasn’t: ‘We’ve won a final at Wembley, we should go to the Royal Garden and have a sit-down banquet.’ I think even later that night, after a couple of beers with the players in Cheam, we went back to Ron’s and he was having an open house with players coming in and out. To a certain extent, it was amateur hour after winning a cup final at Wembley!”

On his way up the Wembley steps to lift the trophy, Coppell quietly told Noades: ‘This is the first of many.’ That night in Cheam, the pair could be forgiven for thinking their relentless work in the late ‘80s had finally paid off and transformed Palace into one of England’s highest flyers.

After all, with second-placed Liverpool banned from European competitions for a third year, the third-placed south Londoners were just weeks away from continental qualification themselves.

Such a feat would likely glue a much-lauded team together and bring the club the funds required for sustained top-flight success. The reality was far harsher. Liverpool’s ban was lifted early, and Palace were excluded from the UEFA Cup they had once seemed guaranteed.

Coppell’s voice drops to an almost sombre tone as conversation turns to the decision. Always considered, the former manager starts picking his words audibly: “Ron was working hard to get it to break our way, but there was too much hurt from what had happened previously.

“We knew Ian Wright was like a ticking timebomb. We knew he would be sought after, 100%. I certainly felt at the end of that season that we’d finished third in the league, won a trophy at Wembley, had a great season - he’ll want to stay here and fulfil his ambition with us. I felt that was realistic.

“That summer, after we were denied Europe, people had obviously been speaking to Ian and he made it known to me - very, very genuinely, it wasn’t sneaky – he said: ‘I feel as if I’ve got to go to really achieve my ambitions.’ That was the sad thing, not just for me – for everybody. One man doesn’t make a team, but he made a hell of a difference.

“At the time it was almost as if: ‘Right, if he goes, we’ll get somebody else. We’ll find another one.’ But you don’t find another one. You don’t find someone who’s going to get you 20-odd goals a year. You aspire to, you work your socks off, you go up and down those motorways and you try. But the attitude of other players changed because of that.”

“All players grew with us and grew together,” Coppell says. “Then all of a sudden we were put in this situation where we had to sign like for like replacements… Looking back, we couldn’t predict – because we’d never been through this before - the way the future was going to go.”

Palace were eventually relegated in 1992/93 and Coppell resigned shortly after. The struggle those seasons posed make the club’s earlier success even starker. But they didn’t begin to diminish its impact.

“I remember sitting with [then-first-team coach] Ian Branfoot after games and he’d say: ‘Can you believe this? They can’t handle us. They can’t deal with us.’

“I speak with Ian today and he says to me: ‘That was the best year ever.’ It was his happiest time from a coach’s perspective and, from a manager’s, I must admit it was a lovely warm feeling… We were very conscious of making history for Crystal Palace.”