Conor Gallagher’s season continues to get better. After joining Crystal Palace on loan last summer, the midfielder scooped consecutive Player of the Month awards, earned his England debut and now, in February, has been named Young Player of the Year at the London Football Awards.

Gallagher receives the accolade having made 27 appearances for Palace, scoring 8 goals and earning 5 assists. The stats alone are a remarkable step forward from last season at West Bromwich Albion, when Gallagher bagged two goals and two assists from 32 outings.

The confidence propelling these advances is clear on the pitch, too, with the 22-year-old bagging several eye-catching efforts and routinely putting in Man of the Match performances.

Speaking for cpfc.co.uk as recipient of Young Player of the Year, Gallagher sought to explain what’s helped him this season.

“I’ve got to give a lot of credit to Crystal Palace,” he said. “They’ve given me the confidence and platform to show people what I can do the best way possible. I’ve got to thank them for that, because I don’t think this would be possible without being able to do that here.

“I feel like the gaffer [Patrick Vieira] knows how to get the best out of me. He knew how he wants me to play and the best way I can show what I can do. He told me this at the start of the season and has given me confidence throughout the season by playing me as much as he has and having trust in me and talking to me, so I’m really thankful to him. 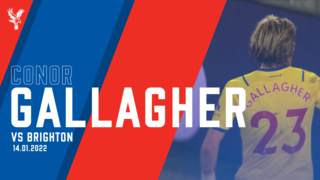 “He’s helped me so much so far this season and I feel like receiving this award as well, he’s a big part of it. He’s been amazing to work under and I’m hoping to learn even more from him until the end of the season.

“The people here, players and staff, the manager, they’ve all helped me with that and helped me play the best I can. I feel like that’s a big factor.”

A little too modest to pick out individual highs from the campaign, Gallagher routinely focuses on the team’s performance when asked to comment on how he’s fared so far.

He suggests it’s been positive with room to improve, saying: “Of course there have been ups and downs but I feel like as a team we’ve played some good football and showed that we can compete against the top teams in the league, or the world, you could say.

“That’s very encouraging to the fans and to us here as well. I feel like we need to improve our consistency and game management in quite a few games this season because we should have more points than we do. But I think overall so far it’s been a really good season for me and the club.

“I’m proud of what I’ve done so far... I take each game as it comes and I try to improve each game and to help the team as much as I can. If that’s scoring goals, or making assists and chances, or tackles in our own half, then that’s what it is. I’m just hoping I can carry on playing well and finish the season as strongly as possible.”

Gallagher does pick out one particular positive, however: his swift and strong relationship with Palace’s supporters. Often seen celebrating together following the No.23’s goals, he says: “There’s been quite a few really high moments so far this season, which is incredible to look back on. In a few years’ time they’ll be amazing memories.

“Some moments I shared with the fans, after scoring certain goals. That’s something I’ll always remember, and I’ve always said it: there’s no better feeling than scoring in front of your fans.

“The fans have been just incredible this season. The support they’ve shown me, the whole team and the club has been amazing. They’ve liked the way we play.

“Even though we should be higher in the table and they know we can win more games they’ve stuck by us and still had confidence in us each game, so we’ve got to give them a lot of credit for that. The support every single game, home or away, is unreal – so thank you to them.”