Crystal Palace manager Patrick Vieira revealed what makes Will Hughes such a flexible player in his team, and provided insight into the midfielder's drive to improve.

Reflecting on Hughes' start to life in south London, Vieira said: "He took a couple of weeks to get into training because the last couple of weeks at Watford he didn’t play as many games.

"He got back physically and got to a good place and needed time to understand his role and responsibilities on the field. Now I’m really happy with him in the team." 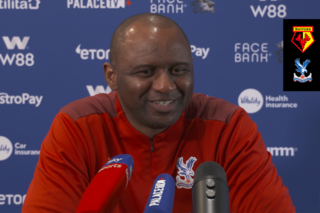 Going into more detail on how he fields Hughes and what he's like away from matchdays, Vieira said: "It’s always about what you want and expect from him. He can be part of the buildup because of his vision and technical ability to make the ball move from one side [of the pitch] to the other.

"He can play higher up the field because he’s smart enough to play between the lines. I allow myself to use him in both situations when needed.

"We always like to give feedback about the games and he is one of the players who likes to come and review his game and have feedback.

"It’s interesting talking with him because he wants to improve, know what he can take from the next game and what he can improve. These are really interesting players to work with."

Finally, Vieira turned his attention to the Watford game more widely, saying: "It’s an important game, there’s no doubt about it. But again we know every game has its challenges and every game is important. We never take anything for granted and are not putting [specific] emphasis about where we are in the table.

"We know where we are, what we want to achieve. We need to perform for 95 minutes and when you look at the game against Chelsea and when we conceded, this is what we need to focus more on: the details. The way we play is positive but we need a little bit more to turn those performances into a draw or win."