New signing Luke Plange has spoken of his delight at joining Crystal Palace, and has given fans a preview of what to expect when he takes to the field at Selhurst Park.

“I’m very excited to be joining a big Premier League club,” he told Palace TV in his first interview since putting pen to paper. “I’m ready to crack on. 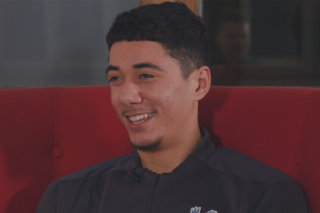 “Obviously I’ll be with Derby fighting for them in the Championship, but I will be ready to go back to Crystal Palace in the summer and get ready to go.

“When I heard I was very excited about the news. I know Palace are a big club, a big Premier League club. I knew that it was a very good chance for me to take and to progress in my career.”

Still developing at the tender age of 19, Plange explained his style of play and his most important inspirations – including his current manager.

“Ronaldo or Thierry Henry [were my idols]. They were just world class. I’ve been watching them for a long time: clips or old games. They were really powerful, skilful and scored loads of goals as well.

“[Wayne Rooney] was a world class striker for many years – for decades. The amount of goals he scored, you really can’t knock him because he was doing it for years and years and years.

“I’m taking tips and he’s helping me grow as a striker, and all the things he’s telling me I’m just trying to implement into my game and improve as a striker as well.”

Rooney gave Plange his debut just three months ago, with the young man scoring on his first start for the club.

“Obviously the difference between youth level and the first-team is [it is] more physically demanding,” he explained. “But I think I’ve adapted well. I have to keep adapting to improve as a player and help the team as much as possible.

“I was ecstatic [to score on my full debut]. It was a very good moment for me and my family. The chance came and I took it. My first debut was good, getting into the groove of the team, and then my first start for Derby I just tried to work as hard as possible and then when the chance came I just took it."

Plange will remain with Derby for the remainder of the season, as they look to secure a remarkable survival in the Championship.

“I was always going to fight for Derby until the end of the season due to the current situation,” he said. “It’s a tough situation that they don’t deserve to be in. I’m going to be there doing all I can do, putting in my all for the team, and hopefully see out this season as well as possible.

“When I looked at the situation and the opportunity, I knew there was an opportunity for me [to develop], and it’s also helping Derby in the process. It’s a very good one to take.”

After progressing through the Arsenal Academy as a youngster, Plange is excited to play under Patrick Vieira, as well as linking up with some former teammates when he gets started.

“He [Vieira] is such a big name for Arsenal as well, and part of the Invincible team,” he said. “That’s a big figure to be playing underneath as well.

“I know a couple [of the squad] like Michael [Olise] and Jes [Rak-Sakyi] as well. I used to play against them a lot. I’m just looking forward to meeting the rest of them at the end of the season.

“There’s a lot of young players playing [for Palace] in the Premier League, such as Michael Olise and [Eberechi] Eze.

“I’m just really looking forward to doing the same thing: trying to get into the team and push as much as possible, doing what I’m doing in the Championship and working as hard as possible to get to that point.”

Plange finished with a message to the Crystal Palace fans: “I’m very excited to be joining Palace, and I’m just ready to crack on in the new season as soon as it starts.”