Jean-Philippe Mateta says watching French legends like Patrick Vieira as a youngster made him want to move to the Premier League, as he discussed his biggest influences in the game.

“I loved football because my father used to be a footballer,” Mateta explained. “I watched matches with him on TV all the time.

“That’s why I loved football, and I had friends who I played football with all the time. I was playing football and it became a regular thing.

“I was totally addicted to football.”

However it was the influence of his countrymen that sparked a fascination with the English game. 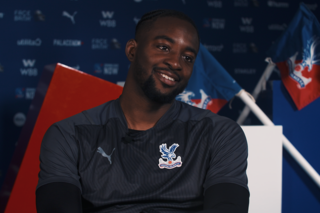 “I thought about playing in the Premier League, because I saw the likes of Thierry Henry on TV, Emmanuel Petit and Patrick Vieira, who were all hugely successful here.

“This encourages other French players to come over here and show what they’re made of.”

In his particular position, Mateta had a different idol – a European superstar still at the top of the game today.

“As a striker, I mostly started watching other strikers play at first,” he says. “Particularly because I’m tall, I used to watch and learn a lot from Zlatan Ibrahimović.”

His first goal for the club was certainly something out of the skilful Swede’s playbook, pirouetting to backheel in the opener at the Amex last season.

Now, having made his move to south London permanent, he wants to continue learning from Vieira in the Premier League.

“He has spoken to me about playing with more aggression, which I have already been doing,” Mateta reveals. “He has also talked about his desire to win. That’s what he’s taught me.

“By doing so, you then take this desire to win into games. That’s also reflected on the pitch with the intensity we play at, which we can thank the coach for, as well as the training exercises he makes us do day in day out.”

After goals against Norwich and Millwall in recent games, Mateta hopes he can push on in the remainder of the season.

“It’s a dream come true,” he says. “When I was little, I was always one of those players who dreamt of playing in the Premier League.

“Now that I’m here, I’m living my dream. I just want to show everyone what I can do now.

“As I will most likely start to get more minutes under my belt, I hope to score even more goals and to continue celebrating with the fans."