The Crystal Palace supporters dubbing Jean-Philippe Mateta a cult hero after his season-and-a-half in SE25 are adding the forward to an illustrious list: Saša Ćurčić, Fan Zhiyi, Aki Riihilahti, the whole of the 2009/10 squad included.

Mateta’s seven goals since signing in January 2021 have begun to write his name into club history, with a few of those efforts coming in key games. Two, of course, ensured Palace beat Brighton and Millwall respectively – adding affirmation to cult hero status.

But there’s more to it than just stats and performances. Mateta also has the popularity, the fan relationship, the turnaround in form and, now, the chant.

Before we get into those, our No.14 wants to share a message with supporters.

“Can I ask something to the fans?” he says mid-interview. “When I hit the corner flag I want them to say 'BOOM!'"

Moving on, we sat down with JP to delve into his newly forming cult hero status, covering a few of the key topics that qualify him for such a title.

Here are his views on each.

“I’m popular here?” Mateta starts off by asking modestly, before reflecting on two memorable moments. He says he doesn't see much of the social media praise.

On the Brighton backheel: “I think: ‘I need to score.’ When I saw the ball I thought: ‘I need to do everything to put this ball in the goal.’ I had the defender on my side, and was thinking if I should control the ball or not. I was thinking I needed to shoot in one touch and looked at the ball. I’m prepared for the backheel.

“In training and matches [I’ve scored similar.] With my team in France as well I scored like this. 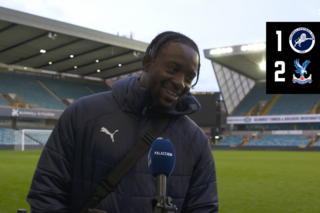 “[The Brighton rivalry is] important, I know. Brighton, I didn’t know because it was like the first game I started. It was on the coach they told me: ‘You know it’s a big game?’ I said: ‘Yeah, yeah. It’s big rivals. But Brighton’s not in London?’ They explained to me and the pressure came for the day of the game.

“When the game has too much pressure, me I like it. I like to play with pressure. I think I play better – I like when it’s pressure and I don’t know – I’m strange, I like this.”

On the Millwall cup winner: “The feeling was good because for me Millwall, the atmosphere was hard. It was a tough game, they scored first. It was hard and when I scored the goal I thought for me it was délivrance, as we say in France. [Which translates as deliverance or liberation.]

“Before this it was a long time I didn’t play and then I scored; my confidence came back and it was important for us and for the fans as well. I kicked the corner flag and was so happy.”

Cue the seamless segue: “When I was young I looked at the matches and videos on YouTube. For me it’s important to have your proper celebration. One day I looked at one game and saw a guy kick the corner flag.

“I was thinking: ‘I’m not sure,’ but I think it was Ibrahimović. He kicked the corner flag one time and I thought I would do it. Before I was only looking at Zlatan Ibrahimović, he was my guy every day [to watch].

“Before I broke the corner flag. When I was young I broke it and now I know where to kick to not break it.”

Keep an eye on the height JP reaches, and you’ll know why next time.

“It’s good,” Mateta says of the fans’ take on Vengaboys’ Boom, Boom, Boom, Boom!!. “I know it’s an old[er] song. When they made the change [substitution against Arsenal] I heard it – it’s nice.

“It’s good. I like to be connected. I’m a striker, I like to celebrate with the fans.”

Mateta played seven games and scored one goal in his first year. Since signing a permanent contract in January this year, he has already bagged four from 15 appearances (several of which were as substitutes).

“Every week I have more confidence,” he says. “It’s my first [full] season... Now it’s coming and I keep working and match after match the gaffer has confidence in me. I like this and want to give him good answers. He asks me to do something and I need to give him a good answer.

“I think this season we have young players and the tactical, the way we play is changing. I think it’s better, for me and the team.”

Mateta gets up to leave, then adds a post-script: