Jeffrey Schlupp: I feel as good as ever physically

Jeffrey Schlupp says he hopes there is "plenty more to come" at Crystal Palace, after revealing that staying fully fit was a major target given to him by Patrick Vieira this season.

“One of the most important things for me personally was to stay fit all season,” he said before Palace’s trip to Goodison Park. “Previous seasons I’ve had spurts here and there where I’ve played well and then I’ve been out of the team with long injuries. 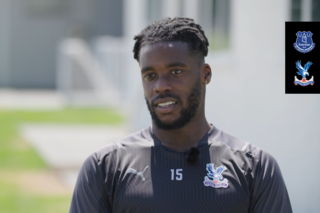 “I feel amazing. I’ve had a great season physically. I’ve stayed fit for most of the season. I feel as good as I have done for my whole career, so I'm sure there is plenty more to come.”

It’s an example of Vieira’s strong relationship with the players, and Schlupp says he admires how quickly the manager got to grips with the squad.

“He’s definitely got to understand everyone personally,” the versatile midfielder explains. “He understood everyone’s strengths and weaknesses to work on. I think that’s the sign of a good manager.

“You’ve got to understand your players really quickly in such a short space of time. It’s his first year. He’ll only get more and more understanding of the players and unlock more from the boys.

“It’s a mentality shift. I’m sure everyone goes into every game trying to win it, but I think teams are really starting to not like playing against us. Coming to Selhurst Park, especially with the backing that the crowd gives us, is unbelievable.

“We definitely don’t want to make it a nice place to come, so I think we’ve done that and scared some opposition coming to us.”

With a tough trip to Everton ahead, Schlupp and co. are keen to maintain their high performance levels in the final two games of the season.

“They’re going to be looking at that game as a must-win,” he says. “I’ve been in that situation before. It’s a big build-up and a big occasion for them.

“But it’s another game for us that we want to go and win. We’ve got out objective: we want to finish as high up in the table as possible.

“We’ve had a great season, but we want to finish where we think we deserve to finish to top it all off, so its another game we’re looking to win.

“A top 10 finish is something we’ve mentioned. We definitely feel it’s possible and with the season we’ve had it [would be] a great way to cap off.”