Crystal Palace deployed the uncommon tactic of having their centre-backs take goal-kicks against Brentford, with Joachim Andersen often standing over the ball and launching it deep into the Bees’ half.

Speaking with Palace TV post-match, the Danish defender explained that this was a tactical decision made after analysing the south-west Londoners’ style. 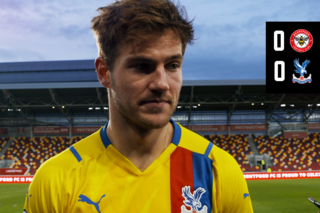 He said: “It was just because it was something we analysed, how they were pressing. I kick it quite far so we thought that’s where the space was because it was difficult to play out from the back when they press so high.

“I think we managed it well. Jordan [Ayew] got in some good situations and we managed to pick up the second balls so I think that was good.”

Looking at the game more widely, Andersen sought to explain the tactics Brentford used to make it such a close-fought game. He said the hosts were solid throughout, leading to the stalemate scoreline.

“They work so hard,” he said. “They pressed, they’re aggressive. They stood well defensively and defended the box well so it was difficult to find the holes, find the gaps and we didn’t manage it today.”

Finally, Andersen discussed what Palace have to do next to start turning strong performances and hard-fought draws into wins.

“It was a tough game, hard game, and a hard week. [I’m] disappointed really, to be honest. I thought against Norwich we should have won and today I have a little bit the same feeling. Again we didn’t create enough today. We should have been better in the last third of the pitch, but it was a solid performance defensively.

“We’ve been speaking about it this week: we need more runs between the lines, more movements, more bodies in the box. We didn’t really manage that today I think. Of course it’s difficult to get the whole picture of it right after the game but I don’t feel we had enough people in the box or did enough to create some chances.”