Joachim Andersen says he and Patrick Vieira share a similar outlook on the way football should be played, as he looked ahead to Palace’s meeting with Liverpool on Sunday.

“He’s a really good guy,” Andersen told Premier League Productions. “He’s a good manager with a lot of experience as a player. He knows the game, and the staff have been really good as well.

“The sessions are really hard actually. We train a lot and we train hard, but it’s really enjoyable playing under him and I really like the way he thinks.

“The way he sees football is similar to me, so that’s always a good start.”

As the season progresses, Andersen and his teammates have become more accustomed to Vieira’s specific instructions – some of which are simpler than others.

“We want to play out from the back, to press high, to come with a lot of energy,” he explains. “That’s also some of the things that are the same way I want to play football. That is what I got here, and those were the talks I had with Patrick before I came here. I think what he said to me has been true.

“Sometimes football is simple – it’s just about changing a few things. With the press: if we want to press high, we need to do it together. We need to understand each other’s movement. 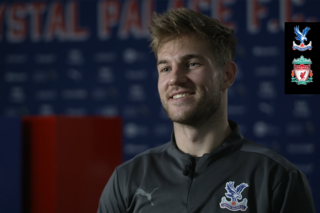 “If someone is closing a line on the right, the guy behind him has to push up on the guy who is in front of him. Each other’s movements we need to understand and that is what we are trying to learn.

“We’re getting better and better and that is some of the input he has been really good at trying to explain to the team. Some small things we had to change to play good football, to play attacking football and it is working well.”

Vieira’s attacking playing style has been warmly received by a young squad, many of whom arrived this summer, and Andersen thinks they can only improve.

“From every game, and the longer we come into the season, we get it more under our skin the way the gaffer wants us to play. We’re happy where we are but we can always do better. We’ve been unlucky with some results in the season where we could have won or got a point, but we can’t complain.

“The dressing room is really good. We have a good mix of experienced players and young players, and the guys have been fantastic to be honest. Everyone is nice and everyone has good relationships.

A new arrival this summer himself, Andersen also highlighted the contributions of Conor Gallagher and Odsonne Edouard since they joined him in south London.

“Odsonne has been fantastic,” he said. “He is playing a little bit on the left and in the centre, so he’s got that to his game as well. He can come from the left and go inside. His movement has been really good for me.

“Sometimes he wants the ball to his feet, and sometimes he goes in the centre so he makes it easier for me as a defender to play some good balls into him. Also it’s important that he’s making the right movement for the whole team to get higher up the pitch, to make options for the midfielders.

“Conor has been incredible. The work rate, the energy, the important goals he’s been scoring. He’s adding that to his game which is good.

“I knew him from West Brom last season when I played against him. He’s now adding goals to his game, and he’s been massive for us.

“His pressing is so important for us and his energy has been really good. I know he has a big future ahead of him.”

Ahead of Liverpool on Sunday, Andersen says a defeat last time out against Jürgen Klopp’s side did not reflect the performance, and should not discourage the Eagles this time out.

“I know Liverpool, I’ve played against them three times now in my career,” he explained. “I know how they play, I watched them sometimes on the television. I know what they’re about.

“The first game we played at Anfield against them this season, we played really good actually. We lost 3-0 from three corners, but we had so many chances. The result was not the right result, in my opinion.

“We have a good chance [this time], and we play at home with our fantastic fans, so we have a really good chance.”