Joel Ward was a crucial part of the Crystal Palace defence that conceded a record-low number of Premier League goals. 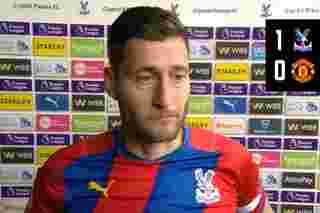 Reflecting on the achievement, Ward said: “I think we take that on as a whole unit, a whole team. Everyone plays their part and it’s not just down to the backline.

“We’re always striving to raise the bar and want to set our standards. The last five games at home keeping a clean sheet is massive and gives us momentum going into next season.”

Palace secured the feat by beating Manchester United 1-0 on the final day of the season. Ward commented: “I said before the game that we wanted to put things right from the other night and we did that today. It wasn’t probably our most convincing performance but we got the job done against a top team.”

Finally, Patrick Vieira left the field to huge applause in front of another sell-out crowd. He has steered the club to 12th in a season of change, and Ward says there’s more to come with the Frenchman at the helm:

“We know what he was as a player and the standards he set as a player. He sets those standards as a manager as well. It’s been a joy to work under him so far and I think the club is going in the right direction under his guidance.”