Michael Olise has won his first W88 Crystal Palace Player of the Month award after four sensational performances in January.

The summer signing featured in all of Palace's games last month, playing 291 minutes and scoring twice. 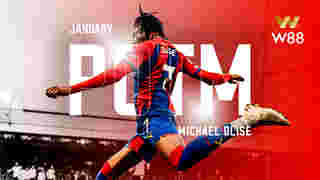 He scored in the 90th-minute against West Ham United and then against Millwall during a second-half display that relentlessly tested the Lions' backline. He also bagged assists in both games.

Olise's efforts saw him named Man of the Match against Millwall and Liverpool, and he scooped the Player of the Month accolade with an impressive 69.6% of votes.

Conor Gallagher and Odsonne Edouard came second and third, with 6.4% and 4.3% respectively.

Sharing a message for fans, Olise said with a smile: "I just want to thank the fans for voting for me - I appreciate it".

See a full breakdown of votes below!