Ferguson: You can see my passion - I'm so happy to be back

Nathan Ferguson could not hide his joy after completing 75 minutes with the Under-23s side against Chelsea at the Academy, telling Palace TV that he cannot wait to be back in a Palace shirt.

“I’m so thankful to have made it through,” he said after the game, his first lengthy return to action after a cameo appearance against Tottenham Hotspur on Boxing Day. “It was a very tough journey. I can only be grateful, I can only be pleased. You can see out there my passion – I’m so happy to be back.

“I’ll be honest, I was grateful, but I didn’t feel this happy about the Spurs one. I’m going to be honest, I didn’t. But here it felt like I played – I properly sweated in a Palace shirt, I’ve soaked it in! 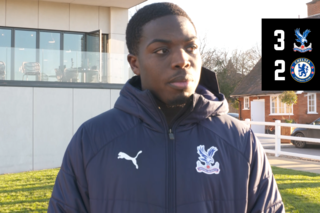 “I’m very happy for my family, because they’ve seen me so down that it’s been a rough time for them as well, and my friends. My teammates have actually been with me through the whole situation, even the ones that have moved on now.

“I can only say thank you.”

Alongside the usual spectators, Ferguson was watched by two of the most central people in his life: his mum, and manager Patrick Vieira.

“She was [here],” laughed Ferguson. “I used to get into scuffles at school so she wouldn’t be happy with my yellow card, I’m not going to lie! It was cheap.

“We live and we learn. We take things in our stride and we move on to the next game – I'm excited to play.

“[Vieira] just said: ‘Stop fighting!’ To be fair, he knows why. You won’t see me doing that in a first-team game, it was just a little moment.

“I could tell he was happy that I was back. It really brings a smile to my face because their happiness makes me happy.”

Ferguson was also pleased by the overwhelming response to his return to the side from Palace fans, having stayed off the radar during his time out with injury.

“I’m happy the fans are happy,” he said. “Shout-out to the fan who asked for a photo, because I've been going out and no one notices me!

“I walked past the Crystal Palace shop – no one noticed me. So shout-out to those guys who notice me, they ask for a photo.

“It shows that I’m still wanted and still appreciated. I can’t wait to be back."