Vieira: We are making progress but have to turn draws into wins

Patrick Vieira says he is pleased with the progress Crystal Palace have made since their opening day defeat to Chelsea, but that his side must turn draws into wins to climb up the Premier League table.

“When you look at the way we are playing, the number of chances we created [means] we should score more goals to give ourselves wins and more points,” the manager said in advance of Chelsea’s visit to south London for the return fixture this weekend.

“It’s the maturity we need to have as a team to manage those difficult periods in games a little bit better. We’re in a better place than a couple of months ago. 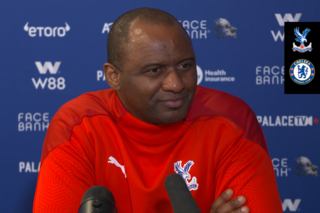 “Of course what is important today is to have good performances to allow ourselves to win football matches.”

Chelsea won the meeting at Stamford Bridge in August, but Vieira says Palace have greatly improved since then.

“There is no doubt we are a better team than when we played them,” he said. “We still have a lot to improve and learn.

“The players are feeling more comfortable, they are feeling better and automatically the team benefits from that. We learn from the mistakes the team makes. We are stronger as a team.

“There is a better understanding of what I want from the players, and I'm really looking forward to the game tomorrow.”

Chelsea arrive on the back of their Club World Cup victory, and are still competing on four fronts this season.

“We need to have all the ingredients to give them problems. We know that we are capable of doing it. We have to play with excitement because the fans and the stadium will be up for it.

“We have to be ready and we have to play well, because every type of mistake you can make, with the talent they have, you can get punished straight away.”