Patrick Vieira said spirits are high at Crystal Palace before the FA Cup quarter-final with Everton.

The Palace manager looked at both the long- and short-term mood of the club, saying it is positive after recent successes and more broadly, with ‘solid foundations’.

After going five games unbeaten and reaching a cup quarter-final, Vieira was asked to reflect on his start to life in south London. He said: “The first day [I arrived] I said this was the right club to implement the ideas I want to. I strongly believe the foundations of this football club are really solid.

“You have a Chairman [Steve Parish] who is a fan and a Sporting Director [Dougie Freedman] who played at the highest level and has good experience. We had a good idea about the type of player we wanted to bring to the football club. This year it’s been a success.” 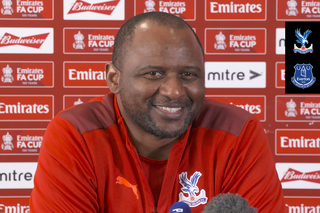 Discussing the current group, Vieira elaborated on a ‘positive vibe’ that has become apparent to those even outside the club.

“There is a positive vibe around the football club,” he said, “about the confidence the players and staff have at the moment. We know how challenging it is and how difficult it is to maintain performances or win games against Premier League teams.

“We try to be really consistent in our behaviour and mood. When things are going well we’re the same as when things are not going as well as we wanted. We keep working well, try to improve in training and have a clear idea about what to achieve on the pitch. The players, I’ve been really pleased with the attitude. The good period is with the way we’ve been working and the way the players are dedicated to football.”

Turning his attention to Everton, who Palace play on Sunday (20th), Vieira said: “There is no time to relax. This is a huge game for us and we want to do well, to go as far as we can. We are really close to the semi-final, with a home tie to give ourselves the best chance to go to the next round.

“It’s a really exciting game and it’s going to be exciting for Everton as well. They’re one game from Wembley and we know how difficult it’ll be, especially after the win they had yesterday [1-0 v Newcastle United]. We know how they are as a team and it will be difficult, but we’re ready for it.

“There’s a long way to go so for us the conversation is about how well we need to perform to give ourselves the best chance to get through… We’re going to play a strong team and want to go to the semi-final.”

Finally, the Palace manager explained his relationship with Frank Lampard, who he coached while with New York City.

Discussing the pair of players-turned-managers, Vieira said: “I played against Frank for a couple of years and worked with him at New York. I don’t want to say I know him well but we know each other.

“When he was playing at New York and I was coaching the team of course we spent a lot of time talking about football and how we see the game. Seeing him as a coach at Chelsea and Everton, he had a really good experience as manager.

“We had the same route: ex-players who want to do well at managing. We both know how difficult it is because he got the sack at Chelsea and I got the sack at Nice! Your name doesn’t matter. What matters is the result and the way the team plays.”