Vieira: First goal at Molineux will be crucial

“This is a team that don’t concede very much,” he said in his pre-match press conference. “When they score first they win their games, so we will have to be aware of that.

“When you look at the table, [Wolves] are fighting for European spots. We played them at home and had a really good game. This game will not be different: we will have to be at our best if we want to take something from there. 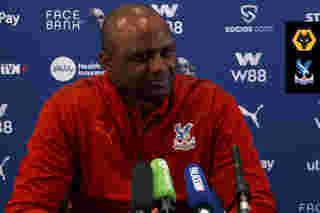 Sitting in 11th place in the table and with an FA Cup quarter-final against Everton to come, Vieira says he is pleased with the season so far but that there are still improvements to be made.

“We knew that it was going to be a challenging season because of the turnover that we had,” he said. “We had so many young players coming, especially from the Championship and they had to take time to adapt to the Premier League – but those players did fantastically well.

“We’re never satisfied because we always want more, this is the game. There is a lot more to come from this group of players, and we will see what will happen this season.

“We wanted to have a good run in the FA Cup and so far it’s been good, but there’s still the game against Everton and a long way to go. We’re really pleased with where we are, but there are massive games to play before the FA Cup.

“In the league there are massive games, and we need points – we need wins.