Vieira explains tactical approach and how semi-final can inspire squad

Patrick Vieira says tasting a semi-final at Wembley can encourage his Crystal Palace squad to push to get to cup finals in future, as he reacted to a tough semi-final defeat to Chelsea at Wembley.

“We work for it and we aim for it,” he said of future success. “Players smelling and tasting those kinds of games where we are really close to a final, those kinds of moments players want to play in more often. 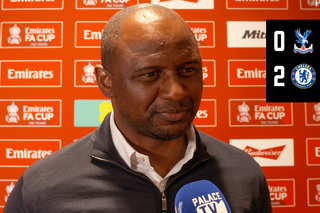 “You look at the fans today and they were excited for us, they supported us through the competition and in the league. There is an excitement around the football club. That’s why it’s important for us to build from that kind of platform we are putting in place at the minute.

Vieira changed his formation for the semi-final, with Cheikhou Kouyaté slotting into a three-man defence alongside Marc Guéhi and Joachim Andersen.

“It was just to match their front five, and not to give them that opportunity to run between our normal back four,” he explained. “At Selhurst, we suffered a lot from them creating overloads on the side, and so we changed to stop that.

“This is the quality of the team we faced today. Doing that creates other problems. In the first-half we were good, we frustrated them a lot and they didn’t create many situations.

“I’m really pleased by the tactical approach to the game, but when you don’t win it’s always frustrating.”

After a positive first-half showing, Palace were pegged back by Chelsea after the break.

“I don’t think it’s bad luck – we tried to play our best but Chelsea were too good on the day for us,” Vieira said. “We tried to frustrate them and we did in the first-half. We tried our best today and it wasn’t enough against a really good side.

“Big games like that, against those kinds of times, when you are in a good period you need to take chances. We didn’t score.

“But I'm proud of the team’s approach to the game. In the first-half we were brilliant, but we couldn’t score that goal.

“The way they moved the ball in the second-half, we ran quite a lot and we got frustrated. We started not putting so much pressure on the ball, and Jorginho got more time and it was really difficult for us because then he can make better decisions.

“This is a team that has won the Champions League, the FA Cup – they are on a different level to us. But I’m proud of the way we approached the game and the way we made it difficult for them.

“We have to build on those kinds of performances.”