Patrick Vieira says he was pleased with his side’s response to going a goal behind at St. James’ Park, but that their first-half performance let them down against Newcastle United.

“We gave them the momentum and the belief. We tried to play a bit more quickly in the second-half. We had possession but we didn’t manage to create many chances.” 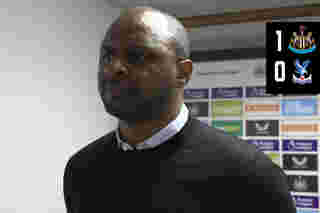 Vieira says his instructions at the break got the response he was looking for, but that the final spark to create the equaliser was still lacking.

“At half-time the message was to really understand what we wanted,” he explained. “Before talking about what we could improve tactically, it was important to compete.

“After that we can start to put our passing game in place, but that will not be enough if we are not competing in the first ball, the second ball or running in behind. I got the answer I wanted, but we didn’t score that goal and I was disappointed with the performance overall.

“JP [Mateta] and Macca [James McArthur] brought a little bit more energy to the team [when they came on]. We managed to play more going forwards, JP stretched the back four going in behind.

“We created some situations, but the final ball wasn’t the best at times and we struggled to create chances.”

After a physically and emotionally draining few days, Vieira says focus has now shifted to the next game.

“We have to look ahead to Leeds on Monday,” he said. “It’s been a challenging week. But this is a young team who will grow with experience.

“How to manage the disappointment of the semi-final into the next game at Newcastle. The result wasn’t what we wanted, but I believe as a team we will learn from those situations and that is good for the future.”