Vieira: Why Zaha’s performance was best this season

Patrick Vieira explained why he felt Wilfried Zaha’s performance in Crystal Palace’s 4-1 win over Watford was his best since the manager’s arrival. And it wasn’t his brace.

Zaha kept Watford alert from kick-off, and bagged a sensational pair of goals in the dying minutes to ensure Palace’s victory.

Speaking after the game, Vieira commended the Ivorian’s performance, saying: “People will talk about the two goals he scored and I think it was fantastic for the team, but what I loved about Wilfried today was his work ethic. 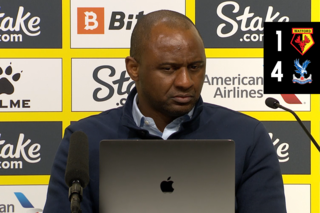 “The way he supported Tyrick [Mitchell], how he made it really difficult for Watford to build on their right-hand side. Out of possession it was I believe his best game since I’ve been here.

“I think he had a really complete game. From the start to the end he was really concentrated and focused on his defensive duty and that allowed him to score those goals. Scoring goals is something he’s been doing for years and years, but today I really loved his performance out of possession.”

Turning his attention to the wider evening, which saw one of Palace’s best collective displays of the season, Vieira was equally positive:

“I was really pleased with the team performance,” he said. “I think we played well from the first minute and managed to control the game in the second-half.

“I’m really pleased with the players because I think lately we’ve been creating chances, not scoring so many goals and not taking points where we should take points. Today I was really pleased for them because they deserved those three points.

“In games it’s about creating those chances and sometimes I think we created enough to score and didn’t take it. Today we took our chances, scored in a really important moment in the game and that built our confidence.

“When you play well it gives you confidence and today we played with a lot of confidence, which is good for the rest of the season.”