Vieira: Zaha has the personality to keep delivering

Patrick Vieira stressed that Crystal Palace winger Wilfried Zaha can continue to perform and provide more for the team, as the manager said the No.11 can utilise the team around him to his benefit. 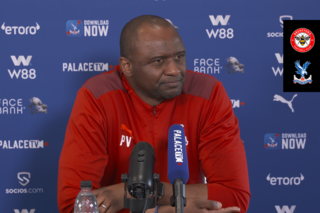 Looking back on the performance, Vieira said: “That was obviously a fantastic goal, a wonderful goal. This is Wilfried Zaha at his best. This is what we need, what we want from him.

“He has to score more because of his ability to do so. He’s a player I believe with his ability can create more and score more. It will not be him by himself; he needs the team around, the performance and the chances created to put him in a situation to express his talent.

“When I talk about him doing more it’s not about him as an individual – it’s about using the players around him, the way we play, the chances we create.”

Vieira was then asked if he feels Zaha is at his happiest currently, and whether, after his Norwich penalty went wide, he will continue on spot kicks. The manager answered in the affirmative for both.

“He’s under contract, so that means he is happy to wear the shirt and perform well around the team,” Vieira said. “What is good for him is to have players around him taking responsibility and that’s taken off some of the pressure on his shoulders.

“We have players who can score, players who can deliver and the positive is we’re having a team performance. That allows him to express himself and that’s good for him and the team.

“I think people always remember the last penalty. But when you look at his record on penalties it’s been really good, so there’s no reason we should change.”