Patrick Vieira commented on a range of players at his disposal in his pre-Norwich press conference on Tuesday, discussing the likes of debutant Tayo Adaramola, Wilfried Zaha and Michael Olise as he spoke about Palace’s squad depth.

The manager has options across the field and explained that, while he might have to leave big names on the bench at times, he prefers having too many choices than not enough.

Starting on 18-year-old Adaramola, who made his first-team debut against Hartlepool United, Vieira said he needs to ease Academy prospects into professional football, and test them steadily at the highest level. 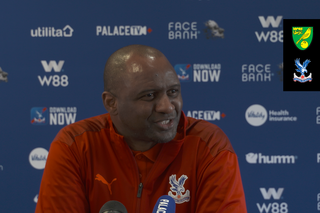 “It has to be something gradual,” he said. “He’s been training with the first-team quite often so I was pleased he came on and he did quite well [v Hartlepool].

“Those young players who have talent we need to create the pathway for them to show if they can cope with the Premier League. We have to give them those chances, then we will find out if they are good enough to play at that level.”

One man who’s played consistently at the top level – 262 times – is Zaha, who returned to south London after competing with Ivory Coast at the Africa Cup of Nations.

Vieira updated on how the No.11 is faring, saying: “Wilf’s been training in the last couple of days with the squad since the Africa Cup of Nations. He had a couple of days off and is feeling good. He’ll be part of the squad travelling to Norwich and has been doing well.”

Vieira faces something of a selection headache with Zaha back in-line to play for Palace. He has the other attacking options of Olise, Eberechi Eze, Jordan Ayew, Christian Benteke, Jean-Philippe Mateta and Odsonne Edouard.

“The talent is fantastic to have but what is most important is the team,” the manager said. “We built a squad where players take confidence and belief in their ability. We have a couple of players who can score and create chances.

“Of course we are stronger with a really good Wilfried Zaha on the field because of his ability to create danger, but it’s important for him to understand he needs the team around him to perform and do what we know he can deliver.

“Wilfried is an important player for us, for the football club. There is no doubt about his talent. What is important and what I want is other players to take responsibility; I don’t want to put all that responsibility on one player.

“When you are Wilfried Zaha with his experience and what he’s done in the Premier League the focus and eyes are on him. That’s normal. But the players around him will need to take responsibility.

“Macca [James McArthur] in midfield is coming back. This is a position I want to be in – it’s really difficult to choose the starting XI. We are really glad with the squad and talent we have and now it’s up to me to make the right decision.”

Finally, Vieira sought to explain how he handles situations whereby players are moved to the bench, or don’t start for several games:

“The best decision and the best way to explain is for them just to do what needs to be done to get into the starting XI. As a manager, and I think it’s the same for every single manager, you want to put the best XI on the field in the hope they perform. It’s nothing personal and the players understand that.

“The players on the field need to fight and perform to keep their position. Having different options, sometimes the manager doesn’t need to speak [to the players]. The players understand what they need to do. Having those options brings the best from those players if they want to play or start.”