Sam Johnstone says he has arrived at Crystal Palace as he approaches the peak of his career, and hopes he can devote his best years to his new club – and earn a recall to the England side in the process.

Johnstone joined on a four-year-deal after his contract at West Brom expired, and spoke to Palace TV for the first time since putting pen to paper.

“Twenty-nine for goalkeepers is coming into your peak, and that’s where I am at the moment,” he said. “I had my loans growing up, and then did my first permanent move to West Brom for the last four years which was great, and now it’s time to do another step and go again.

“It’s a great opportunity for the lads to take on what they did last year into the new season and get higher up the table. The lads will have loved doing well last year, being a success and finishing in a good position in the Premier League.

“But as footballers, you want to better yourselves. I think that will be an aim for everyone at the club, all the players and the staff, to do it again – and better.” 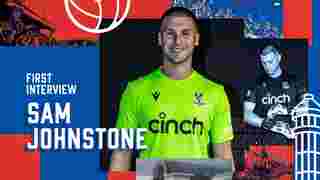 Johnstone was a part the England squad that reached the European Championship final in 2021, and hopes that his form at Palace can see him regain his national team place.

“It was unbelievable, a great experience – something that you’ll live with forever,” he said of the tournament. “It feels a bit weird that you were there. We did well, we got to the final and with it being in England we had our family there.

“Being in that squad, training every day, preparing for those high level games is something that everybody dreams of. Once you’ve had a taste of it, you want to keep going and getting into those squads, being with those high level players like I will be here day in, day out.

“That’s an aim personally for me, to get back in those squads. Hopefully I’ll settle in well here and that can be something I’m looking forward to.”

Johnstone feels he can fit in with Patrick Vieira’s possession based style of football, and that competition from a particularly strong goalkeeping unit at Palace can drive him on.

“I met the manager, which was good,” he said. “I hear all good things about him and can’t wait to work under him.

“Everybody now is wanting to play football, and I think last year [Palace] did it and were good at it. It’s something the modern day goalkeeper needs to have in the locker as well. It’s something we did at West Brom over the last few years, so hopefully I can settle straight in with that as well.

“As everyone knows, the goalkeepers are together, separate [from the main group] most days, so you need to push each other and support each other. I feel like that’s what this group has.

“Obviously Dean [Kiely] the ‘keeper coach will implement that as well. The lads are working hard, pushing each other but having a good time at the same time.”