Zaha on charitable work and relationship with Stormzy

Wilfried Zaha has revealed his desire to make a difference during his playing career, as he spoke openly about the impact his charitable foundation has made around the world.

“Since I started playing when I got a proper, decent contract I’ve been giving 10% of my wages back [to charity],” he explained. “My sister has got an orphanage but I kind of take care of it, so it comes under the umbrella of my foundation.

“It takes care of orphans, it takes care of widows with kids if they can’t afford school clothes or school equipment. I’ve tried my best to do what I can.”

In south London too Zaha has been transforming the lives of young people.

“I’ve got a little football Academy that I’ve started here,” he said. “Kids can come down and just enjoy playing football. It’s every half-term or Easter break. Every now and then I’ll pop by to see the kids as well.

“I think compared to other people’s academies it’s just started, but I know the possibilities are endless. Hopefully I can get [it to be] massive and loads of kids [can] go there.

“It’s just an idea that I've managed to put together right now, but I'm just going to see how it goes and see what the bigger picture is.”

The Palace man is keen to give back to the area he grew up in – a commitment he has in common with fellow south Londoner and rapper Stormzy. 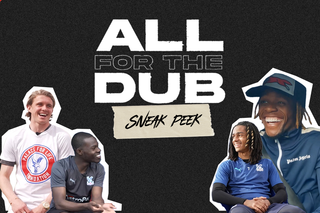 “[Stormzy] is just a friend from the area really. I’ve watched his growth from just putting videos out on YouTube, no one paying attention and me being his friend.

“Obviously I had a bit of a platform so I thought: ‘Yeah, people need to check him out.’ So it’s nice to see, but he’s just a friend from the area.

“We’re both heavily into giving back and we both believe in God, and so it’s like God has blessed us with the opportunity and we each like to help out.”

Zaha says this faith is a crucial part of his career, particularly during difficult periods in the past.

“I’ve gone through so many different scenarios where I’ve felt like I've had to just rely on my faith because at a point it felt like that was all I had,” he explained. “Because when you’re going through certain things in life, it just feels like you may have people around you but you feel alone.

“I’ve gone through stages where that’s how I felt, and it just felt like God is the only person who I could fall back on.

“Me doing that has kept me and brought me to where I am now. It's just faith.”