Two goals from John-Kymani Gordon saw Crystal Palace come from behind to complete a league double over Chelsea in a dramatic afternoon at the Academy.

It was a valuable afternoon for the Eagles not just in terms of the result, but also for the minutes gained by Nathan Ferguson as he continued his recovery from injury. The full-back had a fight on his hands in the form of George Nunn, but coped well and managed 75 minutes before being withdrawn. 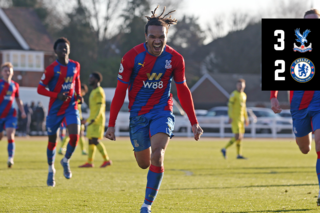 The visitors were certainly the more comfortable of the two sides in the opening exchanges, stroking the ball around as Palace sought to implement their aggressive high-press.

Possession was proving hard to come by, but the chances they conceded were few and far between: Ben Elliot tested Owen Goodman from distance, before Jayden Wareham volleyed over after finding space in behind.

Palace had opportunities of their own. Isolated for the most part early on, Jesurun Rak-Sakyi reminded everyone of his ability as he turned and ran at goal, skipping past two challenges before firing over from the edge of the box. Moments later Lucas Bergstrom parried behind Nya Kirby’s stinging drive.

In stoppage time before the break, Chelsea finally forced an opening. Rising to meet Harvey Vale’s corner was Mbuyama, his glancing header falling for Joe Haigh at the far post; as Palace scrambled to clear, the forward managed to poke the ball home.

After the restart Chelsea were just as dominant, but this time Palace’s counter-attacks had real menace behind them. Rak-Sakyi was more involved, and John-Kymani Gordon pressed and probed whenever the defenders had possession.

It was the latter who made the difference, latching on to Rak-Sakyi’s blocked shot only to be brought down by Alfie Gilchrist; the referee immediately pointed to the spot. Up stepped Kirby to level the scores from 12 yards.

Often scrappy at times, this match had developed into a tough battle with some of the tackles reminiscent of Patrick Vieira and John Terry's era, both of whom were watching from their respective camps.

With 10 minutes to go and legs tiring, chances began to emerge. Palace had been under the cosh, but in a rare foray forward Rak-Sakyi picked out Kirby on the edge of the area. The midfielder’s effort was pushed away by Bergstrom but Gordon was the first to react and fired home.

Almost immediately, Chelsea struck back. It was a set-piece once again, Gilchrist meeting Vale’s delivery and seeing his header deflected into the back of the net by several desperate attempts to block.

As the visitors pushed for a winner, Palace bided their time, and with five minutes to go they pounced. There was a slice of luck about the winner, as Gordon’s long-range effort took a huge deflection of the outstretched leg of Gilchrist and wrong-footed the goalkeeper, but Palace were ahead once again.

Five minutes of additional time saw Palace come under pressure from Chelsea as they poured forward in search of a winner, but Paddy McCarthy’s side held on for an important three points, completing a league double over the Blues and sitting fifth in the table.