Crystal Palace recorded a remarkable victory after a tough battle today as they stormed what was swiftly becoming an impenetrable north London fortress to take three points from Arsenal with three emphatic goals.

The Eagles gripped their prize firmly in their talons after nerve-racking spells on the back foot, valiantly battling the Gunners' pressure, but their clinical finishing going forward and on the break earned them three points set to linger long in fans' memories - far beyond their impact this season.

The win was the first at the Emirates for an away side in the league since August 2018, making Palace's charge in Holloway one of their finest results of the season.

As perhaps expected given recent history between the two clubs, Roy Hodgson's were the first side forced into defensive action when Mesut Ozil found himself striking an effort at goal on the edge of the box, however his opening shot was as tame as the first minute would typically expect and Vicente Guaita was able to hold it with ease. 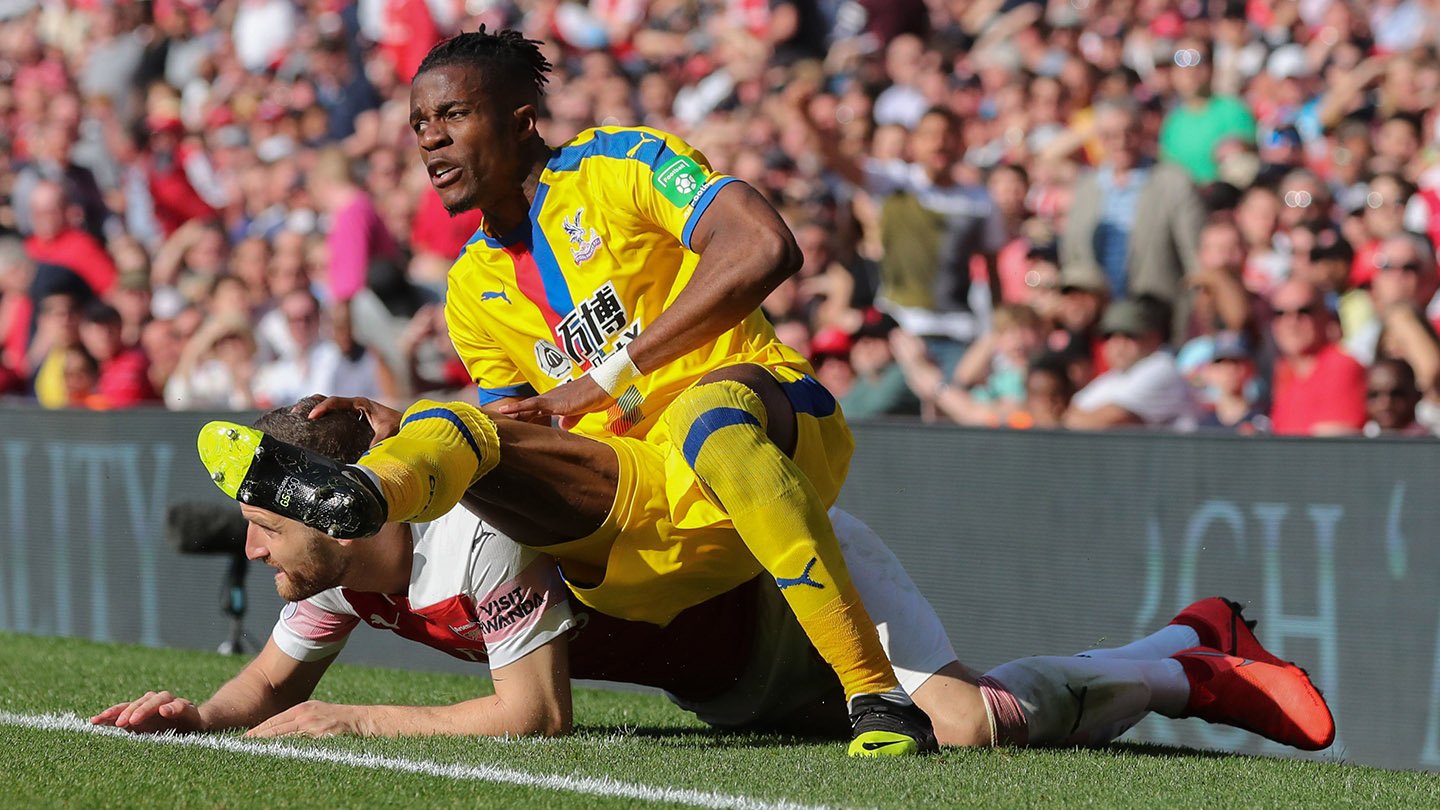 Another half-chance then fell the host's way as Konstantinos Mavropanos worked his way into the Eagles' box before angling to cross and forcing a ball into the Gunners' danger zone. However his deflected pass looped down to the wrong man amongst a crowd of talented finishers and Mohamed Elneny sent an attempt ballooning over the bar.

At the other end of the pitch, similarly unlikely threats were on hand to send the Emirates into a unified intake of breath as Scott Dann powered a header at goal from a well-placed corner only for Martin Kelly to deflect the effort high under pressure from the red and white defence.

It wasn't to impact the match moments later when Palace, certainly well involved in the opening exchanges, took the lead. On his 200th Premier League appearance, Christian Benteke was gifted a chance by the deft boot of Luka Milivojevic, whose cross from distance glided over the Arsenal defence and onto the head of the Belgian frontman, who buried the ball adeptly - the exact marksman needed in the perfect situation. 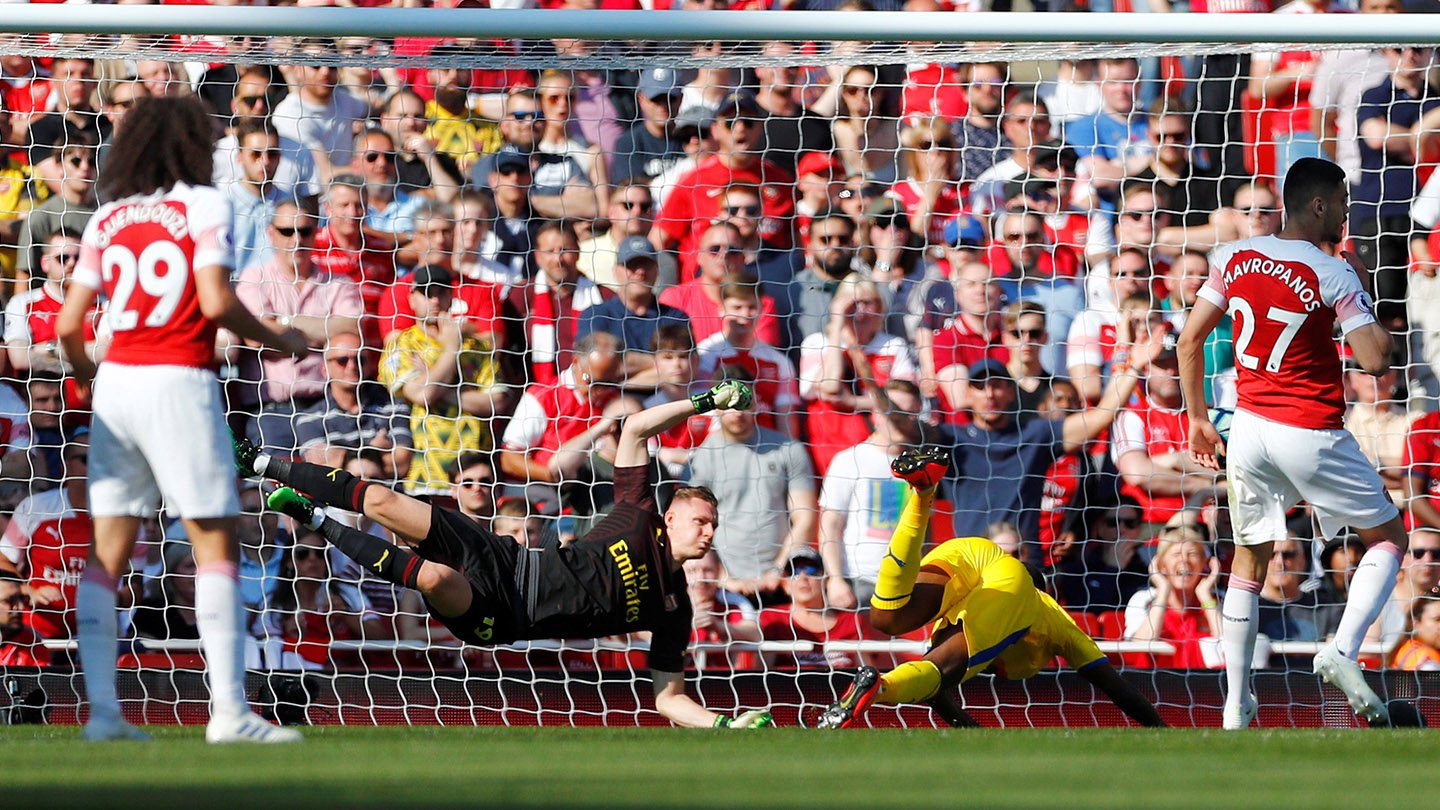 Offered a chance to make the lead a short-lived one, Alexandre Lacazette was left cursing his balance in the box as he attempted a smart turn on the spot to strike home from close range, however his feet were behind his head and the ball scuffed off his leg and out, eventually, to safety.

Another threat was posed to the visitors a few minutes later when, breaking from a Palace attack, Pierre-Emerick Aubameyang was denied smartly by Milivojevic, who stole the ball from his head before Shkodran Mustafi knocked over from the resulting corner.

The Eagles had received a multi-pronged warning they were determined to heed, though Arsenal's prowess in offence kept them penned in for large spells. Anytime Palace carried possession further up the pitch, they drove further from their fans - outnumbered by over 50,000 voices - who willed them forward from their standpoint behind in spite of the tense, gritty performance they stood watching. 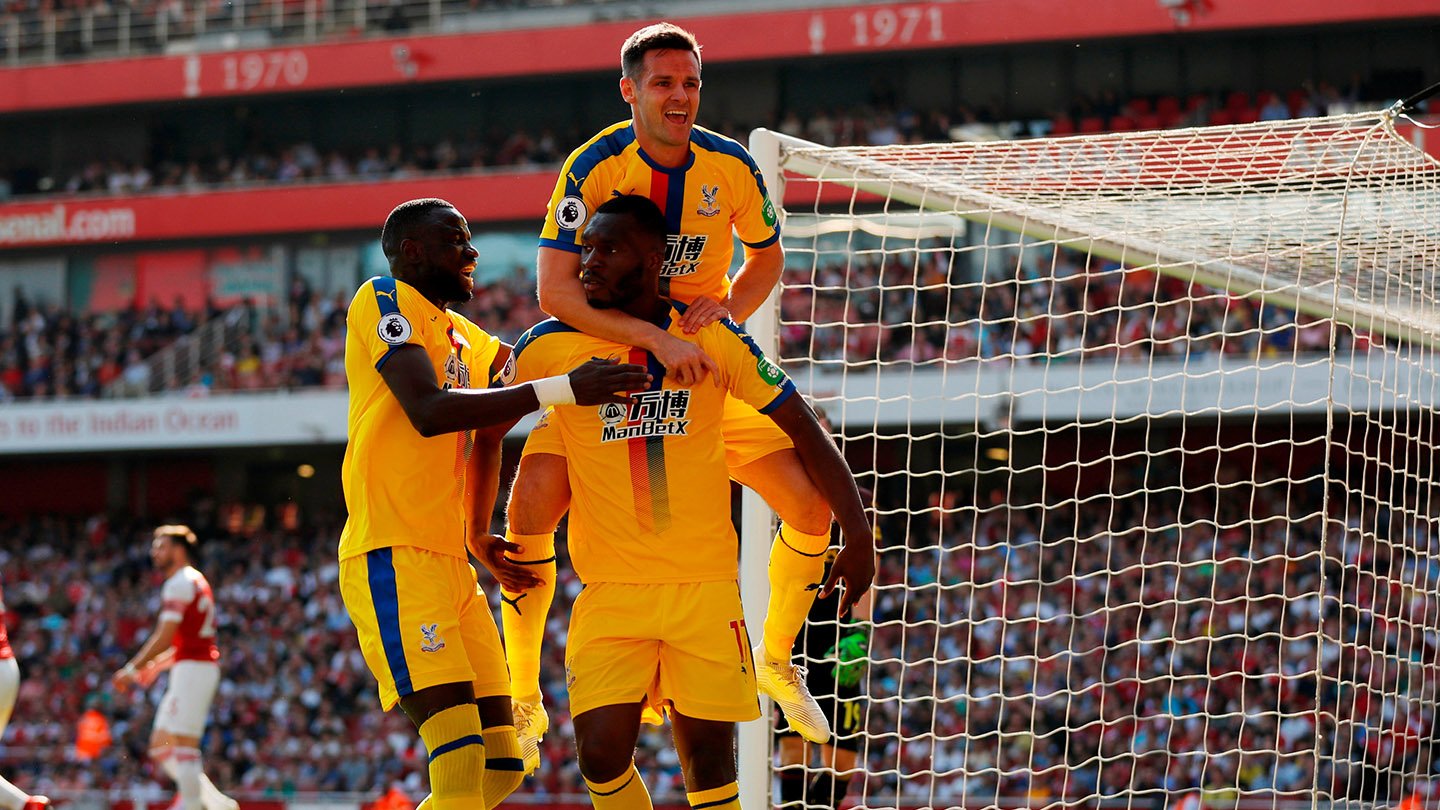 The steady, reliable support from the Emirates' south London contingent was periodically interrupted by spells of excitement from the larger home crowd, however, who were kept from growing idle by the almost cyclical charges of the Gunners' attacking infantry, setting up camp in and around the Eagles' box.

It was on the break that Palace - perhaps expectedly - looked most dangerous, and Benteke was denied his second by the raised flag of Andy Halliday after Wilfried Zaha thread him through acutely but a little too late. The net bulged in vain.

In the face of the Gunners' ascendancy, though, Palace were the side who finished the opening half brightest and Cheikhou Kouyate was unlucky not to net three times in half a minute as a spectacular double save by Bernd Leno denied the Senegalese midfielder from close range.

With the first half winding to a dramatic close, the Eagles weren't done, and with a minute's extra time in its final throes, Benteke looked hungrily for his brace - but struck too high from the centre of the box, allowing Jon Moss' whistle to sound Arsenal's protection from further damage. 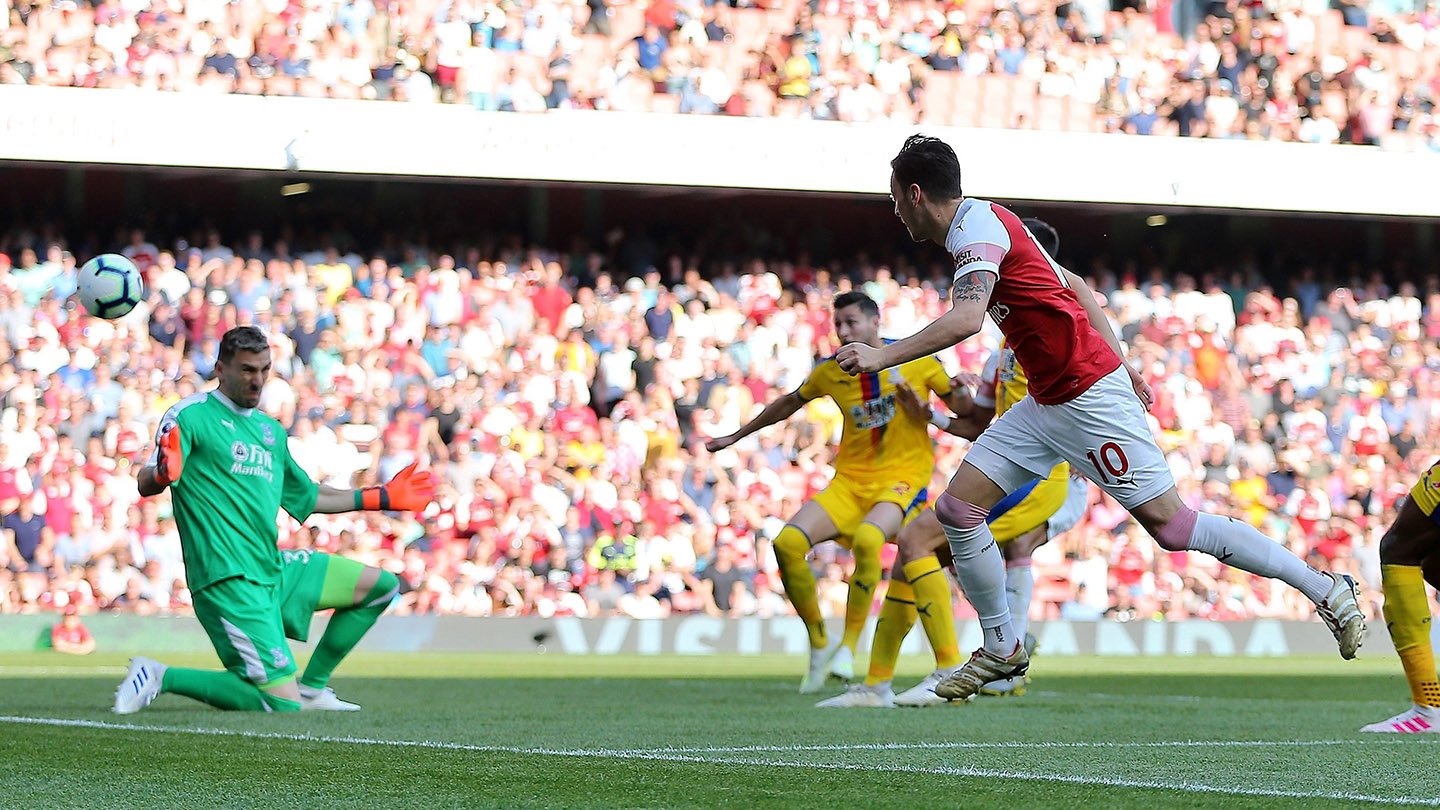 Palace's ability to hold off the home side's offensive onslaughts didn't last long into the second half, though, and the damage was inflicted confidently by Ozil, who had been played through by Lacazette with an inch-perfect ball the German midfielder had to strike home.

Though with a less fatal outcome, Sead Kolasinac was next to unnerve the visitors as he caught a volley 20 yards out that Guaita did well to leap to and hold.

Palace's talismanic Zaha refused to allow the north Londoners another moment's dominance, however, and, knocked through by a remarkably delicate headed ball from Benteke, the winger skipped one-on-one with Leno and rifled home with precision, wheeling off to launch into celebration with fans caught in the blazing sun nearby.

Two almost became three just minutes later when eventual goalscoring trio Zaha, Benteke and James McArthur formed a spear-headed attack to bear down on Arsenal's goal, however its Scottish centre was only able to shoot into the arms of Leno from the edge of the German's box. 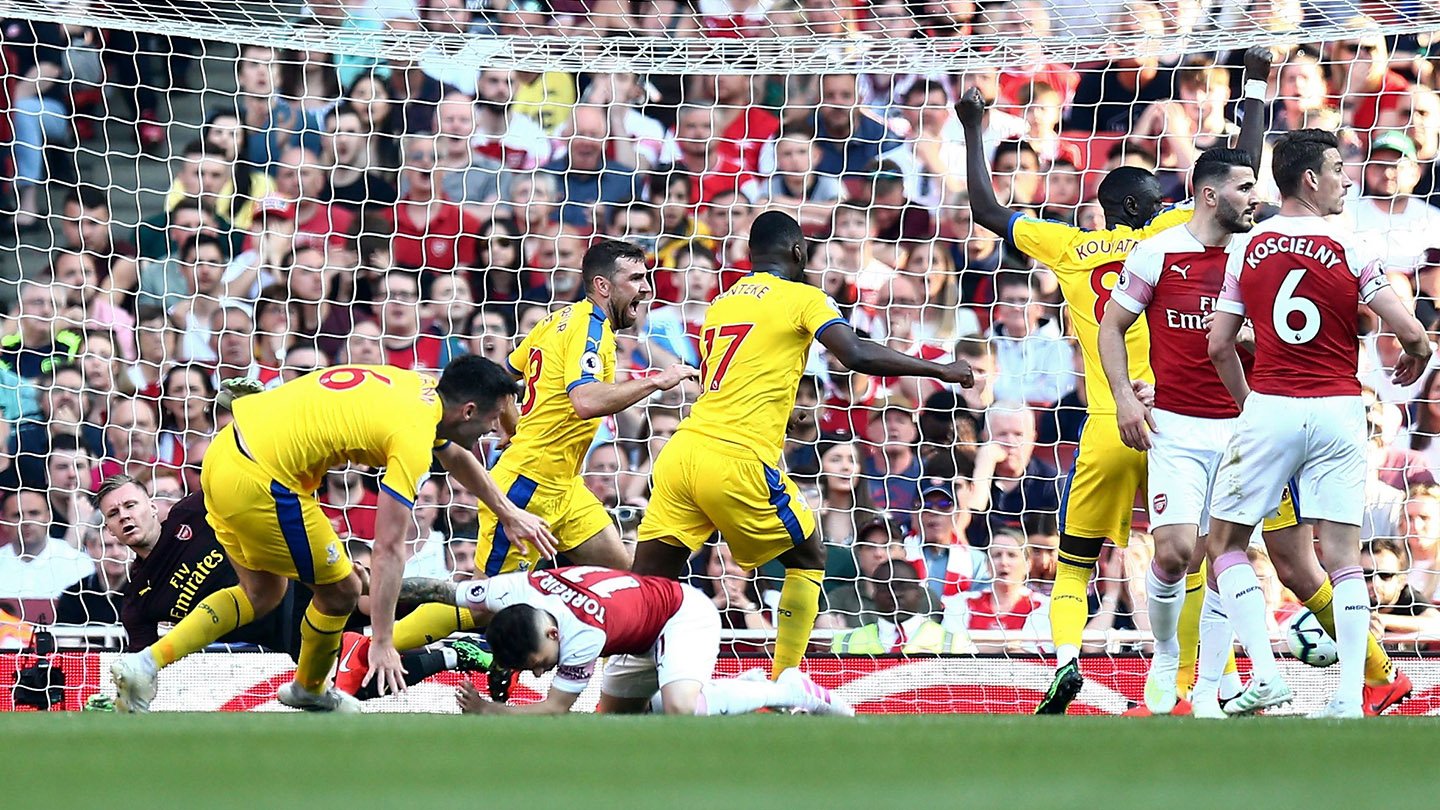 The Scotsman didn't need another chance to emphatically turn two into three, however, when he stood close to goal and glanced home a towering Dann header, sending the visiting south London faithful into vociferous raptures; north London silent in the balmy Spring weather bar its guests' vocal celebration.

The home crowd were given their own time to cheer, though, and Aubameyang teed-up a nail-biting final 10 minutes as he buried the ball into Palace's net, reducing the deficit to one as he did.

The Eagles refused to simply soak up the home side's pressure and await full-time in the final exchanges when Zaha drove into their box to catalyse a tense attack that ended with a Kouyate shot held at full-stretch by Leno. 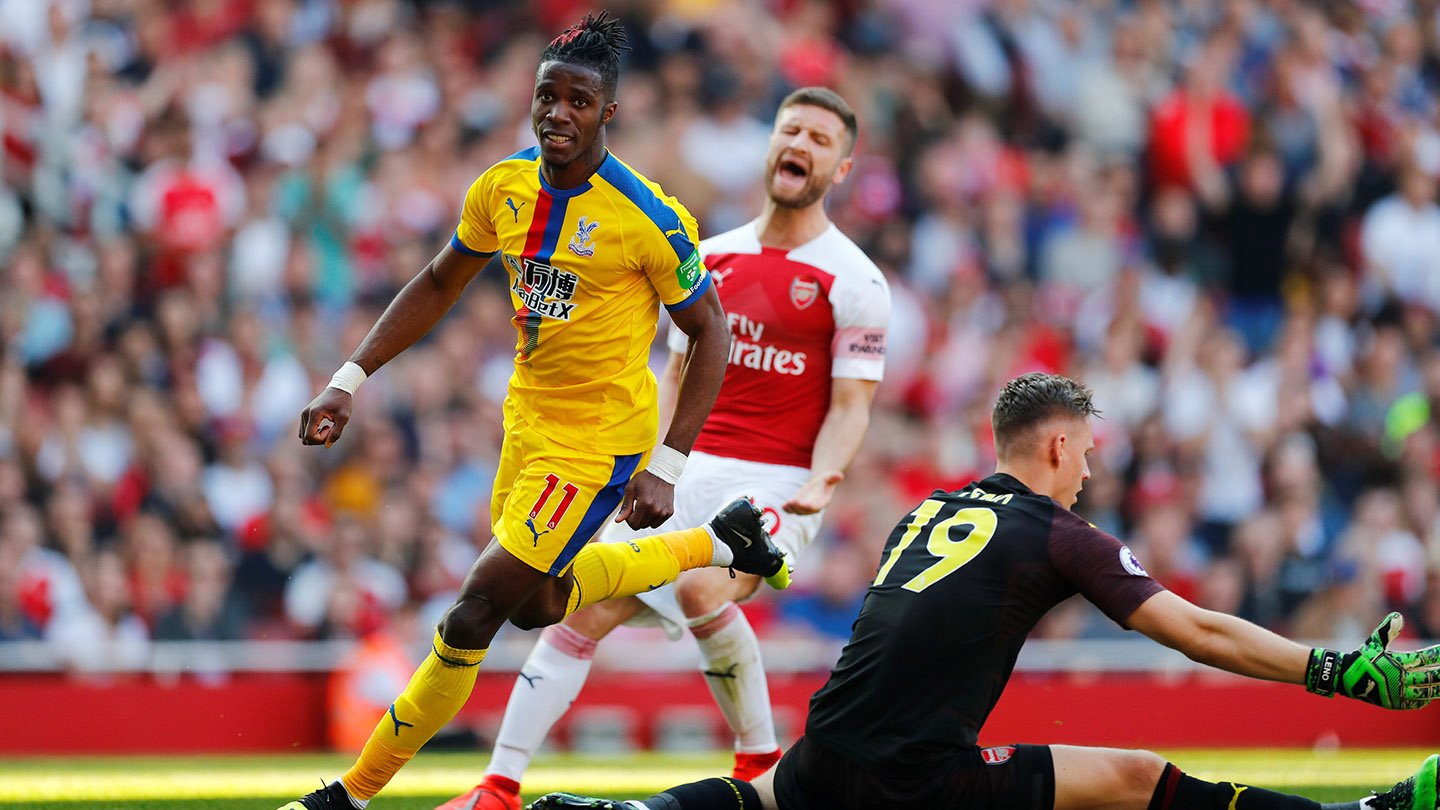 The game's most astounding save came shortly after from its Spanish shot-stopper though, as Guaita flew cat-like across his goal to instinctively tip the ball from his line and preserve Crystal Palace's once-unimaginable lead.

Squandering the clash's last chance, substitute Alex Iwobi then struck too softly into the Spaniard's arms before the Emirates erupted in an isolated corner at the final whistle; three points and three goals the prize after a successful Palace storming of one of the Premier League's most sturdy fortresses.

For full post-match reaction and free highlights, make sure to keep an eye on Palace TV either by clicking here or 'Palace TV' in the official Palace app. To vote for today's Man of the Match, head to the Palace app now.