Goals from Jesurun Rak-Sakyi and Sion Spence fired Crystal Palace Under-23s to an impressive victory over league leaders Leeds United, who were reduced to 10 men in an action-packed Premier League 2 encounter.

On the back of nine straight wins, the visitors arrived in south London as favourites to make it a perfect 10, but came up against a Palace side gaining a reputation at this level for their resilience.

The opening minutes saw both sets of players size one another up, with Leeds’ frantic pressing game reminiscent of Marcelo Bielsa’s first-team.

However, Palace were not afraid to impose themselves in the opposition’s half, and won a free-kick on the edge of the penalty area for the first real sight of goal; Sion Spence curled over the crossbar.

At the other end, Oliver Casey seized upon a loose ball from a corner to unleash a snapshot towards goal, but his effort was blocked.

As the game began to settle into a familiar rhythm, the visitors’ gameplan was upended by an early dismissal.

As Spence raced forwards, supported by Palace bodies on the break, he was brought down by Crysencio Summerville; the referee had no hesitation in reaching into his pocket and brandishing a second yellow-card.

Naturally, the momentum shifted in Palace’s favour, and Shaun Derry’s side dominated the ball for much of the first period. 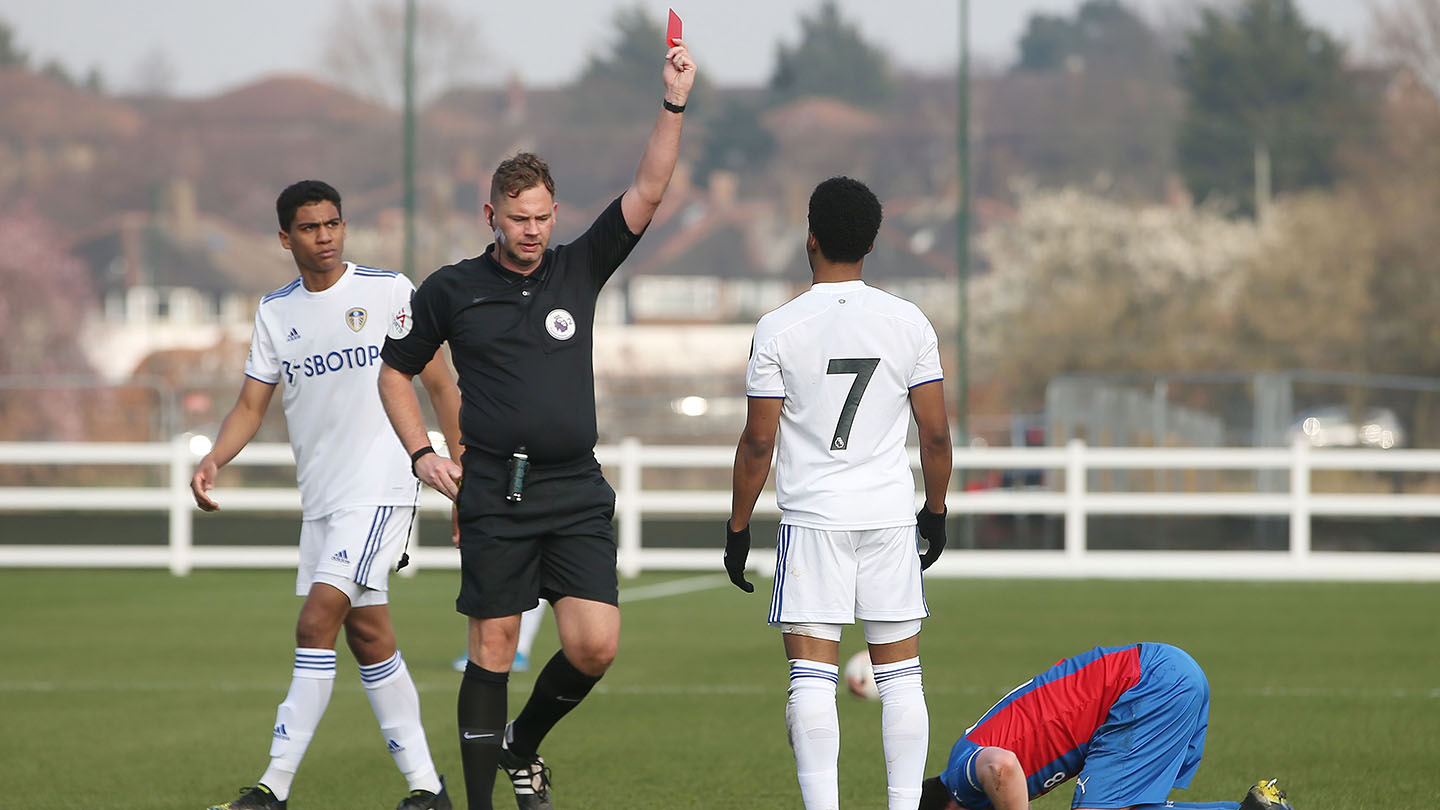 John Kymani-Gordon was heavily involved just weeks after turning 18. From a wide free-kick, he found space at the far post to collect the ball, after Jay Rich-Baghuelou’s couldn’t connect with a header; his volley was well struck but Elia Caprile managed to push it behind.

Moments later he was causing trouble once again, this creating space for himself with a neat bit of footwork, before firing over the crossbar.

Leeds had their share of chances, with Gelhardt by far the most dangerous player, cutting in on his left to sting the palms of Ollie Webber.

But Palace were the more dangerous. Jesurun Rak-Sakyi, after a quiet start, began to impose himself on the match in his step-up from the Under-18s, twice slipping in for Spence but each time the angle was too tight to convert.

Leeds made two changes after the break, setting up to continue their energetic pressing game albeit with a man disadvantage.

It was Palace who started the brighter however, and soon they were ahead. Found by a pinpoint cross field ball from Jake O’Brien, Spence’s finish beat the goalkeeper but deflected back off the inside of the post.

In the melee in the area, that ball fell to Harlem Hale, who showed impressive composure to ignore the temptation to shoot with Leeds bodies ahead of him, and instead square for the oncoming Rak-Sakyi to fire home, and score his first goal at U23s level.

The goal seemed to strengthen in the minds of the visitors the need to keep attacking, despite the numerical disadvantage. Their passing was crisp and the press remained constant, meaning there was no room to relax for Palace despite the lead. 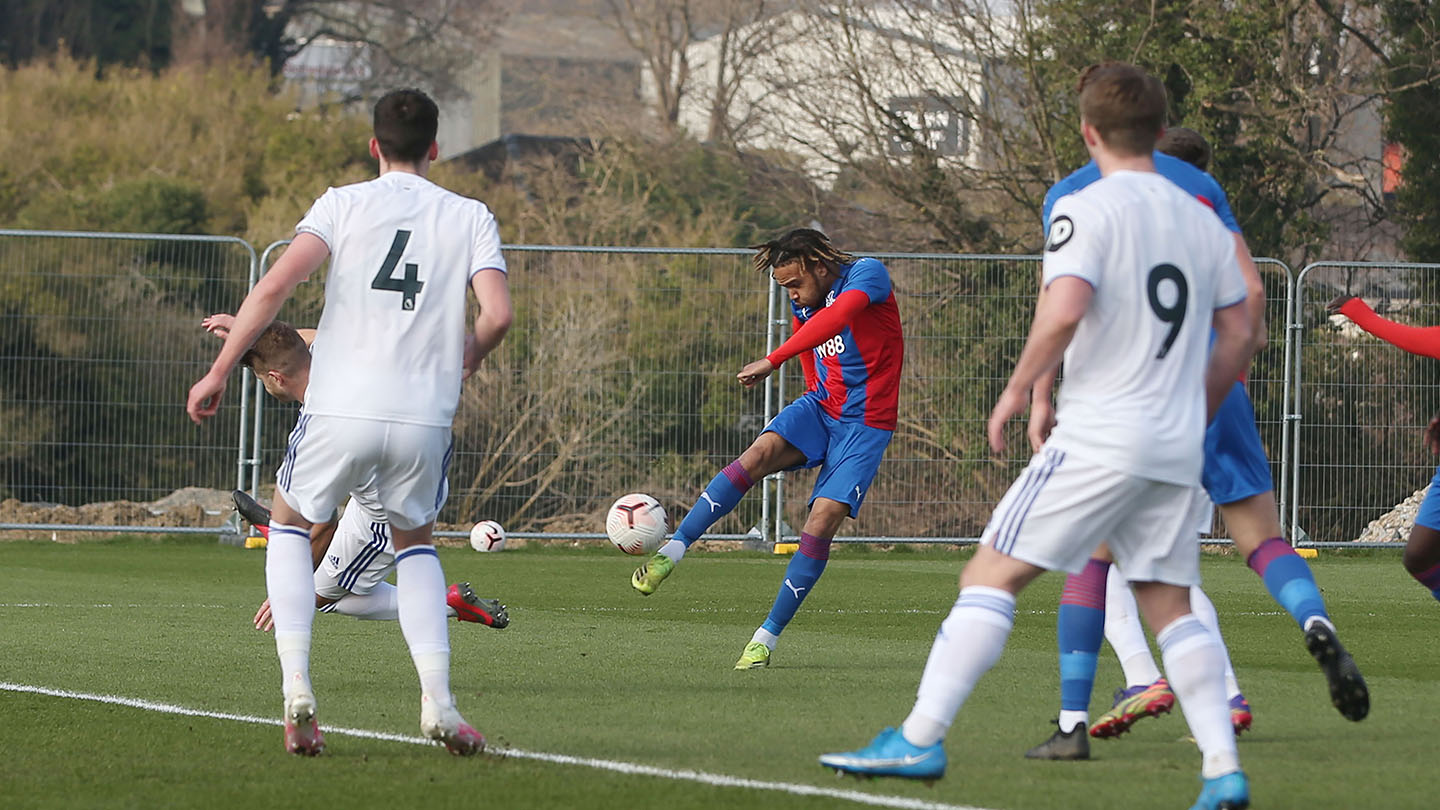 The final ten minutes were scrappy for the hosts, and Leeds came within inches of snatching a point. Coming out to claim the ball from a tight angle, Webber was chipped by the attacker, only for Rich-Baghuelou to hook the ball off the line.

As the game entered added time, Palace could finally breathe freely. With the ball deflected into space in behind, Spence raced into the area and poked past the advancing goalkeeper from a tight angle.

The goal secured an important victory for the young Eagles, inflicting Leeds’ first defeat in ten games and solidifying their position near the top of the Premier League 2, Divison 2.