Crystal Palace produced a comfortable 6-1 win against fellow Championship side London Bees in the Continental Cup, with the visitors’ Nicola Gibson receiving a red card in the early moments of the game - putting them down to 10 players for the majority of the match.

Palace were hoping to bounce back from their 4-2 loss against Bristol City as they hosted London Bees on Thursday, with the Eagles recording a frustrating defeat in their previous Continental Cup fixture. Meanwhile, the Bees managed a narrow 1-0 triumph against Lewes in the competition’s second matchround - with both clubs sitting on three points as they entered the game.

The Eagles were able to produce the first chance on the night as Cherelle Khassal went one-on-one with Sarah Quantrill, however the ‘keeper was able to block the shot comfortably. Moments later, the hosts landed another shot on target through Coral-Jade Haines’ curling effort, with Palace appearing the more dominant side in the first five minutes.

However, their early efforts were wasted when Bees broke the deadlock in the eighth-minute with a fabulous strike from Amelia Hazard. The talented winger took her chance from 30 yards out and was rewarded with a spectacular goal: 1-0 to the visitors.

A few dramatic minutes followed as Bianca Baptiste nearly secured the first goal for Dean Davenport’s side, going around the ‘keeper and producing a powerful strike. However, Gibson handled her effort in a desperate clearance - resulting in a straight red for the Bees player. Haines stepped up to take the penalty and comfortably slotted it home, putting Palace firmly back in the game.

Baptiste finally got her goal two minutes later, with the forward striking past the ‘keeper into the bottom right corner, with the scoreline reading 2-1 to the Eagles. 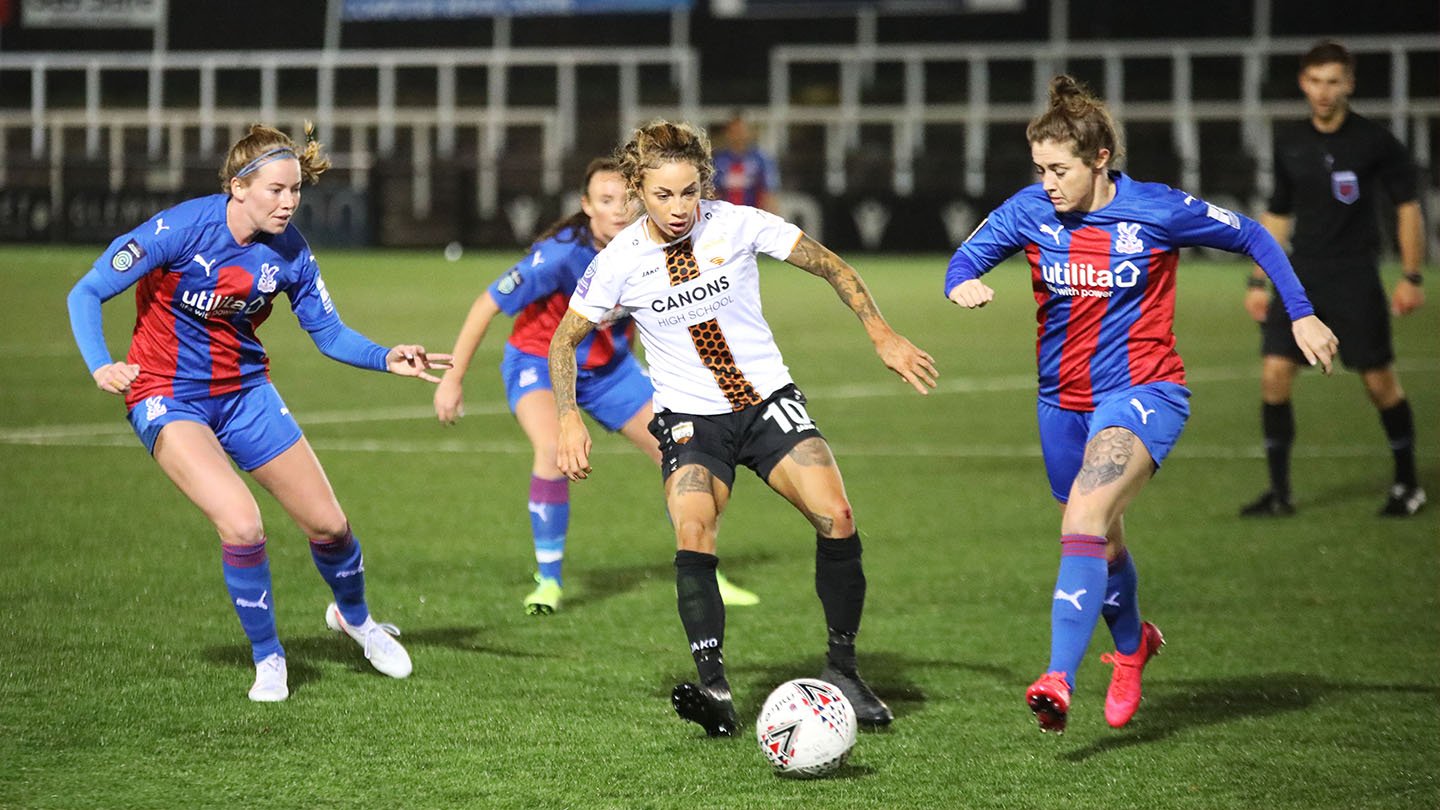 Palace continued to highlight their dominance from a short corner in the 30th-minute as Siobhan Wilson swung the ball into the area. The strike was then deflected into the back of the net to notch Palace’s third.

The Bees had a few promising chances in the latter stages of the first-half, with Amelia Hazard almost getting her second of the night, but the youngster was unable to convert from a tight angle.

However, it was Palace who struck again just before half-time, featuring fine build-up play across the team and a superb strike from Khassal.

Following a triple substitution for the home side, the Eagles were able to get another on the scoresheet 15 minutes into the second-half, with Baptiste striking home from close range.

With Lee Burch eager to bring his side back into the game, the coach also made a triple substitution after bringing on Mel Filis at half-time, with Faye Hazelton, Evie Gane and Mollie Dench now also on the pitch.

Amy Taylor tried her luck with a long-range shot in the 70th-minute from which Hazleton was forced to produce a fantastic save. The Eagles then continued to produce some great chances, including a wide shot by Andria Georgiou, with the team clearly eager to get on the score sheet once more.

In the game’s final minute, Taylor was able to round off the perfect evening for the hosts - calmly slotting one past the substitute ‘keeper.