See inside how Palace players' diets are managed

Crystal Palace's Head Chef and Strength and Conditioning Coach recently spoke with Palace TV to reveal how the players' diets are managed.

The pair revealed what considerations they have to take when preparing and serving the lads' food, including accommodating any pescatarians and taking into account the time of week.

"While I’ve done bits on nutrition in my past there’s never been such an emphasis as there is here," Head Chef Will Britton says. "You have to be really hot on what you’re doing with the food and when you’re delivering that food. The time they have it is important and that’s set out by the [conditioning] team ahead of time." 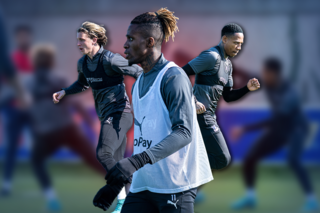 Britton says shortly after joining last summer he had a meeting with the Training Ground's Head Chef and Patrick Vieira to discuss their approach to nutrition.

He reveals Vieira's attention to detail: "I had a very early meeting with myself, Khayro [Medjahed], who is the Head Chef at the Training Ground, and Patrick at the start of the season. He was talking to us about the nutrition and said: ‘If I can get literally an extra 2% out of the players because of the nutrition, I’ll take that.’

"Khayro... will have regular meetings with the nutritionist and they will put things in place."

Strength and Conditioning Coach Frazer Findlay echoes Britton's comments on the importance of nutrition, saying: "We’ll screen them and when we screen them we’ll have a sort of menu of supplements. We have things such as Omega 3 which reduced inflammation, collagen shots which help with tendon health and protein shakes.

"We’ve got no vegetarians in the squad but we have quite a few pescatarians. So we need to make sure they’re getting a high level of protein with fish."

But this year the task of sustaining the diets of 30-odd athletes is that bit more enjoyable. Findlay says: "The players this year, because there’s been a change in the squad demographic and the squad’s a lot younger, it’s been nice because they’ve wanted to know the reason behind why they’re taking what they’re taking. The players last season knew that."

Watch the full feature above!