Crystal Palace are changing their crest to celebrate the club’s 1861 origins and its historic role in the development of modern football.

The new crest will feature 1861, the year the original team was set up by cricketers from the Crystal Palace Club, replacing 1905 on the badge, the year when the professional club was founded. The remainder of the crest will remain unchanged.

Formed in the grounds of the Crystal Palace, the club took part in the earliest FA meetings to agree the rules of the sport and played in the first FA Cup 150 years ago. 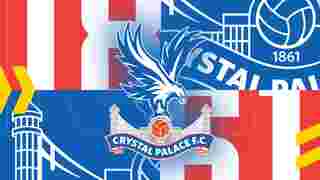 Following extensive research into newly digitised 19th century newspapers and other archives, a direct lineage has been established between the amateur team and the professional club set up by the Crystal Palace Company in the early 20th century, making it the oldest league club in existence still playing professional football.

The 1861 crest will appear for the first time on the club’s new strips for the forthcoming season, following five years of meticulous research by historian Peter Manning, who documented the unbroken link dating back to the formation of the first Crystal Palace team. Manning’s research and conclusions have been analysed and supported by the eminent professional football historian and author, Guy Oliver.

The Crystal Palace Company, which owned and operated the giant cast-iron and glass Crystal Palace on a 200-acre site in Sydenham, set up the cricket club in 1857, from which the football club was born. Seven of its members were involved in the foundation of the Football Association in 1863, as documented in the first FA minutes book. The team stopped playing matches for several years in the late 19th century – as did Civil Service F.C, whose foundation in 1863 is recognised by the FA and football historians – and when a professional Crystal Palace Club was set up in 1905 it acknowledged its connection to the Crystal Palace Company’s amateur team.

Crystal Palace Chairman Steve Parish said: “As a lifelong supporter of Crystal Palace, I was proud to learn that our history can be traced back to the Victorian cricketers of 1861 and the indisputable fact that the club played a central role in the very first FA meetings, which shaped the game we all love. It is fitting that we are recognising our unique history which began in 1861 in our famous crest.”

“The Crystal Palace Company disappeared from history and the Crystal Palace burnt down in 1936, but the football club continued and still exists in the form of today’s Premier League team, bearing the image of its birthplace in the club badge.”

Football historian Guy Oliver said: “The magnificent Crystal Palace building, its grounds and the company that owned them have always been an integral part of the identity of the club. And we need to look no further than the words of William Pickford, the journalist, FA president and FIFA vice-president, who in 1905 wrote that the Crystal Palace had revived its club ‘in a guise that the original members would never have dreamed.’ I see no reason to doubt perhaps the greatest of all early historians of the game.”

As supporters will appreciate, there are countless, longstanding signs and materials at the stadium that feature the 1905 version of the crest, rather than the updated 1861 version.

As a result, the club would like to inform supporters that these will be replaced in a phased and sustainable way over the next year or so, aligning with other planned stadium works.

For more information on the club's earliest history, view our dedicated 1861 page here.

You can also buy Peter Manning's book, Palace at the Palace, online via the Club Shop. You can also browse the 1861 Range online only here.