Crystal Palace players Nathan Ferguson and Leigh Nicol have had their off-pitch work recognised by being named PFA Community Champions at the club’s End of Season Awards.

The Professional Footballers’ Association rewards players who go above and beyond for their club’s community, in this case commending two figures who have hugely supported Palace for Life Foundation. 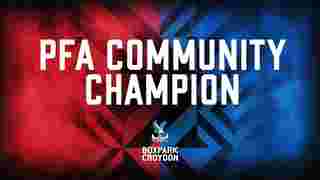 A men and women’s team player receive the award each year, with previous recipients including Joel Ward, Wilfried Zaha and Amber Stobbs.

Ferguson has supported Palace for Life throughout his time with the club. In 21/22 he attended a Get Involved session and, over a video call and in person, spoke about tackling racism with primary school students.

Nicol has long supported Palace for Life, joining video calls and dropping off presents for children at Christmas. She also uses her platform to address key issues, speaking up in the press and on social media about online abuse and more.

The pair were presented with their awards at the club’s End of Season Awards night at Boxpark Croydon by staff from the Foundation.

Ferguson said: “It’s been amazing. Unfortunately I haven’t been able to play, so I need to offer off the pitch as well. It was really good to see the kids and get to know the community as well.

“Next season is my season! [The support] has been great. Even off the pitch, I see [the fans] sending nice messages, and I appreciate it for real!” 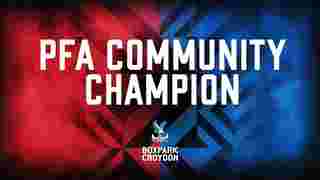 Nicol added: “I just love being around people. I've seen smiles on faces. I've given people a moment they won’t forget and something that as a child I would have loved myself.

“There’s nothing like it. I remember when I was a child, the adults that used to inspire me, volunteer, go out of their way to support me and my teammates. I always wanted to be that myself growing up.

“What’s not to love [about Crystal Palace]? I have great teammates, great staff, the fans are amazing. Its like a family and I feel like part of the furniture now!”