When Selhurst Park sits empty and Crystal Palace’s fans are home, working or flying the flag across the country, Sharon Lacey will be on her routine, customary walks around the iconic south London stadium.

As she goes, she will unavoidably bulk up a 500-strong to-do list and, in doing so, her own immense workload.
Serving at the club for over nine years, Sharon has previously been both Head of Marketing and Head of Customer Service but followed a different path in 2018/19 and became Palace’s driven Director of Operations. Her new, broad remit is truly unrelenting and covers everything from overseeing hundreds of matchday staff to managing structural issues in a 95-year-old warren of corrugated iron.
Her role entails tireless work through the season and beyond to tweak, fix and decorate Selhurst so that today, the fans’ experience in SE25 is better than it ever has been before. In six years, Crystal Palace have risen from bottom in Visit Football’s assessment of matchday experiences to second in the league.
The feat is a staggering achievement and comes from the continual hard work of Sharon and fellow staff across the club.
Sharon is fully aware that her job isn't complete, and will be working every month throughout the season to update the concourse, stadium and general facilities. However, returning to the Eagles’ home ground for the Hertha Berlin friendly at the start of 19/20, fans certainly noticed a host of improvements across the stadium - some of which can be found here.
But it’s not just the eye-catching new designs on concourses and beyond that Sharon and the team have arranged over summer.
Instead, the break has allowed a serious shortening of London’s lengthiest to-do list. For the hardened Selhurst faithful who camp at the base of the Holmesdale Road, battling not only the south London elements but the downpour from the leaking roof above them, the biggest job of all will come as a huge relief. 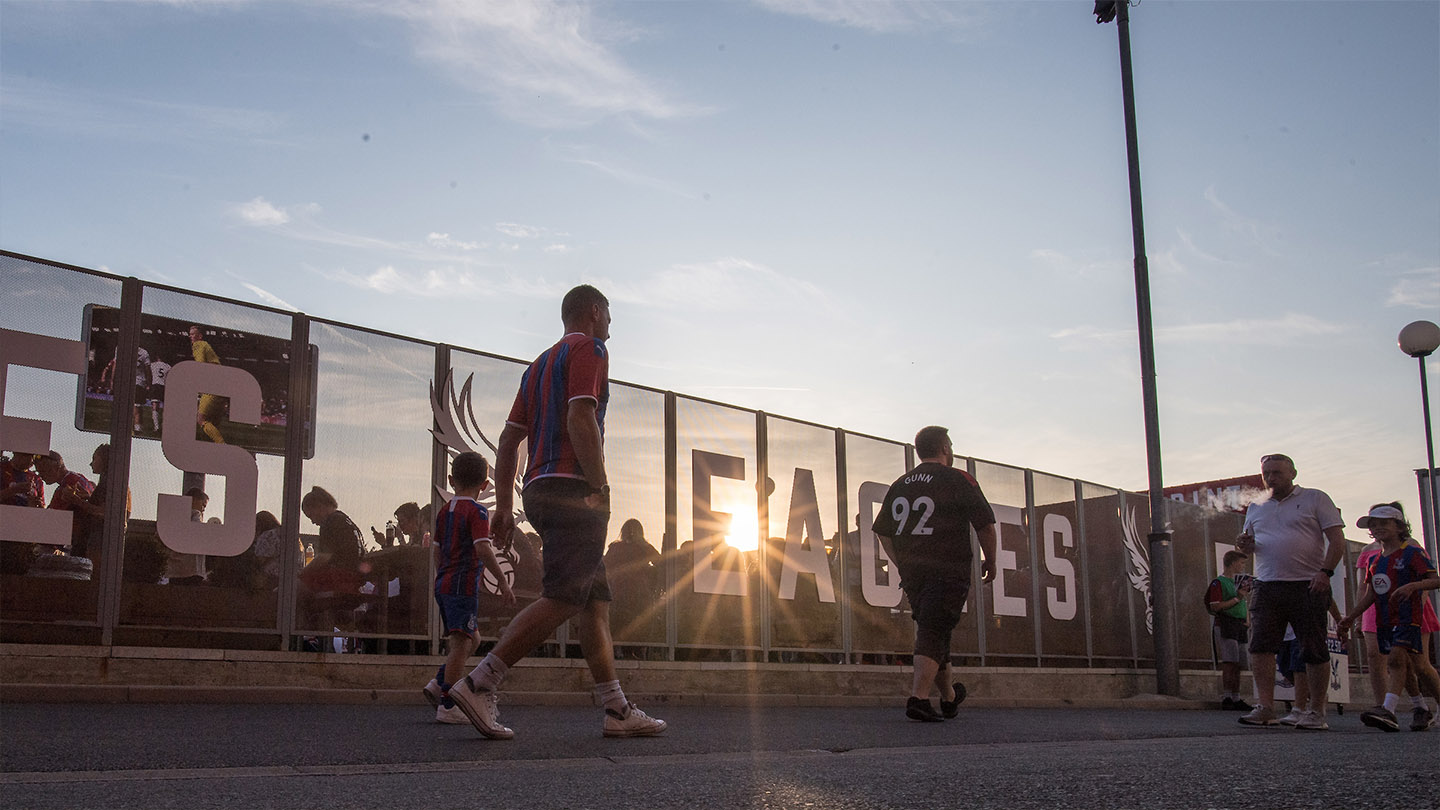 “A lot of people will know there’s a leak in the Holmesdale and that’s been there for four, five, six or seven years and ultimately we just had to stop complaining about it and get it fixed,” Sharon explained. “It’s not as simple as getting a ladder up there, we had to look at how we were going to get a team of people up on the roof safely.
“It’s the biggest challenge we’ve faced because you just can’t get up there. You can get onto the floodlights, you can get onto the roof of the Main Stand, but in the Holmesdale, you just can’t do it. We can’t get a cherry picker up there because it’s 25 metres high! We’ve been hanging out of windows and all sorts.
“We had to get a drone up there just to see what the problem was and I even had conversations with the fire brigade to see if we could pay to get someone up there! That’s the kind of level we’re looking at.”
But repairs on the scale of a colossal stand which towers above the townhouses below it are just part of Sharon's job and - despite their size - don’t prevent the smaller, human side of things getting their own determined treatment too.
Elaborating, Sharon said: “One of the small things that we’ve done that people probably wouldn’t notice is up in the Holmesdale. They had these metal bars on the Upper Holmesdale on the front row to stop people from falling forward.
"We’ve replaced them with Perspex so people can actually see through them. It’s such a small job but it will actually make a difference for those people that have to look over them all the time.
“And I’ll never forget, there was one guy in the stadium and I was speaking to him on a matchday and he was frustrated that he wanted a black tea but we only served tea with milk already in there. He could never have a cup of tea at the match and it was all he wanted.
“Straight away, we bought cups without the milk already in them and the nicest thing was that it changed that man’s experience at football. We can’t do anything about what happens on the pitch, that’s down to the players. But if we can do a series of small things that improve people’s matchday, then I think we’re winning.”
From the fire brigade to YouTube videos on fixes from plumbing to painting, Sharon couldn’t find her job any more rewarding and through it, it seems, she’s been converted by the allure of the red and blue…
“I’ve been to loads of different games now, from Championship to Premier League but at Palace there’s this strange forgiving nature for everything that happens! They’ve got the best banter, the fans, and so yeah - I suppose I’m a Crystal Palace fan and it’s where my heart is. I love the club.
“Turning around the club is like turning around a ship - you can’t just switch it in a different direction, you’ve got to take it slowly and do it in stages. I’m really proud of the club that we are and the club that we’re so close to being.”
Thanks to all of the staff at Selhurst Park and within the wider club, Crystal Palace has not stopped developing. And with Sharon at the wheel, it seems like that won’t be changing soon.