University friends and then-colleagues Dan van der Molen and Joe Mainland had modest intentions when they arrived at Selhurst Park in November 2012: to film a single-day feature with Chairman Steve Parish and scratch their itch to produce creative football content.

But Dan and Joe weren’t the only new names in SE25 as Parish watched his club face Blackburn Rovers, and, over eight years later, the pair had played a part in a worldwide Amazon Prime documentary.

The story behind When Eagles Dare, a five-part docuseries made in-house by Palace using archive footage from Dan and Joe, is one of fate and unique chances, much like the tale told on screen.

“We’d always sort of discussed that it would be good to something [media-related],” Dan explains, talking days after the series’ release.

“Straight out of uni I was a runner for Steve Parish’s company Smoke & Mirrors, [owned by] Tag Worldwide. That was when I first met him and had a brief chat and that kind of helped pave the way because it made it possible for me to have his email address and to get in touch later.

“[Joe and I] used to have loads of after-work chats and meetups and I’ve got a piece of paper somewhere where we wrote down ideas, and on that paper is ‘Crystal Palace’… We wanted to create a series of the ‘day in the life’ during matchdays.

“[For the first, with Parish,] we were there to follow Steve around and into the Boardroom and see what a matchday’s like for him in a standalone piece. But that was the day Ian Holloway arrived.

“Suddenly this piece that was meant to be a ‘day in the life’ started to feel like the start of a story. We couldn’t ignore it. We wanted to see where this would take us – and that’s why we came back.”

Conversations with CEO Phil Alexander, Sharon Lacey and Terry Byfield from the club led to Dan and Joe being told “‘Let us know what you want and when you’ll come back. We’ll help you with that, but no promises of what you can do and where this will go.’” 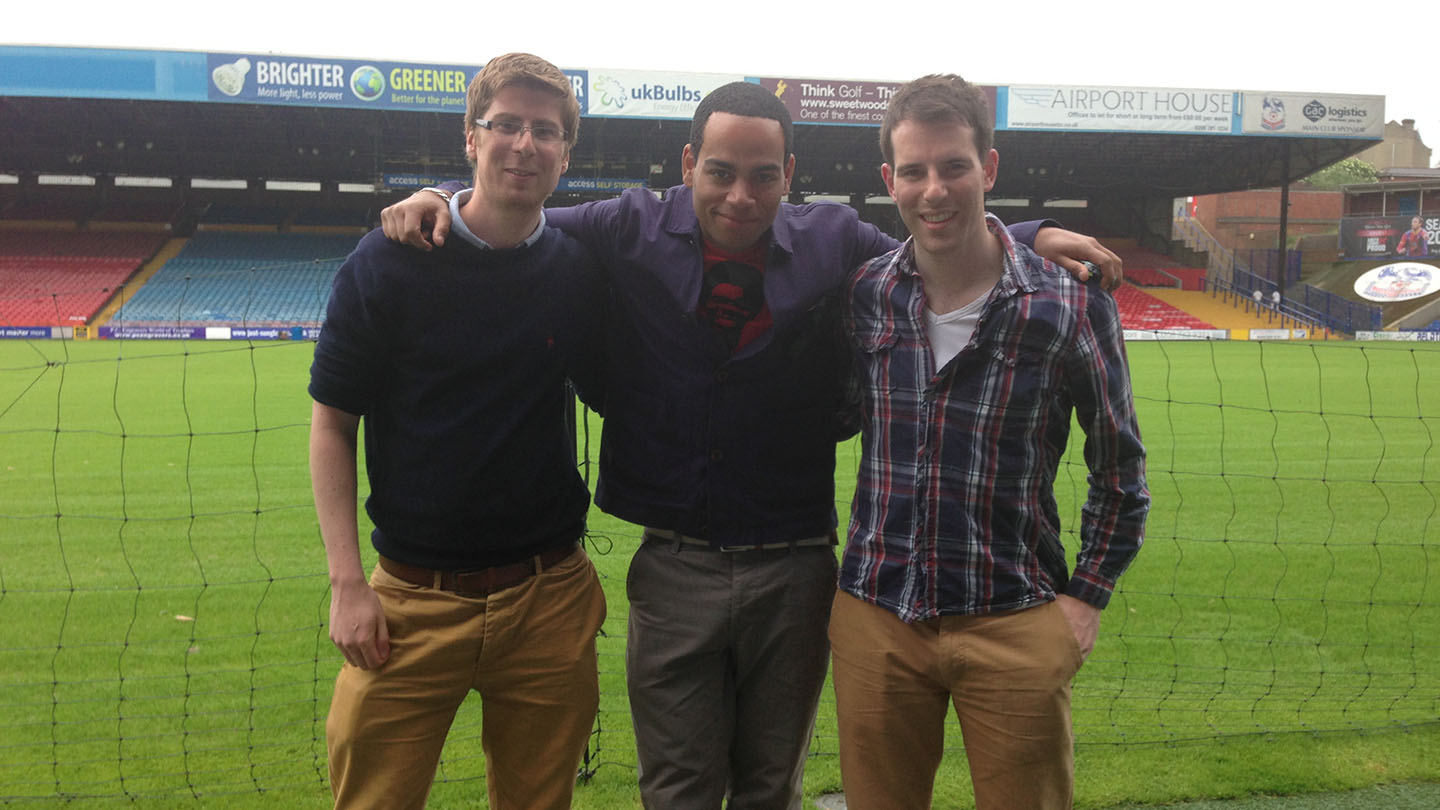 The pair began to plan the following seven months and share various ideas with the club on an ad hoc, informal basis.

“We were just able to come with a rough explainer of the day, what we were going to do, and they would just let us get on with it,” Joe says. “We were pitchside for all the games and after the games we were dotted around the stadium, always within the parameters of what was allowed.”

As Palace sustained their promotion push and experienced the various highs and lows detailed in When Eagles Dare, Dan and Joe followed the team along their journey, capturing much of the behind the scenes footage that helps bring the documentary to life.

Looking back on the most memorable times from the period, Dan says:

“We were slightly concerned that we weren’t capturing enough of Ian Holloway’s unique character leading up to the final day of the season so decided to specifically focus on him in the game against Peterborough.

“To hear first-hand his pre-match speech to the fans in the Speroni Restaurant was a really special moment. It captured his emotion, passion and humour all at once and I knew this would make a big impact in the final piece.

“To then sit close by him for the entire 90 minutes that followed was both entertaining and terrifying - at one point I thought that bottle of water was heading straight for me after another missed Palace chance!” 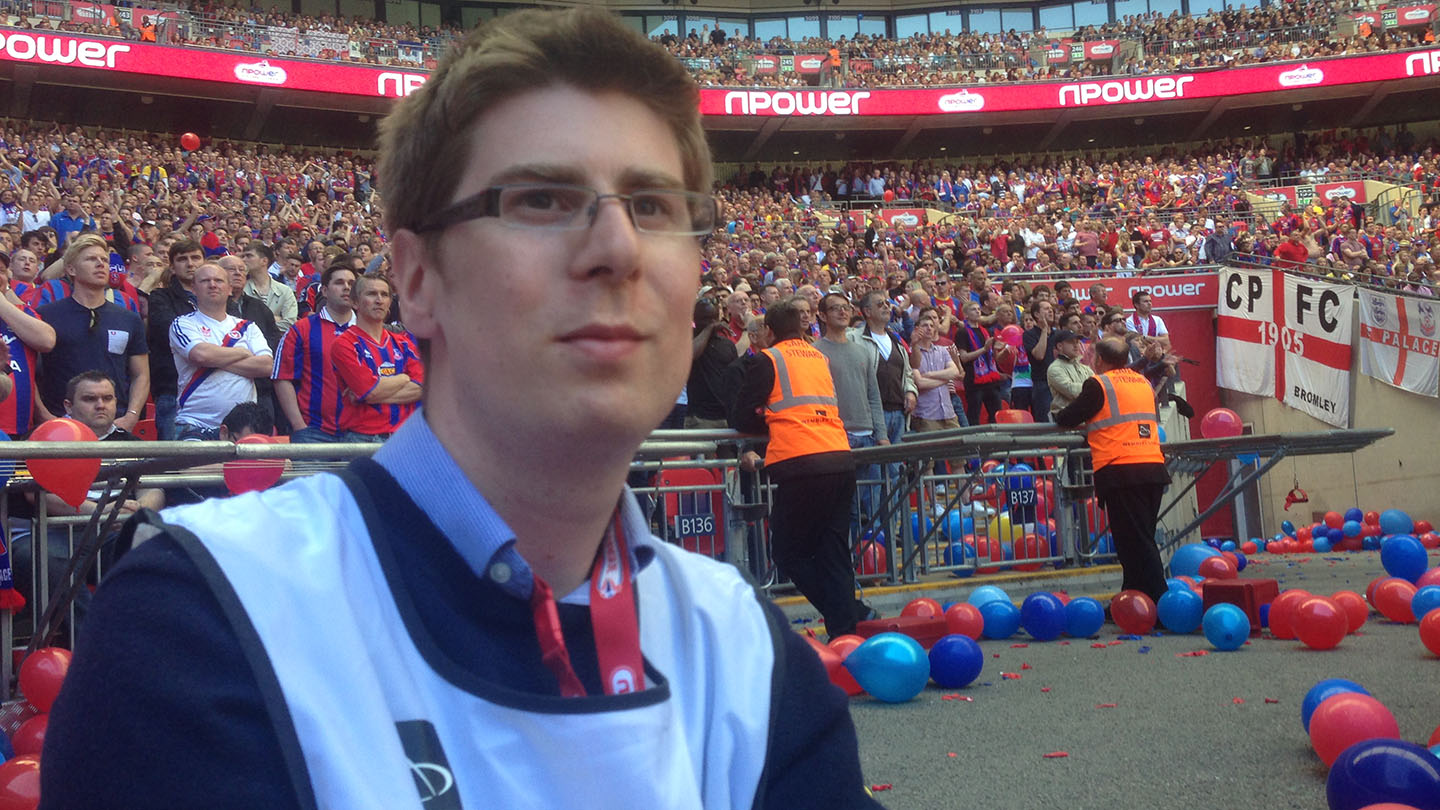 Joe can be seen at several points in the documentary, microphone in hand and talking with players at key moments. One of the standout times saw him interview Wilfried Zaha almost immediately after the young winger had fired his team to Wembley.

“We’d made a beeline for him [Zaha] straight after the final whistle and it just so happened that we got him before Sky – we got their prime-time interview. Dan’s sort of kicking me because the Sky Production Manager is telling me to hurry up, basically, because the Sky feeds had to pan away when we got Wilf.

“Raw emotions of just amazing euphoria for both of us. It was incredible; we were behind the goal with the Palace fans behind us… It was definitely the highlight of my career, that night.”

“That journey back on the M23,” Dan adds, “absolute gridlock, and we just blasted the music out. We were just absolutely high on life, like every Palace fan coming back. It was one of the best away days I’ve ever seen or been to.”

Neither Dan or Joe are Palace fans or even south Londoners – though Dan made a childhood move to support the Eagles only for his Dutch, Ajax-supporting father to quash the thought – but were swept up in one of the most gripping seasons in club history. 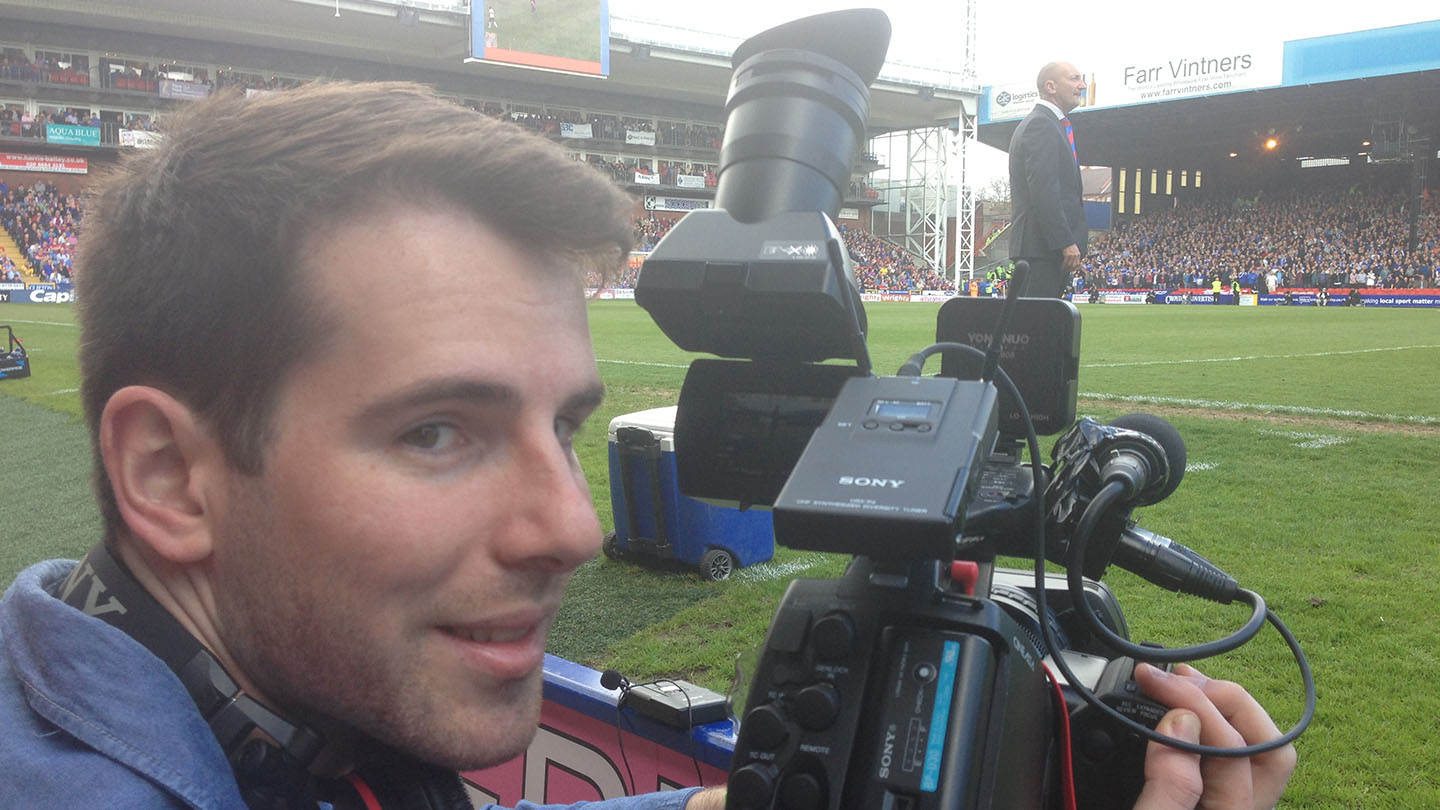 After a dramatic Wembley finale, Dan and Joe spent summer working the documentary into its first full version. But then “it got put into the long grass and shelved,” as the club’s priority shifted towards consolidating Premier League status.

Then - another chance moment in the story - Dan reignited interest in 2019.

“I got in touch with Steve and said: ‘You’ve been in the Premier League for five years now, quite a steady team there. How about we dust this down and get it out there?’ He said: ‘I’m not promising you anything, Dan, but I’ll put you in touch with James [Woodroof, Chief Marketing and Communications Officer].

“These guys were all new, we hadn’t worked with James, Chris [Grierson, producer] or Sean [Webb, editor]. It was fresh eyes on it and James got back to us and sort of said: ‘Where’s this been?! Why am I just seeing this?’”

Dan and Joe shared their original documentary and entire footage with the club’s in-house production team, Palace TV, who set about capturing their own interviews and re-working the documentary into that seen today.

“We hoped something like this would come,” Dan says. “We thought it had the potential. It’s been put together superbly by the team and the new interviews have added so much to it. It really tells a story.”

Joe shares the sentiment: “They’ve done a really good job. Especially the first episode, with a bit more of the background. The standout episode for me was episode four: Brighton away. Just crazy. That’s just fantastic, that episode.

“It was a nice mix of some of the old interviews with Ben Bailey Smith, Kevin [Day], Mark Steel and the new ones – Zaha’s was fabulous.”

Though he admits disappointment that the steady flow of fan messages will soon end - “‘What’s happened to the documentary? Why’s it not released? When’s it going to be released? What’s wrong with you?!’” – Dan looks back fondly on a protracted journey from modest beginnings to a worldwide docuseries.

“We’d like to thank Steve and the club for the opportunity back in 2012. Despite its release date being pushed back, the experience of producing it taught us a lot and helped open up further opportunities within the sports media world.

“It was a rollercoaster journey and a huge labour of love for us and we’ll always hold special memories of our time capturing that incredible season for CPFC.

“When we look back to when we walked in to do a ‘day in the life’ of Steve Parish at Palace against Blackburn, we never imagined we’d be here today with five episodes on Amazon Prime with our names on the credits.

“It’s been an absolute whirlwind journey, and kind of reflects the team and that season – ups and downs, really high highs, and, in the end, a happy ending. We’re both very, very proud.”

READ NEXT: When Eagles Dare guide - Everything you need to know