Patrick Vieira shared a revealing insight into his instructions for in-form left-back Tyrick Mitchell before Crystal Palace take on Burnley, discussing the Academy graduate’s next steps in detail.

Vieira’s comments came after another commendable performance from Mitchell against Watford, when the 22-year-old looked solid at the back and threatening going forward, claiming an assist for Conor Gallagher’s first-half goal.

It was one of several impressive displays from Mitchell this season as he cements his place in first-team football. Discussing the defender’s abilities, Vieira said:

“I’m really pleased with his physical condition, the way he can play game after game and train every day and be on the field. At the same time he’s really young so that’s not an issue for him.

“He’s doing really well, improving a lot. The more games he plays at this level the better he’ll be. He still has a lot to learn but what he’s bringing to the team offensively and defensively is really good for us.” 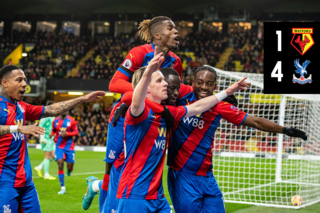 Elaborating on what can be improved, Vieira said: “We have to keep working with him. Offensively he can develop his crosses, to beat the first man. I will want him as well to read the game much more to get inside the box, be more dangerous. When the ball is on the right-hand side I want him in the box because he has the legs to get there. That comes with time.

“Out of possession, [he needs to learn] how to defend better crosses, how to close down people, how to work with the backline. All these details will come with the work we do on the field and for him to play more games.

“I think it’s about his confidence. Then talent is there, the work ethic there. He needs to believe more in himself to allow him to express himself and his talent. That will come with experience.”

Sticking with his back four, Vieira also explained how he feels Nathaniel Clyne has equipped himself in recent matches, with the right-back playing 90 minutes in each of the last two.

“Clyney has been doing really well the last two games he played,” the manager said. “He’s a different profile to [Joel] Wardy. Clyney likes to overlap, to go forward. This is his strength. The defensive part he’s doing really well as well.

“He didn’t play for quite a long time so the more games he plays the better he will feel and more confident he’ll be about himself. We need to be patient with him because he didn’t play a lot of games in the Premier League [recently]. He’s in a good place. I’m pleased and happy with what he brings to the team.

“Clyney is a bit more the profile of Tyrick. They both like to go forward. But we need balance, and that’s why I think Cheikhou Kouyaté was fantastic against Watford, because he can be there and stop the counter-attack.”

Another man who excelled for Palace against the Hornets was a third Academy graduate: Wilfried Zaha. Zaha took the game by the scruff of the neck by scoring twice in the final five minutes.

Vieira has called for the Ivorian to keep pushing himself this season, so was able to reflect on his Man of the Match-winning performance with a smile, saying: “The challenge is for Wilfried and for the team to be consistent in that kind of performance. There is no doubt about the quality and what he can do but when he’s like that it’s really good for the team.

“The challenge for us, for the team, is being consistent and creating those performances. When we play like that we create chances, score goals and manage to win the game. It’s important for us to challenge ourselves and keep that consistency.

“Wilfried at Palace is at home. He’s been really good for this football club and I strongly believe he still has a lot to give. Since he came back from the Africa Cup of Nations he’s wanted to take the team forward. The team are responding really well.

“What was important for me was the work ethic he had out of possession. He worked well with the other players around and that allowed us as a team to be stronger; when we’re stronger he can express his talent and we know what he can do.”

Finally, the manager was asked if, at 29, Zaha is at his footballing peak. Vieira explained that he was, but that he can sustain that level with his work rate and physicality.

“I think Wilfried is a young 29-years-old. Physically he’s fantastic because he’s every day on the field, he loves being on the field to play games. I believe he still has a couple of years at a high level. I believe he’s at the peak of his game, he’s got the experience, been in the league for quite a while and it think there is still more to come.

“He can be more decisive, score more goals and is putting all the support he needs around him to do well. I believe he is at the peak of his game, regarding age, position and talent.

“He knows himself really well. He manages himself in training, and on the field. In the game he knows the strong periods where he can make the difference. He understands the game really well and [is] an international player. So he has all the attributes to really do well from now until the end of the season.”