Patrick Vieira revealed his instructions for Wilfried Zaha before the Ivorian bagged a remarkable goal to seal three points for Crystal Palace against Southampton.

Vieira had started Zaha on the bench for the Saints clash to allow his recovery following a bruising game with Leeds United, but brought him on after 64 minutes with the two teams level at 1-1.

With barely a minute left on the clock, Zaha received the ball with his back to goal on the edge of the box, turned and beat four markers to strike home and secure victory.

Vieira told Palace TV what he wanted from the No.11 when introducing him to the match: “We put him in the No.9 [position] because of his mobility and the fact he can hold the ball and run in-behind. There was a massive space between the two lines of four that allowed him to drop and get the ball at his feet. 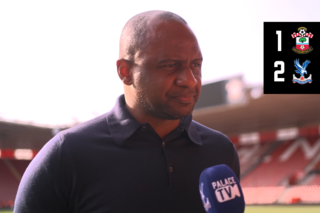 “And we know how dangerous he can be running in-behind as well, so he just needed a half-chance to put it in the back of the net. The game against Leeds he was unlucky, and today he showed how good he is and he is a really top goalscorer.”

Addressing another tactical point, Vieira explained what allowed Eberechi Eze, who also scored in sublime fashion, to swap with Jeffrey Schlupp, with the pair moving in and out as the game unfolded.

Vieira said: “Jeff was inside and Ebs wider, but both of them can play inside or outside, so I gave them the freedom to find the space. They could change position regarding where they were on the field and they did it really well, they combined really well.

“Where we had Jeff running in-behind and he had a couple of crosses and combined with players and I think that allowed us to create more chances.

“I think we knew they were going to press us really high and it was important for us to keep moving the ball quick from one side to the other side. I think we did it really well. We started the game in a positive way and conceded a goal we should avoid. We showed character to get back and win at the end.”

Finally, Vieira has asked his squad to sustain their standards and drive through to the end of the season. He said the Saints game showcased their reaction to that:

“This is the character we want as a football club. We know we are capable of doing it at home. The only question mark was: can we do it away from home? We did it a couple of times but there was inconsistency in these kind of performances and today we answered it quite well.