Zaha earns W88 Player of the Month for three-goal April

Wilfried Zaha has been named Crystal Palace's W88 Player of the Month for April after scoring three times for the Eagles.

Zaha netted most recently against Southampton to secure three points in a comeback win, and also bagged in a 3-0 victory over Arsenal and the 2-1 loss to Leicester City.

He helped the south Londoners to two wins and a draw from six, and played the full FA Cup semi-final at Wembley. 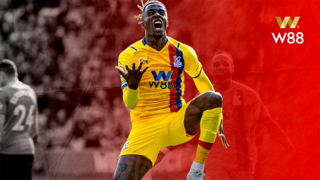 In the league he played 90 minutes in every match bar the Saints one, when his 64th-minute substitution won the game.

"Thanks for voting for me," he said to supporters. "I really appreciate it."

Zaha was presented his trophy by Palace legend Geoff Thomas, who joined the squad at the Training Ground to promote his upcoming Tour de France ride for Cure Leukaemia. He also handed Zaha his FIFA Team of the Week card, with the Ivorian and Tyrick Mitchell both earning the accolade.