U18s Report: Young Eagles fight back twice to earn a point at Chelsea

On a sunny Saturday morning at Cobham, Crystal Palace Under-18s came from behind twice in the first-half to earn a hard-fought point against Chelsea. 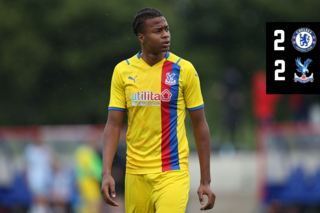 A week on from the 3-0 victory over Reading, the young Eagles travelled to Cobham to face Chelsea in their final away game of the season.

With on outside chance of the title in mind, Rob Quinn made three changes to the side. Leading goalscorer Victor Akinwale returned to the starting XI in place of David Obou, whilst Matty Vigor came in for David Ozoh. Owen Goodman returned between the sticks, in place of Laurie Shala.

The two sides cancelled each other out for the majority of the opening 25 minutes, however on the half-hour mark, Chelsea took the lead.

Chelsea forward Tudor Mendel-Idowu headed in from close range, following a Brodie Hughes cross after a well worked move from inside their own half.

Palace looked to respond immediately and nearly did so through their first notable attack of the half. A frenetic move down the left hand side saw left-back Vonte Williams push into space to float a ball intowards Ademola Ola-Adebomi, however his header was just wide of the mark.

The young Eagles were on the front foot and with five minutes remaining they managed to draw level. Akinwale got on the end of a Maliq Cadogan cross, which beat the defender and ‘keeper, to tap home his 25th goal of the season from inside the six-yard box.

All of Palace’s hard work to level looked to have been undone mere minutes later as Louis Flower put Chelsea back in front in the 44th minute. Hughes again put a dangerous ball in to create the chance.

The Blues’ second came as the fourth official announced that there would be two minutes of time added on - enough time for Palace to level once more.

Vigor whipped in a delightful ball from a corner which Ola-Adebomi got on the end of. The forward reacted quickest at the far post, charging in through the Chelsea defence to head home the equaliser with mere seconds remaining.

Following the Chelsea kick-off, the first-half ran over the allotted two minutes of stoppage time and Palace nearly secured a third. Fionn Mooney won the ball back and charged forward to feed Ola-Adebomi, the striker’s shot was deflected and almost crept past goalkeeper Ted Curd before it bounced back off the post.

After the break, Palace came racing out the blocks in search of a third goal to get their noses in front for the first time.

Tenacious work from Vigor inside the Chelsea third saw him win the ball back near the edge of the box and get a shot away, though went narrowly wide of the mark.

On the hour mark, Palace came agonisingly close to going in front. A pass through the lines from skipper Joe Sheridan picked out Josh Addae on the Palace right. The full-back slipped in Cadogan, who in turn cut it back across goal to an unmarked Ola-Adebomi inside the box.

The forward’s first-time effort on his right foot cannoned back off the woodwork and was eventually cleared away by the scrambling Chelsea defence.

Following that chance the game ebbed and flowed and almost settled into a rhythm of sorts, as both sides settled down after a frantic end and start to either half.

Mooney and Ola-Adebomi had half-chances to secure all three points as the game headed towards full-time, however it was second-half substitute Junior Dixon who had the pick of the bunch.

Dixon rose highest to get on the end of a Williams cross, deep into stoppage time, though his header didn’t have enough purchase and was saved by Curd.

The referee brought an end to proceedings shortly after his chance, and the result means that the young Eagles remain in third place. They can no longer win the title, however they will look to finish the season strongly and consolidate third place in the two games that remain.