Planning a tour: how sports science keeps jetlag at bay

It is a lot to pack into two weeks: a trip across nine time zones, four long-haul flights and three high-intensity pre-season fixtures. Even for professional athletes it can be a tough schedule, but the key to staying at the top of your game may be in the science.

"It’s been nearly six months of work [since] we knew we would be coming here,” says Cedric Leduc, first-team sports scientist.

“From operations to coaching, sports science to strength and conditioning, everyone did a huge amount of work to make sure the players were in the best condition possible for those three games.”

“We’ve had two weeks to try and build up for this week,” Michael Eglon, Head of Sports Science. “We play quite a lot of fixtures over the next two weeks, so there will be less opportunity to train here – but we’ll get a lot of work in by playing games.

“We’ve done a lot of monitoring during the pre-season so far, and we’re seeing quite similar levels of fitness to what we would see during the season.

“Obviously there are some players who still need some work, but we’re in quite a good place.”

Listen to the Tour Daily podcast

One of the major components of a foreign trip is dealing with the considerable jet lag.

“When you go to that side of the world, it is tougher to adapt,” explains Legun. “You need one day per time zone crossed, so seven days. But we’ve done a good job before, so hopefully now within three or four days we will be alright.

“To facilitate this, what we’ve been doing is to give the players the opportunity to sleep. What happens when you travel is that you’re going to wake up during the night. When it’s midnight here, it’s 1pm at home. Try to sleep at 1pm – it’s pretty tough, isn’t it?”

One solution, although it may seem unlikely, is enforced napping.

“You have an optimal window to nap which is past lunch,” he says. “Post-lunch, between one and three o’clock, for between 20 to 90 minutes is the time to have a good nap.

“If you sleep later, though, it might affect your subsequent night of sleep. It can be a good tool, but it has to be timed perfectly.”

Part of Eglon’s preparations was to subtly introduce the change in time zone long before departure. 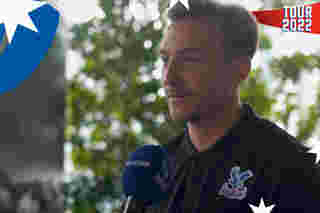 “We trained an hour early before we got here, which would force the players to wake up earlier. Therefore, when we arrive in Singapore they are a little bit more tired towards the back end of the day when they arrive.

“Other things are to match your time zone when you’re on the flight. When we got on the flight it was 4am Singapore time, so our recommendation was to sleep immediately and then wake up for the second half of the flight.

“That then makes sure they have the whole day on Singapore time.”

For more detail on the sports science behind the pre-season tour – including the reasoning behind ‘compression stockings’ and the importance sleep for professional athletes – listen to Cedric Legon on the Tour Daily podcast HERE, or watch Michael Eglon’s Palace TV interview, coming soon.