Check out Vieira leading training with behind the scenes footage

Patrick Vieira led his first training session as Crystal Palace manager on Monday, as the Eagles squad returned to Beckenham in preparation for the 2021/22 season. You can see behind the scenes from his first sessions at the club in the below video. 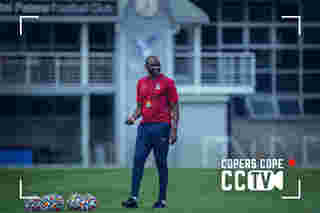 The new manager, who was announced on Sunday, met his team and staff for the first time at Copers Cope and took the lads through a double session on a busy first day.

Check out the day's best snaps in the gallery underneath!

Vieira was supported by Academy coaches and former players Paddy McCarthy and Shaun Derry, who temporarily took time out from their duties with the Under-18s and U23s to help run training. Vieira’s full backroom staff will be confirmed in due course.

Also hitting the pitches were several Academy players – joining their coaches for a session with the new boss, who took the chance to assess some of the club’s up and coming prospects.

Monday marked the first time since 23rd May that the squad has been together, and comes 40 days before the Premier League returns on August 14th.

Vieira’s first confirmed match in charge of the Eagles will be a friendly against Portsmouth on July 16th, with his first league challenge being away to Chelsea on the 14th.

The staff and players also wore the 21/22 training kit for the first time – you can get your hands on it here.