From management to youth teams: Find out Palace's England links

Crystal Palace have made recent headlines for having three players in the senior England squad. No team bar Manchester City has more.

Joining Conor Gallagher for games with Switzerland and the Ivory Coast are Marc Guéhi and Tyrick Mitchell, with both players called-up for the first time.

But it's not just on the pitch with the senior squad that Palace are involved, with management staff and youth team players also developed through the club.

It's a truly proud time to be a Palace supporter following England. See why below.

Gallagher, Guéhi and Mitchell become the first Palace trio since the 1990s to fill England's ranks. That era had Ian Wright, John Salako and Geoff Thomas as FA Cup finalists and Full Members' Trophy winners, guiding Palace to third in the top-flight.

Fifteen players have earned England caps while representing the club, meaning this season alone the number could have grown by over a fifth.

Upon receiving his call-up, Guéhi said: "I don’t have the words. It’s fantastic to be called up to be a part of it. I’m just really proud."

Mitchell's views were similar: "Wembley is so close to home so to be called-up for England and be around it and be in Wembley stadium is literally a dream come true."

Their success at Palace this season means we've seen scenes like the below for the first time.

Southgate made his name at Palace, rising through the Academy ranks under Alan Smith and breaking into the first-team in the early 90s having been signed in 1984.

He returned in 2021 to open the club's new Academy, saying: "For me everything started here as a 14-year-old schoolboy. Hopefully that gives some of the lads in the Academy and the parents and the people that work here the belief that you can start here, and you can have an international career with England.

"You’ve managed to create an elite facility but keep that feel of closeness which Palace is all about.

"The obvious thing to say is that it’s a long way removed from Mitcham, where I started. If we wanted to train in the afternoon we were running out of hot water. And the canteen was meat pies and sausage sandwiches and that was it – until [Alan] Smithy decided pasta was the way forward, which was revolutionary at the time!

"It’s a long journey for the club. Does a building in itself create a fantastic environment and culture? No, it doesn’t. In the end that’s going to be down to people." 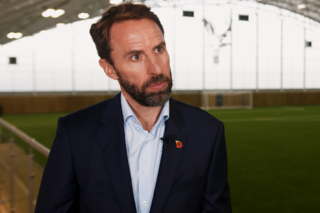 But Southgate's not the only one from the England management team to have come through at Palace.

Chris Powell, the Tottenham Hotspur coach, has worked with England since 2019 and played a key role in reaching the European Championships final last year.

He signed for Palace in the 1980s as a teenage trainee. He made only five senior appearances but spent three valuable years developing at the club, joining Aldershot on loan in 1990 before moving to Southend United.

There Powell became a cult hero, making 290 appearances. He attained similar status with Charlton Athletic and played an impressive 763 games across his career.

The south Londoner said of Mitchell in an interview with the South London Press: "I had a really good chat with him, just full-back to full-back. I told him I was the left-back at Palace way back in 1986 when I joined. He raised his eyebrows – he wasn’t even born!

"It is a nice link, for me and him. I asked how he felt after training. He’s adapted and looked comfortable, which is very important."

Finally, goalkeeper coach Martyn Margetson worked with the club from the start to the end of 2017 under Sam Allardyce, Frank de Boer and Roy Hodgson.

The Welshman was a player with Manchester City and Huddersfield Town amongst otherwise.

Palace have a three players in the England youth teams, with Jesurun Rak-Sakyi and Luke Plange named in the Under-20s and Jack Wells-Morrison called-up to the Under-18s.

Having succesfully graduated to the Under-23s this season, Wells-Morrison travels with England Under-18s for friendlies against Sweden and Denmark.

Development forward Rak-Sakyi and January signing Plange - who is currently back on loan at Derby County - are part of the squad to take on Poland and Germany.

Rak-Sakyi has been impressing for Paddy McCarthy's Under-23s side this season, scoring 15 times in 21 games and winning the Premier League 2 Player of the Month award for February.

Meanwhile Plange, who signed for Palace in the winter transfer window but returned to finish the season at Derby County, has scored three times in nine Championship appearances since breaking into the first-team.