Crystal Palace bid goodbye to the first season of the Patrick Vieira era with a historic victory over Manchester United on the final day – look back at an entertaining and exciting campaign below.

Make sure to renew your Season Ticket or join our waiting list to be there in person for more of the same in 2022/23.

For those Palace fans fortunate enough to follow the club up and down the country, there was no shortage of spectacular strikes to savour.

The south Londoners finished with a positive goal difference for the first time in the Premier League, a demonstration of their attacking prowess as well as their defensive solidity.

It took some time for Vieira’s men to find their feet going forwards, but Conor Gallagher got the new era underway in earnest with two fine strikes at West Ham United – and the Eagles never looked back.

After the new year the Palace front men kicked on. Michael Olise struck at The Den to start Palace on their long journey to Wembley, before a sumptuous team goal at the Amex sent the travelling fans into ecstasy.

Meanwhile Wilfried Zaha was en route to his most prolific Premier League season, the highlight being a rasping 25-yard curler into the top corner at Carrow Road after cutting inside; he repeated the goal a week later against Watford, and scooped Goal of the Season for the former.

Perhaps the most dramatic however was his 92nd-minute winner against Southampton, and he rounded off the season in style with a clever solo strike against Manchester United, passing two defenders before slotting into the bottom corner. 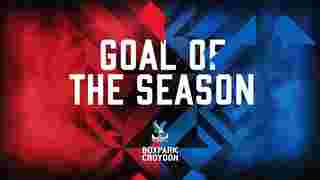 Palace’s goalscoring form was complemented by their defensive solidity – in no small part down to summer arrivals Joachim Andersen and Marc Guéhi.

The two centre-backs started 35 times together this season in all competitions, developing a strong partnership on and off the pitch as Palace matched their record for Premier League clean sheets.

Indeed Vieira’s side kept six home clean sheets to finish the season, including in games against Manchester City, Manchester United and Arsenal.

Guéhi, just 21-years-old, was also the youngest captain in the Premier League ahead of Arsenal’s Martin Ødegaard as he filled in when club captain Luka Milivojević was unavailable.

After sharing full-back duties with Patrick van Aanholt last season, Tyrick Mitchell was the first choice on the left side of defence under Vieira – the latest Palace Academy product to reach the senior XI.

He quickly became a crucial part of the team, with only Guéhi (41) having made more than Mitchell’s 39 appearances in the season.

It was also a breakthrough year for Academy youngsters Jesurun Rak-Sakyi and Tayo Adaramola. Rak-Sakyi made his debut against Chelsea in August, before bookending the season with a first start against Man Utd on the final day.

Adaramola, meanwhile, was a part of Palace’s run to the FA Cup semi-finals, featuring against Hartlepool and Stoke City at Selhurst Park.

Both players spoke about their whirlwind season on the Official Crystal Palace Podcast, which you can check out HERE.

It was a fantastic year for the club in south London, with several famous victories forever embedded in the supporters' minds.

The first major result came in September, as Palace dismissed Tottenham Hotspur 3-0 to secure the first victory of Vieira’s tenure. Edouard announced his arrival to the Holmesdale, scoring within 28 seconds of coming off the bench for his debut and adding a second shortly after.

It was the fastest debutant substitute goal in Premier League history. 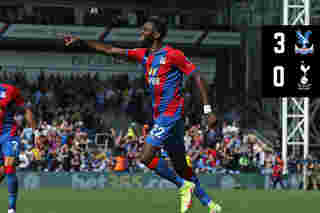 A superb win against Everton kicked off the festive period in style, but it was in the new year that Selhurst Park came into its own.

After holding Manchester City to a goalless draw – and thus becoming the only side not to concede to Pep Guardiola’s team this season – Palace put four past Everton to secure their place in the FA Cup semi-finals.

A fortnight later Selhurst Park was rocking once again, as Arsenal were put to the sword under the floodlights. 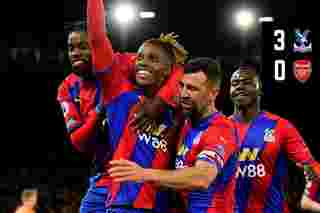 Then, on the final day, Palace secured their first victory over Manchester United at Selhurst Park since 1991, with Zaha scoring the winner and ending Palace’s season on a high.

What an achievement for Marc Guéhi, Conor Gallagher and Tyrick Mitchell to make their senior England debuts this season. All three were recognised by Gareth Southgate for their form at Crystal Palace, meaning for the first time since 1991 there were three players from SE25 in the national squad.

On top of results on the pitch, it has been a season full of wonderful occasions around the football club.

The highlight for so many fans was a trip to Wembley in the FA Cup semi-finals, as Palace reached the tournament's final four before losing to Chelsea. Despite the result, the Selhurst faithful turned the stadium red and blue to give Vieira’s side support they will never forget.

It wasn’t just the semi-finals, however. The fourth-round match-up with Hartlepool United proved a special afternoon for both sides, as Palace fans demonstrated their generosity by donating to the fund for manager Graeme Lee’s wife’s medical treatment.

There was also plenty to be proud of from Palace for Life Foundation. The first-team squad hosted the Down’s Syndrome Eagles – a team of Palace-supporting players with Down's Syndrome ranging from primary school age to their early 20s – at a training session.

They spent the morning watching their heroes train, before grabbing photos and autographs and even taking penalties against Jack Butland. 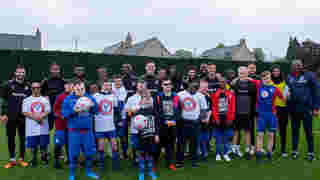 There was also the launch of the Made in South London campaign, an effort to raise £1 million over the next three years to transform the lives of over 3,000 additional young people.

The first-team players and Vieira got involved in the making of the launch film, with Guéhi, Eberechi Eze, Zaha and Joel Ward walking the streets of south London with Ben Bailey Smith (AKA Doc Brown). 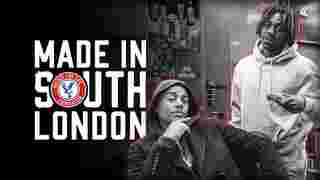